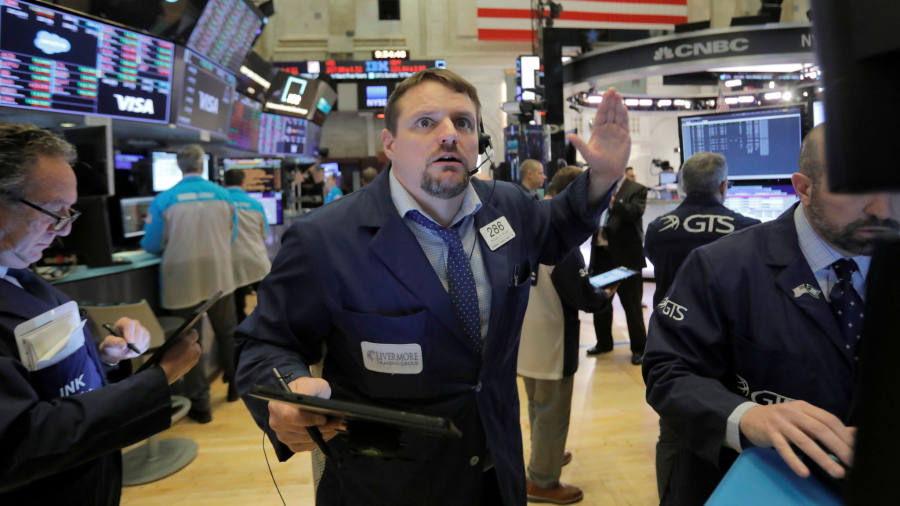 The main index of US stocks came to the brink of a bear market on Wednesday and the blue-chip Dow Jones Industrial Average did tip into bear territory, after the World Health Organization called the coronavirus outbreak a pandemic for the first time.

The Dow dropped 5.9 per cent, marking a fall of more than 20 per cent from its high last month that traders refer to as a bear market — calling time on an 11-year bull run. The broader S&P 500 fell 4.9 per cent, erasing Tuesday’s 4.8 per cent gain and ending just short of a bear market.

“The end of the bull market in stocks is upon us,” said Chris Rupkey, chief financial economist at MUFG Union Bank.

The Dow’s outsized fall was partly the result of an 18 per cent drop in Boeing on news the company had drawn down the full amount of a $13.8bn loan, further raising concerns over corporate credit. In late afternoon trading, Bloomberg reported that private equity group Blackstone had asked its portfolio companies to tap credit lines to avoid a potential cash squeeze.

The previous day’s stock market rally had been driven by hopes for tax cuts and other measures to stimulate the US economy, but the White House has since divulged little detail. Democrats have voiced opposition to a proposed payroll tax cut.

“A gap may be about to open up between US and European market performance, reflecting the lack of policy action from the US government,” said Seema Shah, chief strategist at Principal Global Investors. “Powerful, co-ordinated, policymaker action may be the US economy’s best chance of ensuring that this shock does not evolve from a shortlived hit to a prolonged and devastating downturn.”

Analysts at Goldman Sachs said they believed the bull market in US stocks “will soon end”. It now expects the S&P 500 to drop by around 15 per cent from current levels by the middle of this year, to mark a 28 per cent drop from the latest peak.

“Both the real economy and the financial economy are exhibiting acute signs of stress,” Goldman said.

Investor nervousness was also evident in European and Asian markets, many of which ended with small declines on Wednesday. The Europe-wide Stoxx 600 fell 0.9 per cent, having jumped almost 2 per cent earlier, while London’s FTSE 100 index finished the day 1.4 per cent lower despite dramatic action from the Bank of England.

Early in the European trading session, the central bank delivered a surprise series of measures to tackle the impact of the virus, including chopping the main interest rate by half a percentage point.

Paul Dales, chief UK economist at Capital Economics, said the BoE had “pulled the trigger on its double-barrelled shotgun”, and that while the move would not stop the economy stagnating or contracting in the second and third quarters, “it will help to ensure that the economy can bounce back . . . once the virus has peaked”.

“There is a very grim sense of foreboding,” said one Tokyo-based broker, “the real risk is that, in the coming weeks, we start to see redemptions from some of the big long-only funds pushing entire markets lower.” Tokyo’s equities benchmark Topix fell 1.5 per cent.

Stock markets elsewhere in Asia-Pacific were also weaker. Australia’s S&P/ASX 200 closed down 3.6 per cent even after the government announced a $1.6bn health package to combat the spread of coronavirus. Hong Kong’s Hang Seng slipped 0.6 per cent, while China’s CSI 300 dropped 1.3 per cent lower.

Some investors warned that tumbles can become self-fulfilling. “One of the risks in turbulent market conditions is being forced to sell assets to meet liquidity needs,” said Mark Haefele, chief investment officer at UBS Global Wealth Management.

Elsewhere in markets, oil fell after Saudi Aramco announced it would increase its crude production capacity from 12m to 13m barrels per day, marking a further escalation of Saudi Arabia’s price war.

Brent crude, the international benchmark, settled down 3.8 per cent at $35.79 per barrel, having been up more than 5 per cent earlier in the day. Oil prices crashed by more than a quarter on Monday after Saudi Arabia launched an oil price war.