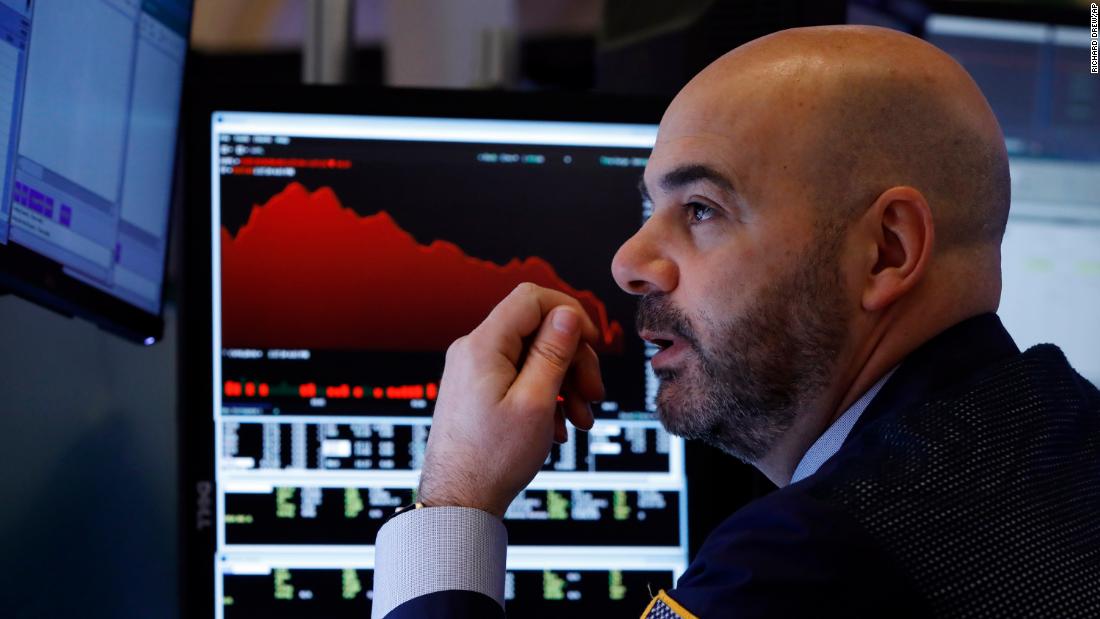 Stocks spent nearly all day in negative territory with the exception of a brief jump higher in the Nasdaq Composite. Market expectations that the Federal Reserve will step in to stop the selloff and boost the economy have shot through the roof after the dramatic week.

The lower close shows that investors are willing to hold their positions over the weekend, which signals that the coronavirus -linked selloff might continue. Coronavirus fears have also clobbered the energy market as investors brace for a collapse in demand for everything from jet fuel to diesel and motor gasoline. Decreased factory activity in China, where businesses shut to contain the outbreak, is also weighing on prices.

Crude oil, which is often viewed as a real-time barometer of economic growth, has plunged deeper into a bear market. US oil plunged 4.9% on Friday to $44.76 a barrel. Crude hasn’t closed below $46 since December 2018. The commodity is on track for its sharpest weekly decline since 2011.

Gold, which is traditionally a safe haven during times of market trouble, sold off too. Market participants attribute the drop to investors pulling cash out of their gold investments to counter their losing stock investments. Gold futures settled 4.6% down at $1,564.10 an ounce, recording its worst one-day percentage loss since November 2016.

Treasury yields slipped further and hit new record lows on Friday as investors piled into the safe haven government bonds. Bond yields and prices move opposite to each other. The 10-year bond yield dropped below 1.15%.

Fed to the rescue

The Federal Reserve is in focus on Friday, after expectations for an interest rate cut at the March 18 meeting spiked to 100%, according to the CME FedWatch Tool. Expectations for a half-percentage point cut have shot higher over night. They were at 52% after the Friday close, having spiked over 90% in the afternoon. Expectations had been at zero on Thursday.
Even though the next Fed meeting is three weeks away, the central bank could meet earlier for an emergency rate cut, said analysts at Bank of America Merrill Lynch Friday afternoon. The last emergency rate cut took place in 2008.

But the speculation about a rate cut also implies that the economy could be worse off than widely believed.

“If the Fed need to intervene, how bad is the situation?” said David Madden, market analyst at CMC Markets.

That said, various Fed officials have so far said rate cuts are not yet necessary.

Fed Chairman Jerome Powell called the fundamentals of the US economy strong in a statement Friday afternoon. He said the central bank was closely monitoring the outbreak and its economic implications, and will “act as appropriate to support the economy.”
St. Louis Fed President James Bullard in a speech Friday that “further policy rate cuts are a possibility if a global pandemic actually develops with health effects approaching the scale of ordinary influenza, but this is not the baseline case at this time.”

The University of Michigan, which publishes the monthly consumer sentiment survey, warned on Friday that “domestic spread of the virus could have a significant impact on consumer spending.”

While the final read of February consumer sentiment beat expectations and rose to the highest level since March 2018, an increasing number of survey participants mentions the virus outbreak in the last days of February. Consumers are the backbone of the US economy and a drop in spending could hurt economic growth.

As the novel coronavirus continues to spread around the world, countries are scrambling to respond. Economists and investors are concerned about the outbreak’s impact on economic growth and corporate earnings. Various American multinational companies, including Apple (AAPL) and Microsoft (MSFT), have warned that they won’t meet their earnings guidance because of disruptions from the virus.