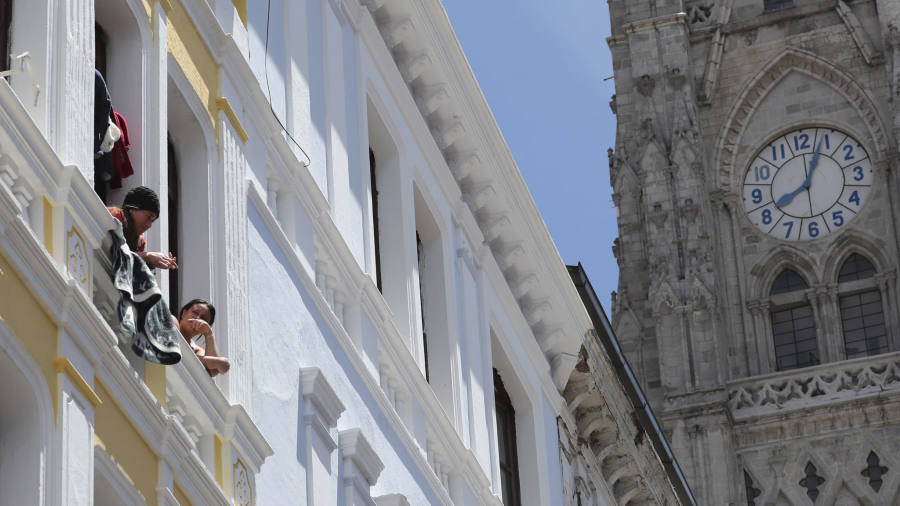 Ecuador has acknowledged it will fail to make coupon payments on three bonds due later this week but insists it will pay up within the 30-day grace period, as it scrambles for cash amid the Covid-19 outbreak and the crash in oil prices.

In an online press conference on Monday night, finance minister Richard Martínez said the government would make a $325m payment due on Tuesday on its 2020 bond, but needed more time to come up with $200m to service bonds due in 2022, 2025 and 2030. Coupon payments had been due this Friday and Saturday.

Ecuador’s financial woes have spooked markets, with the spread between Ecuadorean bonds and US Treasuries lately soaring to the kind of levels typically associated with default. The March 2022 bond was trading on Monday at about 24 cents on the dollar, according to S&P Capital IQ, from about 88 cents a month earlier.

The country has been hard hit by the coronavirus outbreak. It has the second-highest number of confirmed cases in Latin America, behind Brazil, and the highest per capita. Local authorities say 981 people have tested positive and 18 have died.

It has also been pummeled by the drop in the price of oil, which accounts for more than half the country’s export revenues. Uniquely in South America, the country uses the US dollar as its official currency, so it is hamstrung in what it can do to address the problem.

Furthermore, it is struggling to meet the terms of a $4.2bn loan agreed with the IMF last year, part of a broader $10.2bn package with multilateral lenders.

Within minutes of Mr Martínez’s announcement, the IMF issued a statement of support for President Lenín Moreno and his economic team.

It said it was talking to Ecuador about “a successor Fund-supported arrangement” to build on the $4.2bn Extended Fund Facility (EFF) loan. In the shorter term, the fund said it is considering an Ecuadorean request for further support via an emergency programme known as the Rapid Financing Instrument.

Siobhan Morden, head of Latin America fixed-income strategy at Amherst Pierpont Securities, said any new agreement with the IMF would need approval from Ecuador’s National Assembly, which on Sunday urged the government to delay its debt repayments.

“It’s unclear whether a revised EFF would be sufficient and whether the legislature would be co-operative,” she said. “If the commodity shock persists, then bondholder payments are at risk for default.”

Ecuador faces $4.1bn in debt repayment this year, although most of the burden falls in the second half. It has to repay $111m in April and nothing in May.

Mr de Sousa said an opportunistic default — as happened in 2008 — was not on the cards.

“Moreno and his economic team are aware that they have nothing to gain by acting unilaterally against creditors,” he said, adding that he considered “friendly” restructuring without enforced losses to be the most likely outcome.