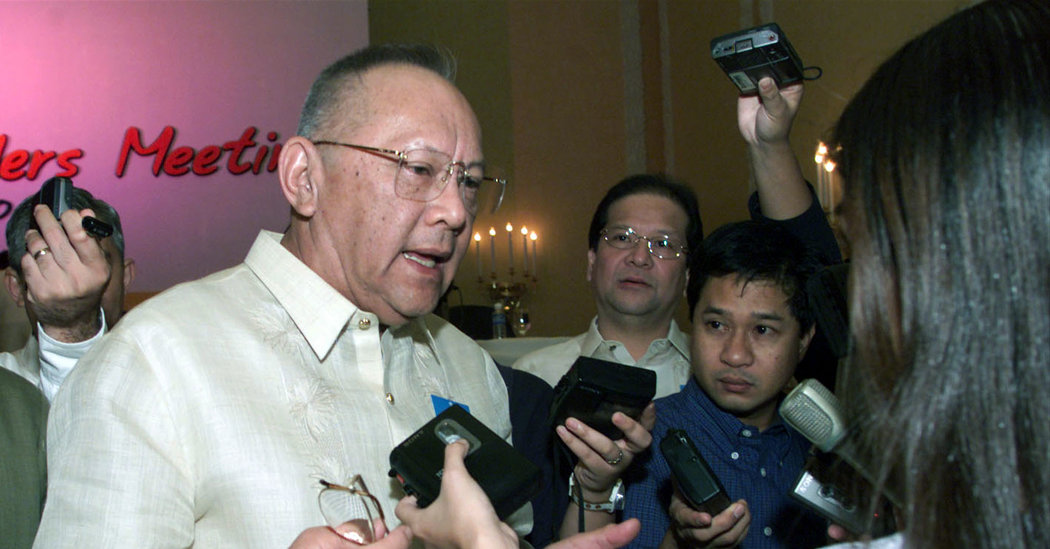 Eduardo Cojuangco, an ally of the Philippine dictator Ferdinand Marcos who fled with him into exile and then returned to take control of the San Miguel Corporation and build a billion-dollar fortune, died on Tuesday. He was 85.

His death was reported on Wednesday by San Miguel, where he served as chairman and chief executive officer, to the Philippine Stock Exchange. Local news outlets said he died Tuesday night from a lingering illness.

Known in the Philippines as “The Boss” and the “King of the Cronies,” Mr. Cojuangco served as a congressman, governor and ambassador before running unsuccessfully for president in 1992. But he wielded his greatest political influence behind the scenes, during and after the Marcos era.

In the process, he became one of the Philippines’ richest men, building on an early fortune acquired under disputed circumstances through a Marcos-era government fund that taxed coconut farmers.

He was a close friend and wealthy ally of Mr. Marcos and Joseph Estrada, two of the Philippines’ most corrupt presidents, who were both forced from office by military-backed popular movements.

A first cousin and rival of President Corazon Cojuangco Aquino, Mr. Cojuangco was dogged for years by allegations that he helped plot the assassination of her husband, Benigno Aquino, when Mr. Aquino returned to the Philippines in 1983 to lead the country’s opposition movement. He denied any role in the killing.

President Rodrigo Duterte, who in recent years has helped rehabilitate the Marcos name, expressed condolences at Mr. Cojuangco’s death. A statement issued by the president’s office praised Mr. Cojuangco’s “immense contribution to the socioeconomic development of the Philippines through the company’s operations in food, beverages, energy, power, oil refining and infrastructure.”

Ferdinand Marcos Jr., the former dictator’s son, bid him farewell in a tweet in which he referred to Mr. Cojuangco as “Tito,” or uncle. “You were a rock in my life,” he said.

Eduardo Murphy Cojuangco Jr. was born on June 10, 1935, into a powerful family in Tarlac Province, north of Manila. He was still in his 30s when he was elected as a congressman and then governor there.

Known to his friends as Danding, he became a close adviser to Mr. Marcos and was said to be part of the inner circle that planned to strengthen the dictator’s grip on the country by imposing martial law in 1972.

With Mr. Marcos’s help, Mr. Cojuangco built a fortune by taking over much of the country’s coconut industry. The government imposed a tax on coconut farmers. Mr. Cojuangco, who controlled the tax fund, was later accused of skimming several hundred million dollars to build his business empire. He denied any impropriety.

Mr. Marcos was ousted in 1986 and flown into exile in Hawaii by the United States Air Force. Mr. Cojuangco accompanied him on the plane and later was reported to be living in California.

Mr. Marcos is estimated to have stolen $10 billion during his rule. Little of it was ever recovered.

After the former dictator died in Hawaii, in 1989, Mr. Cojuangco returned to the Philippines. Although his passport had been revoked, he slipped back into the country, to the surprise of the government, which by then was led by his cousin, President Aquino.

Within days of his arrival, her opponents staged a coup and nearly succeeded in ousting her. Ms. Aquino accused her cousin of being a ringleader.

“The suspicious thing is that one week after he returned, there was a rebellion,” she said. “Our next election is not until 1992. Those who want to be president will have to wait until then.”

In fact, that was his next move. He founded a political party, the Nationalist People’s Coalition, and ran for president in 1992 on a ticket with a popular actor, Joseph Estrada, as his running mate.

In an interview with The New York Times before the election, Mr. Cojuangco said he admired Mr. Marcos, denied enriching himself at the expense of the coconut farmers and said he had no role in the assassination of Benigno Aquino.

Mr. Cojuangco placed third in a field of seven, but Mr. Estrada won the vice presidency, which is decided by a separate ballot.

In 1998, Mr. Estrada won the presidency as the candidate of Mr. Cojuangco’s party, once again giving the coconut and beer tycoon a powerful ally in the presidential palace.

During the Marcos years, Mr. Cojuangco had acquired shares in the San Miguel Corporation with money from his coconut enterprise. But after Mr. Marcos was ousted, a Philippine court denied Mr. Cojuangco the right to vote the shares because he was accused of acquiring them illegally.

After becoming president, Mr. Estrada helped him regain control of San Miguel by authorizing the return of shares held by the government.

Mr. Estrada was later forced from office for incompetence and corruption in 2001 and was eventually convicted of illegally accumulating wealth while in office. But Mr. Cojuangco held on to San Miguel and continued to expand and diversify the company.

At the time of his death, Forbes estimated his worth at $1.1 billion and ranked him as the 16th wealthiest person in the Philippines.

Mr. Cojuangco was an avid supporter of basketball and owned three teams through San Miguel, including the San Miguel Beermen. His death was mourned by the Philippine Basketball Association, which thanked him in a tweet for his contributions to the league and to sports.

Mr. Cojuangco is survived by his partner and their two children, as well as by four children with his former wife, according to local news reports.

In a statement mourning his death, San Miguel praised Mr. Cojuangco for guiding the company’s expansion and diversification.

“His vision for San Miguel — to be a beacon of hope for the Philippines and a partner in nation-building — remains at the core of everything we do,” the company said.