Elite Prep Schools, Set Back by Virus, Face a Quandary on Federal Aid 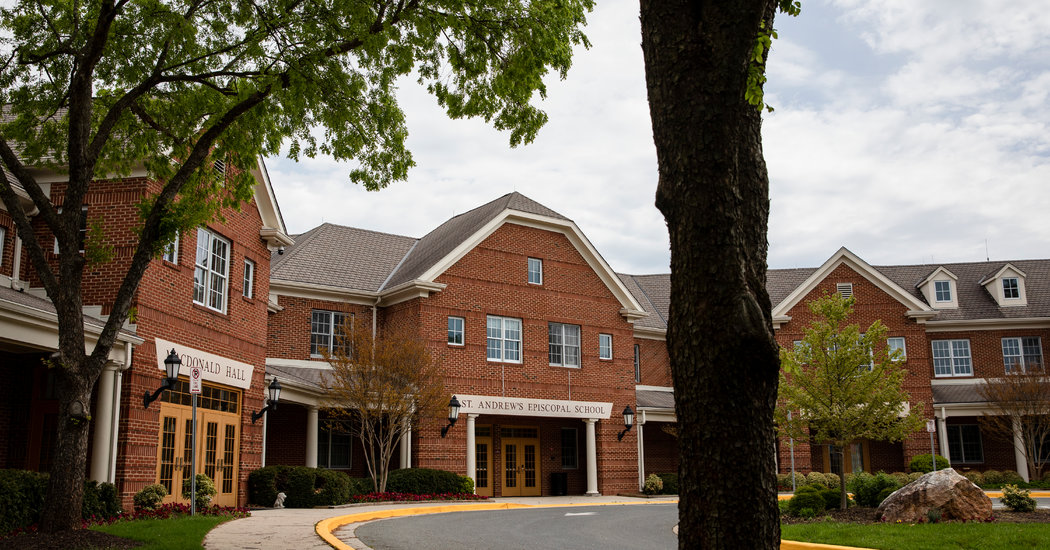 The Latin School of Chicago, which has counted the Illinois governor’s children among its students, returned the money. Sidwell Friends in Washington, the alma mater of President Obama’s daughters, decided to keep it. So did others, like St. Andrew’s Episcopal School in Potomac, Md., where President Trump’s youngest son is a student.

Across the country, dozens of elite private preparatory schools are facing a vexing decision: They qualified for federal funds for small businesses hit by the coronavirus pandemic, but administrators are considering whether the scrutiny of taking government assistance outweighs the benefits.

Several prominent companies, like the Shake Shack restaurant chain, secured some of the same federal aid meant to keep employees on the payroll but returned it after facing a public backlash.

The schools are now making similar calculations, particularly because some smaller private schools with little or no endowments missed out on the first round of funding amid bureaucratic hurdles.

Outside Boston, the Middlesex boarding school withdrew its application to the program, and Episcopal High School in Alexandria, Va., pulled out of the process as well.

“We thought it was not appropriate to move forward,” said Charles M. Stillwell, the head of Episcopal High School, which includes John McCain among its alumni and has an estimated endowment of $200 million. The school decided that it “should not seek this kind of support when others need it more,” he said.

But other elite schools said they needed the money to keep people employed, citing concerns about dwindling donations, shrinking endowments and a potential drop-off in enrollment.

The money comes in the form of loans, backed by the Small Business Administration, that can be forgiven if recipients put most of it toward payroll needs.

On Wednesday, the board of trustees at Sidwell Friends, Chelsea Clinton’s alma mater, said in a memo to the school community that it would accept a $5.2 million loan “in light of actual and anticipated shortfalls, mounting uncertainty” and “the importance of maintaining employment levels.”

“We recognize that our decision to accept this loan may draw criticism from some quarters of the community,” said the school, which has a $53.4 million endowment, “but are fully united in our decision.”

The Pingry School, with campuses in Short Hills and Basking Ridge, N.J., and a roughly $80 million endowment, said it would keep the money it had received to pay faculty and staff members, as intended by the federal program.

St. Andrew’s, in Potomac, which reported a roughly $9 million endowment in a 2017 tax filing, said it would put the money toward salaries “to ensure retention of our full faculty and staff, including hourly employees and coaches, during this very challenging and uncertain time.”

Neither school disclosed how much it had received in loan money.

Run by the S.B.A., the $660 billion assistance effort — formally known as the Paycheck Protection Program — has been troubled by technical glitches, partisan squabbling and widespread confusion over who is worthy.

Large public companies have leaned on their relationships with banks, which are issuing the loans, while many Main Street businesses like ice cream stores, salons and neighborhood restaurants have often found themselves left out.

That tension is playing out in miniature in the private school world. While there is no suggestion that any school used political ties to bolster its application, some bigger institutions are able to tap board members and donors with connections to banks.

“It’s kind of a wild thing that’s happening — you can see the pitfalls with the program,” said Jennifer S. Danish, head of school at Grace Episcopal Day School in Kensington, Md., which she said served mostly middle-class students. “If you have a board member or a connection with a big bank, you’re more likely going to get it.”

Ms. Danish said the school had not received assistance in the first round of applications this month, but she recently applied again and was hopeful the application would be approved. “We do not have an endowment,” she said. “We do not have reserves. We have debt. Our faculty is our greatest asset, and we want to make sure they get paid.”

The S.B.A. program, a centerpiece of the federal government’s economic stimulus package adopted last month, mostly offers loans of up to $10 million to companies with no more than 500 workers.

The S.B.A. issued new guidance alongside the Treasury Department recently, highlighting that borrowers “must certify in good faith” that their loan request is “necessary.” Of the more than 100 companies that have disclosed loans of $2 million, about 20 have vowed to return their funds, in response to both the new guidelines and public pushback.

On Tuesday, Treasury Secretary Steven Mnuchin threatened to hold big companies criminally liable if they did not meet the program’s revised criteria, and warned that the S.B.A. would audit companies that received more than $2 million.

Many private schools are receiving less than $2 million and insist they meet the program’s requirements.

A spokesman for St. Andrew’s, which Barron Trump attends, said in a statement that the money “will allow us to maintain our promise to support our employees and to help school families facing hardship remain” at the school next year. “We hope every other nonprofit and small business is able to access” the program, he said.

At Pingry, the head of school, Matt Levinson, concluded that the “economic conditions brought on by Covid-19 have presented significant challenges to our ability to serve our community.” He added that “we are grateful to have qualified for the PPP program, and appreciate that it will allow us to retain all our faculty and staff in a time of declining revenues, rising costs, and great financial uncertainty.”

John Burroughs School near St. Louis, which has a more than $50 million endowment and was attended by Shake Shack’s founder, Danny Meyer, qualified for a $2.55 million loan, according to its head of school, Andy Abbott.

Before the pandemic, it relied on a roughly $54.7 million endowment to support 10 percent of its budget. But the recent market downturn has caused it to lose more than $9 million dollars in value. Summer camps and events that bring in revenue have been canceled.

Mr. Abbott said the school planned to keep the money. The school needed the loan to support its operations, he said, and to avoid furloughs for its more than 200 employees and continue paying them benefits.

“The school has never applied for federal funding before, and we are extremely grateful to qualify for this loan at this unprecedented time to ensure we can support our employees, and our ongoing operations in a manner that is not detrimental to the long-term financial health of the school,” Mr. Abbott said in an email.

But in recent days, some schools that had initially made the same calculation to take the money have begun reconsidering.

The Latin School’s application sparked controversy among students and others from the community, according to its online student newspaper, The Forum. The site’s coverage was picked up by local media outlets like Crain’s Chicago Business, further putting the decision in the spotlight.

This week, the school, which disclosed a $58.5 million endowment in a recent tax filing, said it would return the loan, citing new guidance.

“With this decision, we stand in support of all the smaller businesses and nonprofits that need this support to keep their people employed,” Randall Dunn, its head of school, said in a statement.

Middlesex also reversed course, said its head of school, David J. Beare, in an email. The school — which has a $301.5 million endowment and such prominent alumni as Senator Chris Van Hollen, Democrat of Maryland — decided that “other organizations had more significant need for the limited funds.”

“We continue to offer a robust online learning experience for our students, and look forward to resuming normal operations as soon as possible,” Mr. Beare said.

Myra McGovern, a spokeswoman for the National Association of Independent Schools, a trade group, said that even the biggest institutions had lost donations and income from programs like after-school care and camps in recent weeks. Some are also concerned about losing students for next year.

“A school’s size or reputation does not necessarily translate into liquidity,” she said. “For schools whose budgets have been severely impacted by the virus, the ability to sustain payroll and pay interest on mortgage payments may be in jeopardy.”

Many schools also have restricted endowments, meaning the funds cannot be earmarked for teacher salaries, she said, explaining that “it’s not like having a big savings account that you can draw from at any time.”

Other schools, particularly some smaller and less endowed ones, are still struggling to get their applications reviewed. When the program launched in early April, the banks processing the applications struggled to keep up with the demand and navigate technical problems, causing some applicants to miss out on a first wave of money. Additional funds became available on Monday, but uncertainty and anxiety persist.

“There are plenty of schools that work on tight budgets, and there’s going to be a lot of heartache and a lot of closures across the country,” said Ms. Danish, of Grace Episcopal Day School. “Education is not going to be the same.”