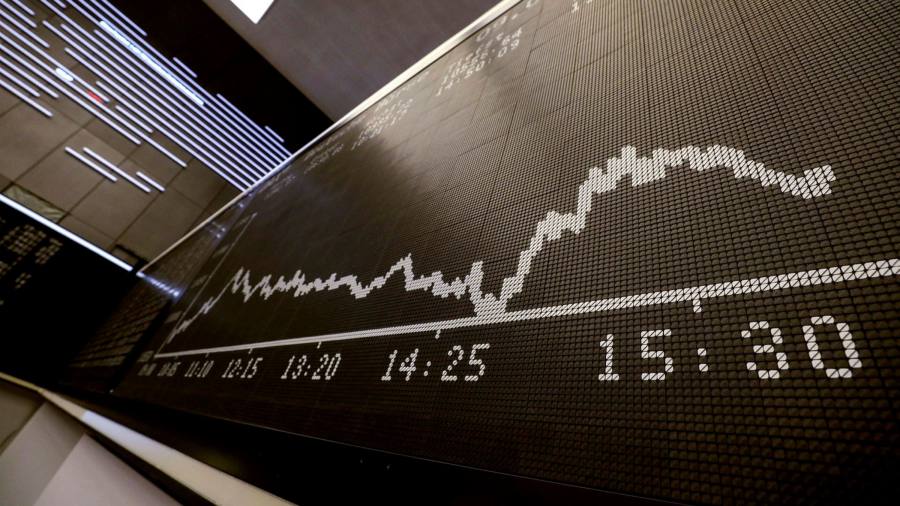 Global equities have gained further momentum as governments prepare to intensify their spending to prop up economies after the blow from coronavirus.

Major European markets including those in London, Paris and Frankfurt roared about 1.5 per cent higher on Wednesday, while the region-wide Stoxx 600 index rose 0.7 per cent. Futures tracking Wall Street’s S&P 500 were also up, climbing 1.2 per cent.

Markets have marched higher in recent weeks as economies around the world have begun easing lockdowns, with investors pinning their hopes on a swift rebound in business and industrial activity.

Investors have been also been cheered by a deluge of fiscal and monetary stimulus measures from countries around the world. Brussels plans to seek the power to borrow up to €750bn in a vast spending programme to pump money into the bloc’s worst-hit economies, the Financial Times reported on Wednesday.

This move would come on top of significant fiscal measures already deployed by EU member states individually and by other governments in countries such as the US, UK and Japan. Central banks have already sprung into action with rate cuts and large asset purchase schemes as part of efforts to juice up the global economy.

The government debt of Italy and Spain, among the hardest-hit European countries, rallied alongside the euro on Wednesday.

Travel and leisure stocks, which have been among the worst hit since the coronavirus crisis began, posted large gains for the second day. Shares in Tui, the tour operator, have surged more than 80 per cent this week, while cinema chain Cineworld has soared 50 per cent. But both are still down sharply for 2020.

Shares in European banks, which have also been hit hard amid concerns about how low rates will affect their profitability and expectations for a jolt in loans turning sour, also jumped on Wednesday. French banks Société Générale and BNP Paribas gained around 8 per cent, while the UK’s Royal Bank of Scotland was up 8.5 per cent and Germany’s Commerzbank climbed 7 per cent.

Still, several analysts and investors said they remained wary, given signs of a fresh bout of tensions between Washington and Beijing.

China’s currency fell by the most in three weeks in the wake of the country’s plans to impose a sweeping national security law on Hong Kong. The renminbi weakened by 0.35 per cent on Wednesday to Rmb7.16 to the US dollar, hitting its lowest level since September 2019.

Hong Kong’s Hang Seng index shed 0.6 per cent as demonstrators and riot police clashed. Protests that had been kept at bay by the coronavirus pandemic re-erupted following Beijing’s move and a separate law that could result in prison sentences for insulting China’s national anthem.

Beijing’s actions have rankled President Donald Trump and US officials. Mr Trump told reporters on Tuesday that he was “doing something now” on the Hong Kong issue and planned to provide further details in the “next couple of days”.

Investors in Hong Kong, a global financial hub, are concerned that Washington could retaliate by removing its special trading status with the US. Credit Suisse’s chief investment office warned that “volatility could continue as US-China tensions intensify”.

Lauri Halikka, a bond and currency strategist at Swedish bank SEB, said such sanctions would “most likely lead to retaliation from China and harm US-China relations even further . . . risking the progress made in the trade talks last year”.

Oil prices lost some ground after rising on Tuesday following reports that Russia’s energy minister had met the country’s petroleum producers to discuss deeper production cuts in the second half of the year.

Brent crude, the international benchmark, fell 1.5 per cent to $35.63 a barrel, while West Texas Intermediate, the US marker, dropped 1 per cent to $34.01. The yield on the US 10-year Treasury bond slipped 0.008 percentage point to 0.69 per cent, signalling a slight rise in price.