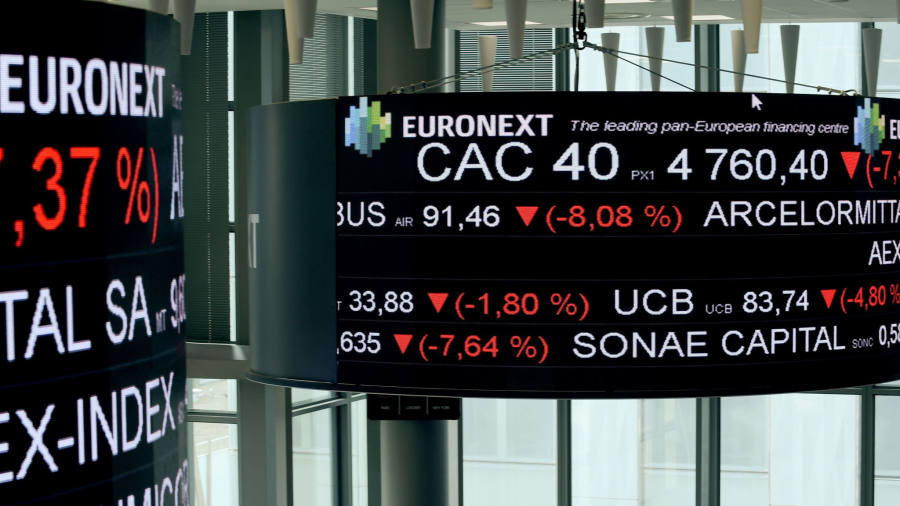 Four European countries have applied temporary bans on betting against the prices of a range of shares in an attempt to calm the region’s rocky markets.

France, Italy, Spain and Belgium said overnight that they would move to stop the short selling of hundreds of stocks listed on their markets. European markets staged a brief rebound in early morning trade in Europe, before giving up the gains by lunch time.

The practice of short selling is where investors borrow shares and then sell them, hoping to buy them back later at a lower price before returning them and pocketing the difference. The practice has been blamed for exacerbating volatility during times of stress.

The Autorité des Marchés Financiers, the French regulator, said its ban would cover 92 stocks and last a day. It applies to many of France’s blue-chip stocks such as Air France-KLM, BNP Paribas and Renault, but also many small and mid-cap stocks. Finance minister Bruno Le Maire praised the decision on Tuesday morning and said the ban could be extended, as markets staged a limited recovery.

The minister added: “The French banks are hit on the market but they are very solid. [They] have the necessary capitalisation to be solid.” Shares in lenders BNP Paribas and Société Générale have halved so far this year.

In a statement late on Monday, Spain’s regulator said its ban for all Spanish stocks would last for a month, and the prohibition might be extended if needed.

It cited the extreme volatility in European markets, and the state of emergency that was declared by the Spanish government over the weekend. The ban will extend to derivatives that involve creating a short position.

Consob, the Italian regulator, has restricted short selling on 20 of Italy’s biggest companies for all of Tuesday. Its list consists of mainly banks and insurance companies such as UniCredit and Mediobanca, but also includes Fiat Chrysler and Telecom Italia. The ban on 17 Belgian stocks will also last for one day.

European rules allow national regulators to apply a temporary EU-wide ban if there are falls of more than 10 per cent for the most actively traded shares, or 20 per cent or more for less liquid shares. UK authorities are required to apply the ban to London trading venues while the country is in the transition period to leave the economic bloc.

Last week, Spanish and Italian regulators banned investors for one day from betting against the prices of a combined 154 stocks.

A 2018 study by the European Systemic Risk Board of short selling prohibitions in the financial and eurozone crises found that bans on financial institutions resulted in greater volatility and probability of default.