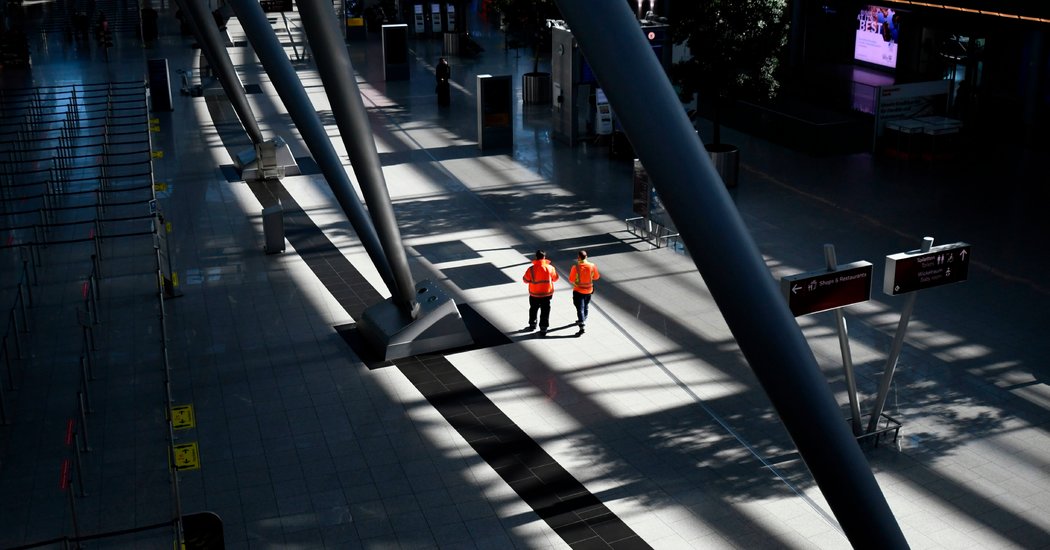 FRANKFURT — As the German airline Lufthansa struggles to stay in business, it’s no surprise that its employees are suffering, too. But as is the case at other struggling companies, some workers are suffering more than others.

They are often the ones who earned the least to begin with.

Faced with collapsing sales, Lufthansa agreed to take full advantage of a government subsidy program that, combined with money from the company, provides furloughed workers with 90 percent of their normal net pay. The subsidy alone would have provided them 60 to 67 percent.

That was nice, except it did not apply to the crews for SunExpress, which is a joint venture between Lufthansa and Turkish Airways and offers budget flights to Mediterranean holiday spots.

SunExpress employees, who already are paid less than Lufthansa workers, will receive a lesser deal while furloughed: 75 percent of their net pay, or 82 percent for those with children.

About 27,000 Lufthansa cabin and ground personnel are covered by the agreement. SunExpress has about 1,200 employees in Germany, giving them far less political influence.

Lufthansa is an example of how corporate cost-cutting in Europe is falling hardest on people at the low end of the pay scale, despite strong unions and strict labor laws.

“The ones who were already weak, who already had worse working conditions, are now the ones that suffer,” said Mira Neumaier, head of the civil aviation team at the German service workers union known as Ver.di.

Airlines, retailers and many other industries are in dire shape after lockdowns that brought much of the global economy to a standstill. They have to drastically cut costs. Lufthansa last week asked for government bailouts after passenger traffic dwindled to almost nothing and it lost more than a billion euros in the first quarter.

Lufthansa’s agreements with workers are intended “to keep as many employees on board as possible,” Jörg Waber, a Lufthansa spokesman, said in an emailed statement.

But Ms. Neumaier said the savings to the airline from treating some employees worse than others is out of proportion to the burden on individual workers. A SunExpress flight attendant typically earns less than 2,000 euros (or $2,200) a month before taxes, according to worker representatives.

For some employees, she said, “it will really make a difference whether they can pay their rent or not.”

At some companies, cost-cutting means targeting the workers who can be fired with the least fuss, or who have the least clout in the labor market.

WrenKitchens, which describes itself as Britain’s largest kitchen retailer, fired hundreds of employees in March, including many trainees and recent hires, saying their performance was not up to par. Had WrenKitchens furloughed the workers instead of firing them, the British government would have covered 80 percent of their pay.

“It’s a family business, they should understand that they’re putting a lot of families in difficult situations,” said Leo Ismail, 28, a trainee who lost his job. Mr. Ismail, who has a 17-month-old son, said he had enough savings to last a month.

“That this happened when the government has guaranteed the wages of furloughed workers makes Wren’s behavior particularly cruel,” Mike Wilkinson, a union official, said in a statement.

Reports are increasing that say some employers are abusing subsidized furlough programs, pocketing the government money while continuing to pressure employees to work.

In France, over 900,000 firms have put eight million employees on “partial unemployment,” a government program like the ones in Germany and Britain designed to make sure people have incomes while their companies are shuttered.

The French government reimburses employers 80 percent of their workers’ net salaries on the condition that the employees don’t telecommute or perform other work full time. Many employers cover a portion of the remaining lost wages.

But some French employees say they are being required to report to work even though their employer is collecting the subsidy.

“We have cases where salespeople, gardeners and retail employees are being told to work” when their company has enrolled in the subsidy program, said Elie Lambert, the national secretary of the National Solidarity Union, a trade union representing workers in all sectors of the economy.

“Or they’re told, ‘If you don’t want the company to die, you’ll work anyway,’” said Ms. Lambert, whose group has collected hundreds of complaints on a nationwide hotline in recent weeks.

The reports have grown so numerous that the French Labor Ministry has threatened steep fines and jail time for employers fraudulently abusing the system.

Freelancers and temp workers are particularly vulnerable when companies go looking for places to save.

IBM’s Dutch unit told freelancers and contractors that they would have to accept a 25 percent cut in their compensation or be fired, RTL Z, a Dutch business channel, reported. IBM said in a statement that, in the interests of employing as many people as possible, “we are taking various actions involving some of our contractor work force.”

In Germany, supermarkets have hired temporary security guards to limit the number of shoppers who are inside at any given time, in line with lockdown requirements. The Ver.di union has complained that these workers are being underpaid in violation of wage agreements.

An association that represents security firms has told its members that the supermarket guards are entitled only to the German minimum wage of 9.35€ an hour, rather than the wage negotiated with unions, according to Ver.di.

The union wage is not that much higher, ranging from 10.60€ an hour in some eastern German states to 11€ in parts of western Germany.

Security firms argue that people controlling traffic at supermarkets are more akin to ushers at a sports event than security guards, and therefore not entitled to as much pay. Silke Zöller, a spokeswoman for the industry association that supplies and pays security guards, said that the minimum wage would apply only to a narrow subset of workers not covered by wage agreements.

Some of these inequalities will disappear when lockdowns ease, as is already happening in Germany and other places. But some of the damage is permanent.

Lufthansa initially agreed to pay 1,100 furloughed employees of Germanwings, another budget subsidiary, 90 percent of their pay — the same amount as workers at the parent company. But then Lufthansa decided to fold the unit, which has long had financial trouble. That means the employees are no longer eligible for the pay they would have received on furlough and must apply for unemployment benefits, which are usually lower.

Lufthansa said it hoped to find jobs for Germanwings employees elsewhere in the company.

At the same time, Lufthansa has also asked for government aid, warning that its existence is at stake and hinting that it may not be able to pay any furloughed employees more than they get from the government. Worker representatives said they planned to push political leaders to make any support conditional on better treatment of employees of the airline’s subsidiaries.

“On the one side they ask for help for the state, and on the other side they refuse to top up salaries,” said Daniel Flohr, a Lufthansa flight attendant who is also chairman of the Independent Organization of Flight Attendants, known in German as U.F.O. “That’s unacceptable.”