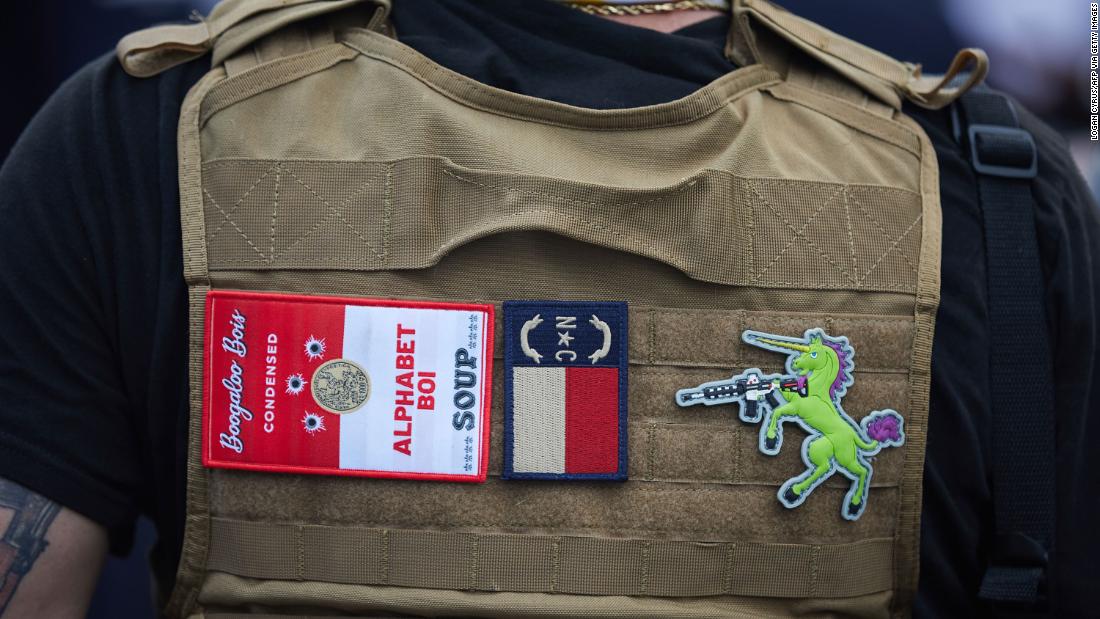 The banned content includes a core set of 220 Facebook accounts, 95 accounts on Facebook-owned Instagram and dozens of pages and groups that Facebook, in a blog post, said posed a “credible threat” to public safety. Facebook said the accounts were “actively promoting violence against civilians, law enforcement, and government officials and institutions.”

That network of Facebook users, the company said, was engaged in recruiting followers from the wider Boogaloo movement for clearly violent purposes.

In a separate move, Facebook issued another batch of bans Tuesday targeting more than 400 groups and 100 pages that hosted “similar content” praising or supporting the movement but that Facebook said were not primarily operated by members of the first network and did not appear to promote as much violence.

The crackdowns mark Facebook’s latest attempt to confront hate speech and extremism on its platforms amid weeks of criticism over its content moderation policies. The backlash has led to a growing advertiser boycott involving some of the world’s largest companies, including Coca-Cola, Starbucks (SBUX) and Ford (F). It comes a day after Reddit, Twitch and YouTube took actions of their own against a variety of content on their platforms that they said was hateful.
It also highlights the rise of an amorphous movement that law enforcement officials, including Attorney General William Barr, have identified as wanting “to bring about a civil war.” The movement is difficult to categorize due to the diverse nature of its members’ social and political beliefs, which range from self-identified left-wing members of the LGBT community to, in some cases, supporters of white supremacy.
Facebook said its investigation into the problematic content began after apparent Boogaloo supporters appeared at a gun rights rally in Richmond, Va., in January, indicating a link between some of the movement’s online organizing and real-world, offline actions. It also comes after violent attacks allegedly tied to the Boogaloo movement and the indictment of three men who allegedly conspired to disrupt protests in Las Vegas by targeting police and government buildings.

“Officials have identified violent adherents to the movement as those responsible for several attacks over the past few months,” Facebook said in the blog post. “These acts of real-world violence and our investigations into them are what led us to identify and designate this distinct network.”

The crackdown was announced hours after Sen. Mark Warner, a top critic of the tech industry in Washington, wrote a letter to Facebook CEO Mark Zuckerberg expressing concerns about the spread of extremist content on the platform, saying he feared Facebook may be “unable (or unwilling) to enforce its own Community Standards.”

“The prevalence of white supremacist and other extremist content on Facebook — and the ways in which these groups have been able to use the platform as organizing infrastructure — is unacceptable,” Warner wrote in the letter, citing reports on the Boogaloo movement as a source of his concern.

In the announcement, Facebook drew careful distinctions between the Boogaloo movement more generally and the specific accounts and pages it said were advocating violence.

The banned accounts shared many similarities with the overall movement, Facebook said, drawing on similar language and iconography. But, Facebook officials told reporters on a conference call, the platform’s enforcement on Tuesday is directed at users who sought to co-opt the movement’s symbols — such as igloos and Hawaiian shirts — to promote violence, and that non-violent Boogaloo content may still be referenced on Facebook. The officials spoke on condition of anonymity, citing possible concerns for their safety if they were to be publicly named in connection with the content crackdown.

The Anti-Defamation League, which has been tracking the Boogaloo movement, has said the name of the collective is a reference to the 1984 film “Breakin’ 2: Electric Boogaloo.” Some of the movement’s adherents have suggested, perhaps jokingly, of a second US civil war, according to the ADL.

Various adaptations of the name have also become part of the fabric of the movement. The ADL has highlighted the word “igloo,” for example, as a term now associated with the movement.

Facebook told reporters on the call that it expects further adaptations and evolutions of the movement as members seek to evade the company’s enforcement efforts.

This is not the first time Facebook has removed Boogaloo-related content. Earlier this month, the company told CNN that it had banned the term “Boogaloo” and over 50 other variations of the phrase when they appear together with images or statements depicting armed violence.

Facebook said Tuesday it has already removed more than 800 posts related to Boogaloo under its policy against violence and incitement in the past two months.