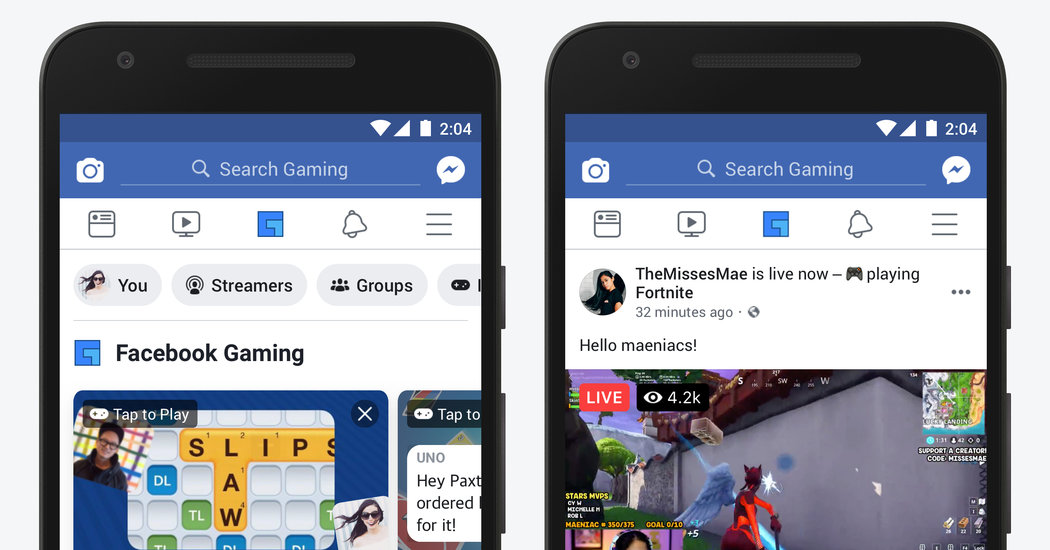 Facebook plans to introduce the Facebook Gaming mobile app on Monday, the social network said, in its most decisive move into the video game business as people seek entertainment during the pandemic.

The free app caps several years of investment at Facebook, which said more than 700 million of its 2.5 billion monthly users already engaged with gaming content. The app is designed largely for creating and watching live gameplay, a fast-growing online sector where Facebook is battling Amazon’s Twitch, Google’s YouTube and Microsoft’s Mixer services.

With much of the world urged or ordered to stay home during the coronavirus outbreak, the $160 billion global games business is booming. Facebook originally intended to release the app in June but accelerated its plans as the quarantine’s scope became clear.

“Investing in gaming in general has become a priority for us because we see gaming as a form of entertainment that really connects people,” said Fidji Simo, head of the Facebook app, who reports to the Silicon Valley company’s chief executive, Mark Zuckerberg. “It’s entertainment that’s not just a form of passive consumption but entertainment that is interactive and brings people together.”

Ms. Simo said the pandemic had prodded the company to speed up other gaming projects, too, including a new tournament feature. “We’re seeing a big rise in gaming during quarantine,” she said.

The company tested the Facebook Gaming app in Southeast Asia and Latin America over the last 18 months and plans to release it on the Google Play store for Android devices. Versions for iOS will be released once Apple approves them, Facebook said.

Although Facebook was a top gaming platform a decade ago during the FarmVille era, the company hasn’t been a dominant force in recent years. In the game streaming market, Facebook is No. 3 in total hours watched, behind YouTube and Twitch, according to Streamlabs. Viewers currently watch Facebook game streaming with the core Facebook app and on the new app in the developing markets where it’s already available.

The new app includes casual games and access to gaming communities, but its fate will depend largely on how successfully it entices people to watch and create live game streams. A function called Go Live lets users upload streams of other mobile games on the same device by pressing just a few buttons.

Those streams can then be shared to someone’s personal Facebook page, potentially making it much easier for people to become amateur streamers.

“There are a lot of people who listen to music and say, ‘I can imagine myself being a musician,’” said Vivek Sharma, Facebook’s vice president for gaming. “People are watching streams and they’re like, ‘I want to be a streamer,’ and with Go Live it’s literally just a few clicks and then live, you’re a streamer.”

The app has no advertising within it, for now. Facebook will make money when viewers send “stars,” representing sums of money, to streamers, effectively taking a commission. The company said it wanted to build its gaming audience before adding other ways to make money.

Facebook is focused on mobile and the new app for streaming because the mobile experience is more intense than computer viewing, Mr. Sharma said. Twitch is dominated by desktop PC gaming.

“We don’t want to be the background window in a Chrome tab while someone is doing their homework or doing something else,” Mr. Sharma said. “With mobile, if you have the app open and you’re using the app, it’s in the foreground. You can’t do anything else on your mobile phone, and that is extremely powerful.”