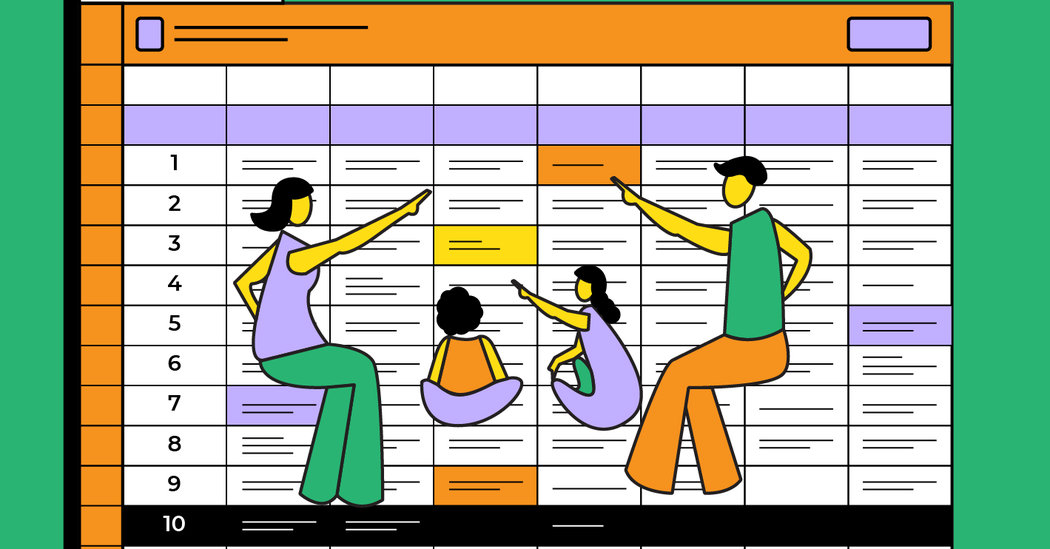 Michelle Penczak and her husband, Maj. Sean Penczak, had planned, pre-coronavirus, to move from Kailua, Hawaii, to Atlanta for Major Penczak’s new job with SkyWest airlines in May. A cross-country relocation isn’t easy under normal circumstances, especially with two boys, ages 1 and 4. Then the pandemic arrived.

Major Penczak was furloughed, and the couple, both 33, scrambled for a new destination. They landed on Virginia Beach, Va., close to Major Penczak’s Marine Corps reserve unit. But this required choosing a new neighborhood, house and schools. It meant rethinking the family’s entire budget: Could they afford full-time day care? Keep their Netflix subscription?

And what about the move itself? What personal protective equipment (P.P.E.) would they need? Which stroller would best contain the boys, so they didn’t touch anything? At what intervals would they all wash their hands?

To impose order on this chaos, the family turned to Airtable, a cloud collaboration platform that companies use to manage big projects. In went every new budget line item, every piece of P.P.E., every potential day care provider.

It was part of a strategy the family implemented a year ago: Apply office management tools to structure their domestic life. This included weekly meetings called “Sunday huddles,” midweek check-ins called “brain dumps” and organizational platforms like Airtable as well as Trello, a Kanban-style list-making app that resembles a board of Post-it notes.

Ms. Penczak runs Squared Away, a company that trains military spouses to be chief executive assistants. “My job is organizing people for a living,” she said. “And my philosophy is that if you do it more than once, it should have a process.”

But for many years, the couple made their domestic decisions “in passing,” which strained their relationship. Once they gave their marriage an H.R.-style audit, however, the situation improved. And now with coronavirus, Ms. Penczak is especially grateful to be running her household like her business.

“Focusing on the things we can control over those we can’t has been huge,” she said. “I thrive on organization, and this has given me peace of mind.”

Not every couple is Type A enough to meld the family room with the conference room, but those who do have found some solace at this uncertain moment. Meghan Asha, 39, and Lev Brie, 38, have been leaning heavily on “My Relationship Is a Start Up” — MRS for short — an organizational system they created to guide their marriage.

“Running your business is the same thing as having a family and kids,” Ms. Asha said. “What’s our mission as a family? How do we organize ourselves? How do we create trust, transparency and communication when the going gets tough?”

A few weeks into their isolation in Niantic, Conn., the couple learned that Ms. Asha was pregnant with their first child. Like so many people, their lives were already in upheaval. Ms. Asha is the C.E.O. of FounderMade, a company that hosts retail conferences for consumer brands.

She had been forced to lay off half her staff and switch to digital events and mailings to avoid shutting down. Mr. Brie, a founder of River, a news-search technology platform, was working overtime to manage his team of 11 remotely.

“We said we wanted a baby this year no matter what, but we didn’t think there’d be an apocalyptic event,” he said.

To make it through, they turned to Clickup, a workplace productivity app with which they track their annual, quarterly and weekly relationship goals. Their tool of choice is a “weekly sprint”: a type of organizational checklist that originated in software development.

During normal times, topics may include trying to schedule more regular date nights or questions about future parenting tactics. Now, they’ve added a Pandemic Plan, which examines big-picture issues (where’s the safest place to live when the baby is born?) and immediate concerns (how can Mr. Brie help Ms. Asha alleviate her stress?). They discuss these issues at regular MRS debriefs, which also include written constructive feedback.

“MRS lets us be business ready for hard conversations,” Ms. Asha said. “Before, the hot topics — basic things like you didn’t do the dishes, or deep stuff like you’ve been ignoring me — would have hit us and made us fight. We have that space now to think things through and be intentional about how we treat each other.”

Of course, for these strategies to work, both people need to be game. Initially, Major Penczak required some convincing. “He was not quite anticipating the level of tool usage that he would become adjusted to,” Ms. Penczak said. But he got on board. “We don’t have the ‘Oh, I don’t remember you saying that’ conversation. That’s amazing after seven years of marriage.”

Allison Daminger, a sociologist and doctoral candidate studying the impact of societal inequality on family dynamics at Harvard, agrees that these formal systems “can be annoying or cumbersome.” But she said they’re useful in achieving domestic parity.

Last year, she published a study in the American Sociological Review about cognitive labor: the process of anticipating, planning and monitoring that is often required in household tasks. Without an “explicit plan, when couples just fell into the division of labor, they almost always replicated the status quo with women doing more,” she said. “The more formal systems help couples reckon with what they actually want.”

Hitha Palepu, the C.E.O. of a pharmaceutical start up, angel investor and mother of two, said “a lot of women can empathize with constantly giving and giving and giving and waiting for someone to say, ‘Let me jump in.’ Unfortunately, that doesn’t happen often.”

Ms. Palepu, 35, had a breaking point in late 2018, while pregnant with her second child. She was suffering from depression, and her work and family responsibilities felt unmanageable. When friends posted a marriage check-in list on their Instagram, Ms. Palepu asked her husband to give it a try.

Now each week, “we go through almost all the agenda items: how are you feeling, how am I feeling, how does our marriage feel,” Ms. Palepu said. “If one of us is feeling off, underappreciated or not heard, we discuss what we can do to remedy that.” This level of honesty and vulnerability took some getting used to. “The first few meetings were incredibly uncomfortable,” she said. “You have to put your ego aside. It’s a practice.”

A year later, the couple adopted a family management system they’d read about in a 2019 book called “Fair Play: A Game-Changing Solution for When You Have Too Much to Do (and More Life to Live).” Ms. Palepu even brought the dog-eared, highlighted copy with her when the family left Manhattan to isolate with her parents in Bucks County, Penn.

“I sat my parents down and said we need to talk about what everyone is going to do, so we can all live harmoniously in the same house,” she said.

You should “treat your home like your most important organization” said Eve Rodsky, the author of “Fair Play.” In an efficient, well-functioning office, people know their rolls and have clearly defined expectations. “The home,” she said, “has none of these.”

Ms. Rodsky, 43, runs a philanthropic and family management consulting firm for high-net-worth individuals. But she wrote “Fair Play” for the average stressed out parent. According to her, fairness isn’t about a 50-50 breakdown, but rather, each person truly “owning” a set of domestic responsibilities. Whether it’s your job to wash the dishes or balance the household budget, you’re responsible for all the related logistical and cognitive labor: what Ms. Rodsky calls conception, planning and execution, or “CPE.”

Before writing “Fair Play,” Ms. Rodsky said her husband was in charge of extracurricular sports. To him, this meant showing up for Little League games. But Ms. Rodsky was actually doing most of the CPE: submitting medical forms, picking up the uniforms, ordering cleats and then returning them when they didn’t fit, remembering to pack the kids’ sunscreen and water bottles, arranging car pools.

Now, under the “Fair Play” ownership model, “I never think about extracurriculars again,” Ms. Rodsky said. “It’s been so freeing. I got six hours of my week back.”

But if you really want to fix domestic inequality, she said, meticulous spreadsheets and fancy apps aren’t the solution. “Asana won’t help you communicate,” she said, referring to another team-management tool. “What’s your feedback mechanism?” (Nagging! Just kidding.)

In Houston, Mor Regev, 35, and Eric Sweeney, 33, learned this the hard way. Their first week in quarantine, the family was overwhelmed. Ms. Regev, a social worker, and Mr. Sweeney, a teacher, were working from home while taking care of their 6-month-old daughter, Jackie.

They’d added a Covid-19 column to their household’s organizational spreadsheet, a tool they’d created after reading “Fair Play.” But their weekly Sunday meetings, where they planned out the week and talked through problems, had dropped off.

“We were really snippy and unkind,” Ms. Regev said. “Things were falling through the cracks.” This came to a head when Mr. Sweeney realized that Ms. Regev was taking work calls during her child care shifts.

“I’m reading to Jackie, interacting with her, trying the whole time,” Mr. Sweeney said. “You need to do the same thing.” Ms. Regev countered that they hadn’t talked though what the “minimum standard of care” or MSC (another “Fair Play” principle) would look like for their daughter in quarantine.

Faced with a potential impasse, they agreed to prioritize Sunday meetings, just like they did their work calls. “There was definitely tension for a few days over what was an acceptable MSC,” Ms. Regev said. “But it could have turned into a much bigger fight if we hadn’t had a system.”