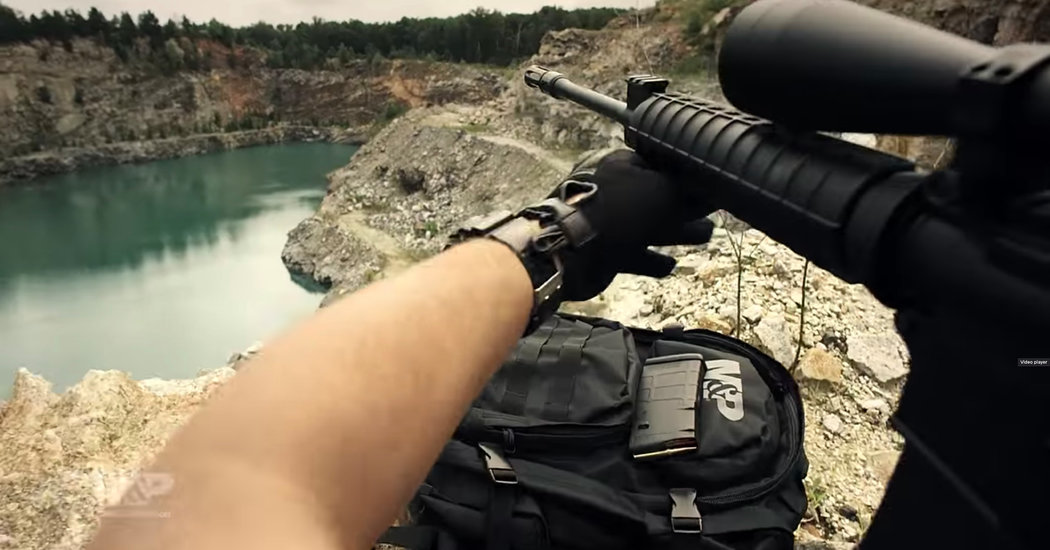 The father of a mass shooting victim and two gun safety groups petitioned the federal government on Sunday to stop the firearms manufacturer Smith & Wesson from using what they described as “deceptive and unfair” marketing to promote assault-style rifles.

The father, Fred Guttenberg, whose 14-year-old daughter, Jaime, died in the Marjory Stoneman Douglas High School massacre in Parkland, Fla., joined with the advocacy groups Brady and Everytown for Gun Safety to send a complaint to the Federal Trade Commission.

As part of the complaint, Mr. Guttenberg and the gun control groups said that Smith & Wesson mimicked first-person-shooter video games in its advertising materials to attract adolescents and young adults. They added that the marketing of the company’s AR-15-style guns “attracts, encourages and facilitates mass shooters” and “played a significant role” in the Parkland shooting, according to the complaint.

Smith & Wesson is the maker of the M&P15 .223 rifle used by the 19-year-old shooter in the 2018 Parkland massacre. The complaint urged the federal agency to investigate the company and to require that it include warnings in some of its marketing materials.

Mr. Guttenberg and the two advocacy groups also argued that the commission should prohibit the M&P brand — which stands for “military and police” — from making use of imagery associated with the military and law enforcement to sell its products to civilians.

Gun safety activists have long taken issue with how firearms are marketed. Relatives of the Sandy Hook Elementary School shooting victims have said in a court case that the Remington Arms Company, which made the Bushmaster AR-15-style rifle used in the 2012 massacre, recklessly marketed the gun to disturbed young men through violent video games and aggressive ads.

The Federal Trade Commission regulates marketing from social media influencers, ads from tobacco companies and, more recently, claims about coronavirus cures and loans. Over the last two decades, the agency has dealt with few cases involving how guns are advertised, according to the gun safety groups.

Mr. Guttenberg said in an interview that he turned to the agency after facing “somewhat insurmountable” hurdles trying to raise his concerns about Smith & Wesson in Florida’s court system.

With a nudge from the commission, he added, elected officials may be moved to take further action.

“Times are different now,” Mr. Guttenberg said. “There are enough elected people in this country willing to address this topic in ways they were afraid to do in years past.”

The 34-page complaint accuses Smith & Wesson of cultivating a “halo” of credibility by running ads that appeared to feature active members of the military carrying firearms resembling M&P rifles. It cites the company’s use of slogans that suggested ties to law enforcement and the military such as “To Uphold. To Protect. To Defend” and “The Line of Duty.”

Most of the rifles are sold to civilians rather than to the military or law enforcement, according to the complaint.

The complaint also faulted Smith & Wesson for marketing to male adolescents and young adults on social media platforms like Instagram, where the company has a million followers, and through ads that evoked video games, with text like “experience more adrenaline” and “experience real-life first person shooting.”

Federal restrictions prohibit licensed gun merchants from selling long guns to anyone younger than 18, according to the Bureau of Alcohol, Tobacco, Firearms and Explosives. But no federal law exists to block unlicensed sellers from doing business with “a person of any age.”

The gun industry has suffered in recent years. When President Trump was elected in 2016 after frequent shows of support for the firearms industry, sales slumped. Gun buyers seemed no longer worried about losing access to firearms, leaving sellers with stockpiles of the guns they had amassed in anticipation of a Hillary Clinton victory.

Demand has lately ticked upward. Some gunmakers have adjusted their marketing to be gentler and more inclusive. In March, as the coronavirus pandemic intensified, Americans bought two million guns, the busiest month ever for sales since January 2013.

Smith & Wesson dates back to the 1850s and is based in Springfield, Mass. In March, its parent company said the number of handguns it shipped to distributors and retailers increased 4.7 percent in its most recent quarter. But shipments of long guns sank 31.8 percent, in part because a series of mass shootings put off several major retailers.