Fears of Ventilator Shortage Unleash a Wave of Innovations 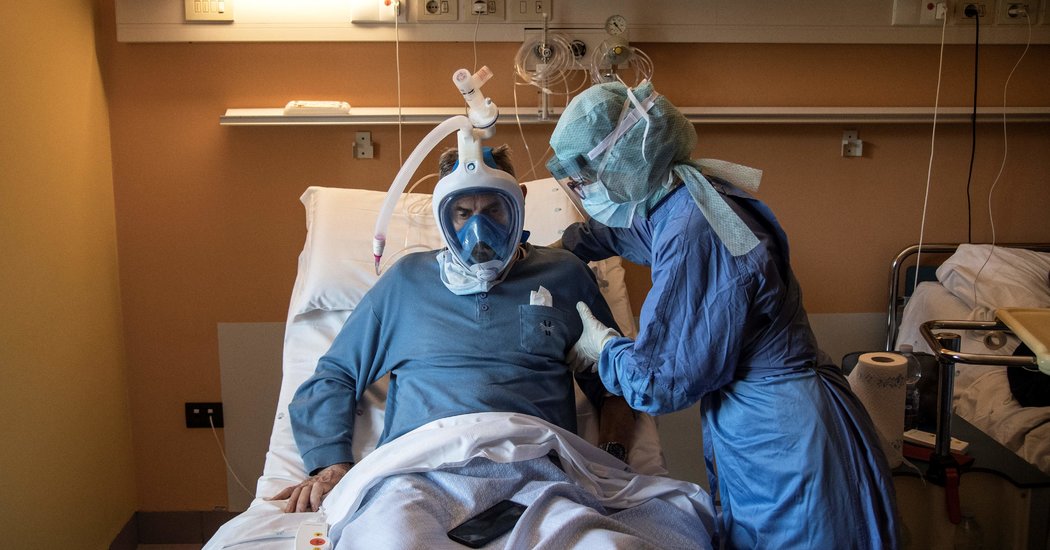 As the coronavirus rages across the globe, ventilators that pump oxygen into the lungs of critically ill patients have been embraced as the best hope for saving lives.

But fears of a ventilator shortage have unleashed a wave of experimentation at hospitals around the country that is leading to some promising alternatives to help sustain patients.

Doctors at North Shore University Hospital on Long Island have been using machines designed for people with sleep apnea to keep scores of coronavirus patients breathing, and engineers at New York University have transformed hooded hair salon dryers into personal negative pressure chambers that deliver oxygen and limit the spread of aerosolized virus, lowering the infection risks for health care workers and other patients.

Pulmonologists across the country have been turning to a remarkably simple intervention: flipping patients onto their stomach, which markedly improves oxygen levels for those in respiratory distress.

Doctors say these and other ad hoc interventions have allowed many hospitals to weather the surge of desperately ill patients in recent weeks, and may have helped stave off the dire ventilator shortages and rationing that some had feared but have not come to pass.

“Some of these are battlefield interventions that we would not normally use in hospitals, but this crisis has been an incredible spur for creativity and collaboration,” said Dr. Greg Martin, a pulmonologist in Atlanta and the president-elect of the Society of Critical Care Medicine. “The beauty of this is that we’re learning a lot and hopefully some of this will translate to things we can use in the future.”

The innovations have also been fueled in part by the dismal survival rates for patients on ventilators; in New York City, 80 percent of ventilated coronavirus patients did not survive.

Doctors have always seen ventilators as a last resort for patients in respiratory distress, but many physicians on the coronavirus front lines are finding that noninvasive interventions can keep patients off the machines and improve outcomes.

The pandemic is also scrambling previously accepted wisdom about acute respiratory distress syndrome, or ARDS, a condition marked by perilously low oxygen levels. The condition, an alarming hallmark of severe Covid-19, occurs when fluid that floods tiny air sacs deep within the lung interferes with the body’s ability to deliver oxygen to vital organs.

But over the past month, many doctors say they have been mystified by Covid-19 patients with low oxygen levels who are still breathing on their own. Some health workers have reported caring for patients with oxygen saturation rates in the 70s and 80s — anything below 93 percent is cause for concern — yet their heart rates and brain function were relatively normal.

“It’s been a very humbling experience dealing with a new illness, where we’re not sure whether the treatments we’re using are beneficial,” said Dr. Anthony S. Lubinsky, medical director of respiratory care at NYU Langone Health. “The data just isn’t there yet, but what we’re realizing is that a ventilator alone is often not enough to save ARDS patients.”

Intubation, which involves inserting a breathing tube into the lungs, carries myriad risks. Patients must be heavily sedated, and many remain tethered to the machine for weeks. They also need to be closely monitored 24 hours a day, a challenge for hospitals grappling with a flood of patients and a shortage of respiratory specialists.

Weaning patients off a ventilator presents its own difficulties because prolonged ventilation can cause severe lung injury, but removing breathing support too early can prove deadly.

Still, many doctors believe that intubation offers the best hope for saving the most seriously ill patients. In recent weeks, as Covid-19 patients inundated hospitals in New York, Dr. Hugh Cassiere, a pulmonologist at Northwell Health, realized that the hundreds of less sophisticated breathing machines known as CPAP and BiPAP devices gathering dust in hospital storage rooms might help doctors weather a ventilator shortfall. The lunchbox-size devices are familiar to the millions of Americans with sleep apnea, chronic obstructive pulmonary disease and other breathing disorders.

Over several days, Dr. Cassiere and his colleagues figured out how to convert the machines into makeshift ventilators, in part by using 3-D-printed adapters to hook the machines up to endotracheal tubes and to add HEPA filters that capture virus emitted during exhalation.

Roughly 100 patients at North Shore University Hospital have been successfully sustained on the machines, and Dr. Cassiere said he has also used them on patients with other illnesses in order to free up critical care ventilators for Covid-19 patients. “I’d rather have more regular ol’ ventilators, but this could be a viable option if a hospital is running low,” he said.

Enthusiasm for the machines has been spreading. Rhode Island health officials on Tuesday announced a campaign asking residents to drop off their unused devices at fire stations across the state.

Many hospitals are using them to increase oxygen levels without resorting to intubation. The devices, doctors say, have been especially helpful for coronavirus patients with moderately impaired lung function. The positive air pressure they pump out dislodges fluid in damaged lungs, allowing the alveoli to better absorb oxygen, respiratory specialists say.

The Mount Sinai Health System in New York is retrofitting 200 breathing machines donated by Tesla. Those devices, manufactured by ResMed and known as VPAP, or variable positive airway pressure, have been reconfigured to trap exhaled contagions. In a pinch, the revamped machines can also serve as air pumps for intubation.

Dr. Charles A. Powell, director of the Mount Sinai-National Jewish Health Respiratory Institute, said the machines were not quite powerful enough to help patients in severe respiratory distress, though they do appear to provide relief for coronavirus patients with moderate breathing problems. He said the hospital has begun a randomized study to see whether the machines that use a simple face mask could be used at home by people not sick enough to be hospitalized.

The downside, he said, is the risk of infecting others in the household because the masks do not filter out exhaled virus. “If possible, a person who is not sick should stay out of the room while the CPAP machine is working,” he said.

Some doctors remain wary of the alternative devices. Dr. Wilcox of Mass General cited a 2017 study that found that up to 80 percent of patients with moderate respiratory distress who were attached to CPAP machines damaged their lungs by taking huge breaths over an extended period of time. The risk was especially pronounced in younger patients. Dr. Wilcox said she prefers to give coronavirus patients oxygen through a tube fitted beneath the nostrils.

“There is probably a subset of patients who could benefit from CPAP machines, but the challenge is how to quickly determine who they are,” she said.

Dr. Wilcox has also been encouraged by prone positioning, an intervention that involves turning patients in respiratory distress onto their stomachs. The practice, long used to increase oxygenation for mechanically ventilated patients, has been surprisingly beneficial for Covid-19 patients who are not intubated. The maneuver works by opening parts of the lungs that are compressed while lying on the back.

“It’s all anecdotal at this point, but patients tell us they feel better,” Dr. Wilcox said. “It’s just fascinating.”

Another intriguing alternative is a positive pressure hood that fits over a patient’s head to prevent the spread of pathogens while pushing air into the lungs. The hoods, which resemble something out of “2001: A Space Odyssey,” have been widely used by doctors in Italy and China in their battle against Covid-19.

Over the past month, engineers and doctors in the United States have been rushing ahead with designs for similar devices, though they have not yet been approved by the F.D.A. The hoods can be hooked up to a CPAP machine or the central oxygen lines common in most American hospitals.

As she tended to coronavirus patients last Tuesday at the University of Chicago Medical Center, Dr. Bhakti Patel noticed a man in his 50s struggling to breathe. His oxygen level had fallen to 85 percent and he was taking 30 breaths a minute; eight to 10 breaths a minute is considered normal. “You just can’t sustain that,” said Dr. Patel, a pulmonologist.

Not long after placing a hood over his head, the patient’s oxygen level hit 100 percent, she said.

For the past few weeks, a dozen patients who were on the verge of needing intubation have been using the ventilated helmets, and the early results have been promising. One patient has been discharged, another has left the I.C.U. and another two are expected to leave the I.C.U. this week. Only one patient who tried the helmet had to be intubated.

“I am cautiously optimistic,” said Dr. Patel, a co-author of a 2016 study that found the helmets helped avoid intubation in 80 percent of ARDS patients and significantly reduced mortality.

Over the past week, hospitals across the country have also begun experimenting with the helmets. At one, in Oakland, Calif., nurses have been assembling the helmets from parts they ordered on the internet.

Dr. Giacomo Bellani, a critical care doctor at San Gerardo Hospital and University of Milan Bicocca in Italy who has studied the use of the helmets in ARDS patients, is also a longtime booster. He said they were widely adapted in the 1980s by Italian doctors grappling with the country’s chronic shortage in I.C.U. beds.

The hoods have been a crucial stopgap measure for hospitals in northern Italy swamped by coronavirus patients struggling to breathe. Still, Dr. Bellani said they were not a panacea for the most desperately ill.

“The hoods can buy you time when you’re short on I.C.U. beds,” he said. “But there is a drawback because in some patients you are just postponing intubation and the longer the delay, the greater the risk that some patients won’t make it.”