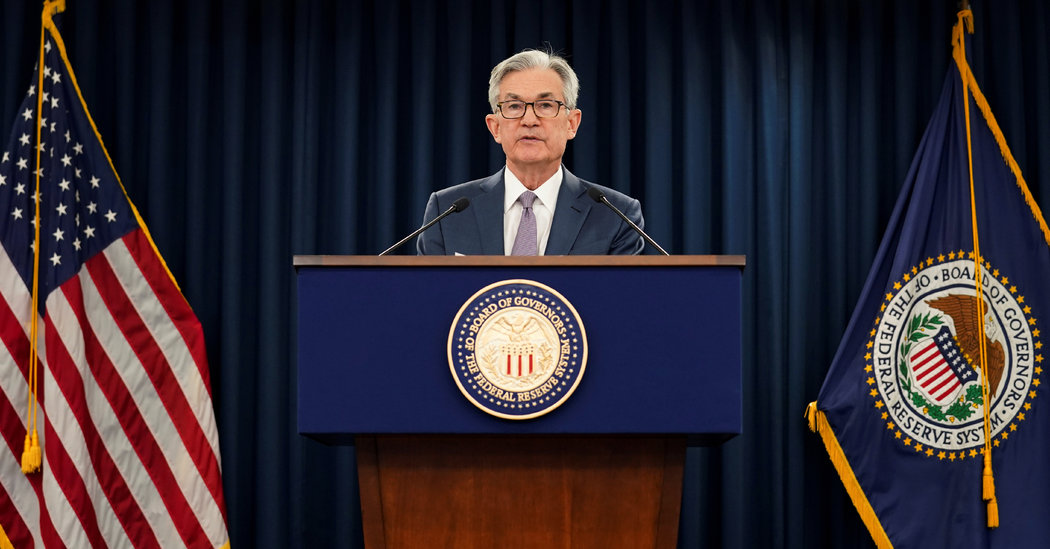 Federal Reserve Chair Jerome H. Powell said an even stronger fiscal policy response might be needed to restore economic prosperity as a downturn “without modern precedent” strikes the United States — one that brings the threat of long-lasting damage.

“The recovery may take some time to gather momentum, and the passage of time can turn liquidity problems into solvency problems,” Mr. Powell said, according to prepared remarks set for delivery at a Peterson Institute for International Economics virtual event. “Additional fiscal support could be costly, but worth it if it helps avoid long-term economic damage and leaves us with a stronger recovery.”

But Mr. Powell reiterated on Wednesday that the Fed’s programs, which will buy bonds from companies and local governments and make loans to midsize businesses, can only temporarily supply credit to ruptured markets. The Fed does not have the ability to make grants, which may be what companies and households need to make it through.

He characterized the Fed’s ability to help as a “bridge across temporary interruptions to liquidity.” But he suggested that more than a bridge may be needed as huge uncertainties continue to confront the economy, from the speed of reopening to the scope of testing and timing of a vaccine.

“While the economic response has been both timely and appropriately large, it may not be the final chapter, given that the path ahead is both highly uncertain and subject to significant downside risks,” he said. “Since the answers are currently unknowable, policies will need to be ready to address a range of possible outcomes.”

Coronavirus lockdowns have left more than 20 million people out of work, disproportionately hitting service sector workers, many of them low-income and without savings.

“The scope and speed of this downturn are without modern precedent, significantly worse than any recession since World War II,” Mr. Powell said Wednesday, noting that “the job gains of the past decade have been erased.”

He pointed out that the burden often falls on the most disadvantaged, explaining that a Fed survey set for release on Thursday will show that almost 40 percent of people who were working in February and were members of households making less than $40,000 a year had lost their job in March.

Mr. Powell warned of significant drawbacks that could come if the current recession is drawn out, from “lasting damage” to the economy’s productive capacity to “avoidable” household and business insolvencies that weigh on growth for years to come. He also cautioned that long stretches of unemployment could erode worker skills and leave families struggling with huge debt loads.

“We ought to do what we can to avoid these outcomes, and that may require additional policy measures,” Mr. Powell said.

Mr. Powell’s comments come as Congress begins to hash out the future of the government’s coronavirus response. House Democrats on Tuesday unveiled a $3 trillion relief measure, which included aid for struggling states and another round of direct payments to Americans. Republicans dismissed the package as an exorbitantly priced and overreaching.

One of the main programs to help businesses get through the lockdowns, the Paycheck Protection Program, has nearly exhausted its $660 billion in funds and many companies are now beginning to worry that the 8-week loans will not be enough to get them through as the virus persists.

Mr. Powell, whom President Trump appointed, has long warned that the government needs to get its spending under control, but has recently said that now is not the time to worry about the deficit.

“This is the time to use the great fiscal power of the United States to do what we can to support the economy and try to get through this,” he said at his April 29 news conference.