Fed Is Wary About the Post-Pandemic Economy, April Minutes Show 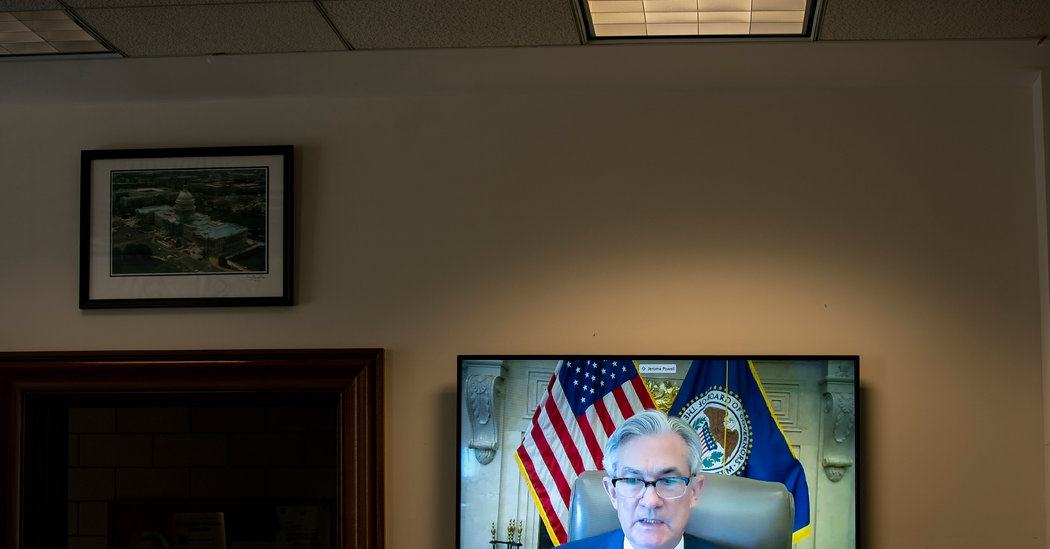 Central bank officials met remotely April 28 and 29, and notes from the gathering were released Wednesday. Jerome H. Powell, the Fed chair, struck a cautionary tone while speaking at a virtual news conference after that meeting, warning that recovery could take time but pledging that monetary policymakers will do what they can to cushion the blow and get the labor market back on track.

“We were hearing from low- and moderate-income and minority communities that this was the best labor market they’d seen in their lifetime,” Mr. Powell said at the news conference. “It is heartbreaking, frankly, to see that all threatened now. All the more need for our urgent response, and also that of Congress.”

The minutes showed that Mr. Powell’s colleagues shared his concern over the economy’s future. In their post-meeting statement, Fed officials said the pandemic posed “considerable risks to the economic outlook.”

“Participants expressed concern that the possibility of secondary outbreaks of the virus may cause businesses for some time to be reluctant to engage in new projects, rehire workers, or make new capital expenditures,” according to the minutes.

Officials at the meeting also worried that foreign economies, particularly emerging markets, “could come under extreme pressure as a result of the pandemic and that this strain could spill over to and hamper U.S. economic activity.”

They also voiced concern that the labor market might see longer-run damage if the crisis lingers and workers lose skills amid heightened unemployment.

Mr. Powell reiterated those concerns during a Senate Banking Committee hearing on Tuesday, warning that the economy was not likely to quickly rebound even once states began reopening and that households and businesses might need more support to get through the downturn.

The unemployment rate, which was hovering near a 50-year low of 3.5 percent before states began to enforce lockdowns meant to contain the coronavirus back, jumped to 14.7 percent in April as more than 20 million people lost their jobs. While many of those job losses are temporary furloughs, they could become permanent if businesses fail to make it through.

The Congressional Budget Office expects that the jobless rate will still be above 8 percent at the end of 2021, based on economic forecasts released yesterday.

The minutes suggested that Fed officials were also worried about financial stability if the pandemic dragged on.

“Participants were concerned that banks could come under greater stress, particularly if adverse scenarios for the spread of the pandemic and economic activity were realized,” the minutes said. They “saw risks to banks and some other financial institutions as exacerbated by high levels of indebtedness among nonfinancial corporations that prevailed before the pandemic.”

The Fed’s next scheduled meeting is June 9 and 10.