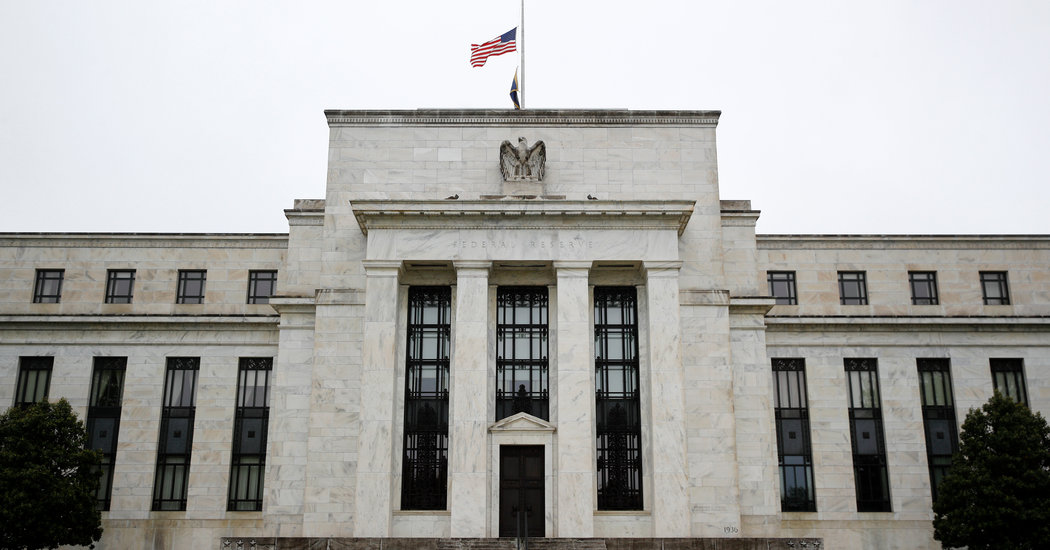 WASHINGTON — The head of the Federal Reserve on Wednesday offered a grim assessment of how quickly the U.S. economy will recover from its pandemic-induced recession, suggesting that millions of people could remain out of work for an extended period as central bank officials estimated unemployment will be at 9.3 percent by the end of 2020.

The Fed chair, Jerome H. Powell, said the labor market might have “hit bottom” after recording a 14.7 percent unemployment rate in April, but made clear that it was too soon to know for certain.

“This is the biggest economic shock, in the U.S. and the world, really, in living memory,” Mr. Powell said at a news conference after the Fed’s two-day policy meeting, during which it left rates unchanged. “We went from the lowest level of unemployment in 50 years to the highest level in close to 90 years, and we did it in two months.”

The sober projections, the Fed’s first estimates of 2020, depicted a very different economic path from the quick “V-shaped recovery” that President Trump has suggested is underway as he pushes states to reopen and remove the stay-at-home orders that have contributed to bringing business activity to a halt.

Mr. Trump has pointed to the stock market rally and the May jobs report, in which the unemployment rate fell to 13.3 percent, as evidence that the economy is “back.”

“I think you’re going to have a V. I think it’s going to be terrific,” Mr. Trump said last month, referring to kind of economic rebound that can occur after a sharp decline. He has continually called for states to reopen, suggesting that officials who do not lift quarantines are artificially holding back the recovery.

But Mr. Powell did not suggest a rapid return to the type of economic growth and low joblessness that defined the 11-year expansion, even as states allow restaurants, offices and salons to reopen. Instead, he said, “there is great uncertainty” about the future given unknowns about the coronavirus and whether people will feel comfortable resuming their previous day-to-day activities absent a vaccine.

“My assumption is that there will be a significant chunk, well into the millions,” Mr. Powell said, referring to workers “who don’t get to go back to their old job, and, in fact, there may not be a job in that industry for them for some time.”

The Fed will do “whatever we can, and for as long as it takes,” to support the recovery, he said, including buying large quantities of bonds and leaving interest rates near zero for a long time. His central bank colleagues projected no increase to borrowing costs through at least 2022, and Mr. Powell said the Fed was “not even thinking about thinking about raising rates.”

Even Mr. Trump’s Treasury secretary, Steven Mnuchin, suggested on Wednesday that a rebound was not likely to be fast or even, particularly for hard-hit industries such as travel, leisure and hospitality.

Mr. Mnuchin, at a hearing before the Senate’s small-business committee, said that some parts of the economy had sustained “significant damage” and that policymakers should spend the next 30 days developing a targeted approach to providing financial relief for struggling sectors.

“I definitely think we are going to need another bipartisan legislation to put more money into the economy,” Mr. Mnuchin said.

Fed officials indicated Wednesday that they expected the unemployment rate to remain elevated for years, coming in at 5.5 percent in 2022. Unemployment stood at a half-century low of 3.5 percent as recently as February, but rocketed to 14.7 percent in April before easing to 13.3 percent in May.

They left rates unchanged and suggested that rates would remain near zero for the foreseeable future in their first set of economic forecasts of 2020, which painted a sober picture of the path back to prosperity.

While Mr. Powell spoke hopefully about the May jobs report, which showed an earlier-than-expected start to rehiring, he said it was also “clear evidence of just how uncertain things are, and how humble we need to be about our ability to have confident predictions.”

“The projections highlight what a long slog the recovery will be,” Steven Friedman, senior macroeconomist at the investment management company MacKay Shields, said in a post-meeting note.

Fed policymaker projections — which offer a range of individual forecasts, rather than an agreed-upon consensus view — also showed a sharp overall economic hit in 2020.

Output is expected to contract by 6.5 percent at the end of this year, compared with the final quarter of 2019, before rebounding by 5 percent in 2021. The Fed had skipped its quarterly economic summary in March as the pandemic gripped the United States, sowing uncertainty as business activity came to a near standstill.

The central bank’s projections followed a series of pessimistic economic prognostications. Earlier on Wednesday, the Organization for Economic Cooperation and Development warned that the world economy faced the most severe downturn in a century and could experience a halting rebound.

“Extraordinary policies will be needed to walk the tightrope towards recovery,” said Laurence Boone, the organization’s chief economist. The group said the world economy will contract by 6 percent this year, if the virus is contained, but could shrink 7.6 percent amid a second wave of contagion. In the United States, it projected a 7.3 percent hit if the virus is contained and an 8.5 percent contraction if it isn’t.

The Fed has taken far-reaching steps this year to support the U.S. economy. Officials cut interest rates to near zero in back-to-back meetings in March. The central bank has been snapping up government-backed bonds to keep markets functioning normally, and has rolled out a series of emergency credit programs aimed at ensuring that businesses and state and local governments can borrow money.

In addition to keeping borrowing costs low, the Fed pledged on Wednesday to continue buying government-backed debt “at least at the current pace” to sustain smooth market functioning, though it will “closely monitor developments” and is prepared to adjust those plans “as appropriate.”

Mr. Powell has emerged as a voice of economic wariness since the pandemic took hold. He has warned that both monetary and fiscal policy must stand ready to do more to make sure the pandemic does not permanently scar the economy, and he has been clear that the Fed does not mistake its early successes in calming markets and reinvigorating lending as giving an all-clear signal.

The Fed chair reiterated on Wednesday that the extent of the downturn and pace of the recovery remained “extraordinarily uncertain.” The severity will depend on policy actions taken at “all levels of government,” Mr. Powell said.

“Somewhere short of 25 million people have been displaced,” he said. “What we’re trying to do is create an environment in which they have the best chance either to go back to their old job or to get a new job. That’s kind of the most important part of this exercise.”

While Congress’s efforts have been “large, forceful and very quick,” Mr. Powell said, questions remain over whether the policy response so far will be enough to prevent longer-run damage to the economy.