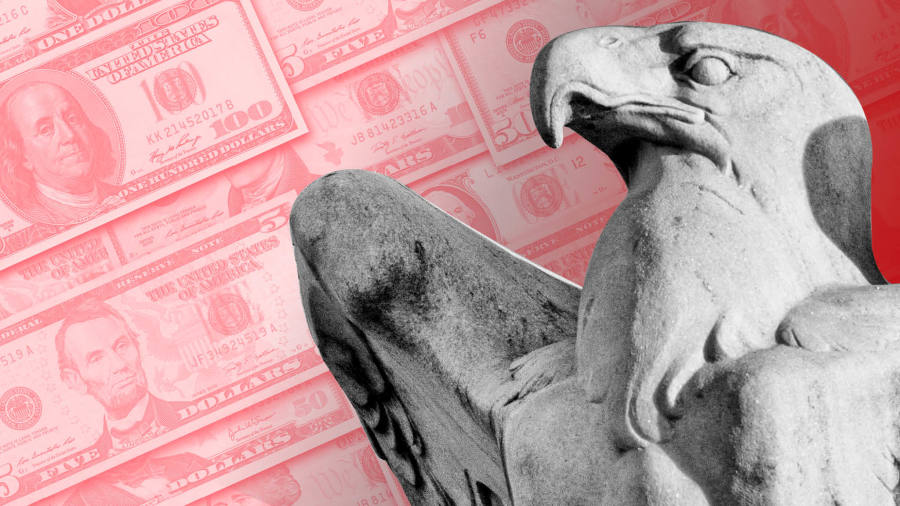 Global stocks fell on Monday despite the US Federal Reserve unleashing its full firepower to support the economy through the coronavirus outbreak when it pledged to buy government bonds in unlimited amounts.

The new measures, which include a historic step to buy corporate debt, add monetary heft to the effort to save the US economy, which is expected to contract sharply in coming weeks.

The Fed’s action came as senior Trump administration officials and congressional leaders clashed over a $2tn package of fiscal stimulus. There were more disagreements on Monday after friction between Democrats and Republicans had held up a deal over the weekend.

“The Federal Reserve is committed to using its full range of tools to support households, businesses, and the US economy overall in this challenging time,” the Fed said in a statement.

“While great uncertainty remains, it has become clear that our economy will face severe disruptions. Aggressive efforts must be taken across the public and private sectors to limit the losses to jobs and incomes and to promote a swift recovery once the disruptions abate,” it said.

In an unprecedented move for the central bank, the Fed unveiled two new facilities that allow it to purchase corporate bonds, including new issues. The Fed stopped short of buying corporate debt during the 2008 financial crisis.

The benchmark S&P 500 index ended 2.9 per cent lower on Monday, while the yield on the benchmark 10-year Treasury note, which moves inversely to price, was almost 0.10 percentage points lower at 0.76 per cent.

European equities bounced from lows on the Fed’s new intervention, but not enough to crawl out of the red. The Stoxx 600 was 4.3 per cent lower and the UK’s FTSE 100 closed down 3.8 per cent.

“It’s huge,” said Jim Shepard, who runs investment-grade bond issuance at Mizuho in New York. “It’s a bazooka and it was needed. The programmes that had been announced were good but didn’t go far enough. This goes far enough.”

The first facility to prop up large employers involves bridge financing for up to four years for investment-grade companies, in exchange for purchases of newly issued corporate debt by the Fed. Businesses could defer principal and interest payment to preserve cash for up to six months, but they would not be allowed to buy back shares or pay dividends if they tap the facility.

A second programme would allow the Fed to purchase corporate debt in the secondary market.

The Fed also on Monday revived TALF — a facility dating back to the 2008 financial crisis — which gives the Fed the ability to buy securities backed by student, car and credit-card loans, as well as loans to businesses through the Small Business Administration.

The US central bank said TALF and the other new programmes combined would provide up to $300bn in financing for “employers, consumers, and businesses”, backed by the US Treasury department, which is offering $30bn in equity from its Exchange Stabilisation Fund to support the measures.

Separately, the Fed also expanded existing programmes to ease strains in the markets for municipal debt and the short-term loans known as “commercial paper” and said it would soon announce a “Main Street Business Lending Programme” to lend directly to small businesses.

The Fed had originally planned to purchase at least $500bn in US Treasuries and at least $200bn in “agency” mortgage-backed securities — those issued by quasi-governmental entities Fannie Mae, Freddie Mac and Ginnie Mae — as it slashed its main interest rate to near zero eight days ago. In recent days it has sped up the pace of these purchases, after earlier interventions failed to address strains in both debt markets.

By Friday, it had completed roughly half of its planned Treasury purchases, as well as about a third for the agency mortgage-backed securities. Following a meeting of the Federal Open Market Committee, its monetary policy setting committee, the US central bank is no longer putting a numerical cap on its purchases of Treasuries and mortgage-backed securities, instead signalling that it is prepared to buy as much as necessary.

“This is shock and awe from the Fed,” said Jim Paulsen, chief market strategist for the Leuthold Group. “This has some real merit of easing some of these short-term financial illiquidity issues.”

Moreover, Mr Paulsen said, the decision signals “nothing is off the table” for the central bank in terms of additional policies it may roll out to support financial markets.