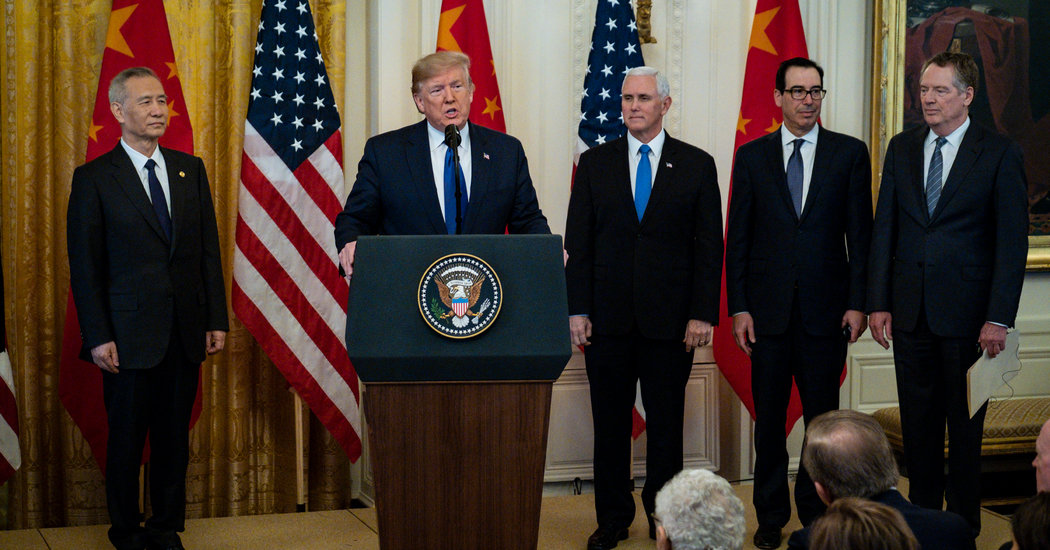 WASHINGTON — A government retirement fund on Wednesday halted plans to invest in Chinese stocks this year, after growing criticism that the move would channel the savings of government workers to companies that are working against the national security goals of the United States.

In a statement, the Federal Retirement Thrift Investment Board, which manages the retirement savings plan, said it had “deferred the transition” of the fund as a result of “a meaningfully different economic environment” related to the pandemic, as well as the nomination of three new board members to oversee the fund.

The fund, part of the Thrift Savings Plan, which is similar to a 401(k), is not well known outside Washington policy circles. But the plan’s effort to diversify the international stock portion of the $593.7 billion it has in assets under management has become a flash point in an increasingly contentious relationship between the United States and China.

The decision comes as President Trump and members of his administration adopt a sharper tone toward China. They have blamed China for concealing the origins of the coronavirus epidemic, and criticized its efforts to buy up global supplies of masks and medical products earlier this year, before the global scale of the pandemic was clear.

In recent weeks, Mr. Trump has also grown more critical of the trade deal he signed with China in January, amid mounting evidence that Chinese purchases of American products are falling short of what the pact required.

“As I have said for a long time, dealing with China is a very expensive thing to do,” Mr. Trump tweeted Wednesday morning. “We just made a great Trade Deal, the ink was barely dry, and the World was hit by the Plague from China. 100 Trade Deals wouldn’t make up the difference — and all those innocent lives lost!”

It remains to be seen whether the decision by the retirement plan is an isolated action, or will presage more efforts to delink the American and Chinese financial systems. Such efforts could roil financial markets in both the United States and China, as well as cross-border investment.

Politicians of both parties, but particularly some in the Trump administration, have called for decoupling the Chinese and American economies, arguing that American efforts to work closely with China have strengthened its authoritarian government, to the detriment of the United States.

Others have criticized a lack of transparency in the Chinese financial system that could be putting American investors at risk of fraud. Chinese law restricts the company documentation that auditors can transfer out of the country, limiting their visibility to American regulators.

Clete Willems, a former Trump administration official who is now a partner at the law firm Akin Gump, said the decision “may just be the start of a broader reassessment about the risks of investing in China.”

“It will be difficult for China to address the national security concerns for all of its companies, but China should at the very least open up the books and records of its companies to U.S. regulators to alleviate the financial ones,” Mr. Willems said.

The board that controls the fund had for months defended its plans to increase its exposure to China, saying that it was simply seeking to diversify its investments and provide better returns for its savers.

But members of Congress, the Trump administration and outside advisers have criticized the move, saying that it would pump funds into some companies that work with the Chinese military or have been the subject of sanctions by the U.S. government. The Thrift Savings Plan manages the retirement savings for more than 5.9 million current and former government employees, including members of the military.

Marco Rubio, a Republican senator from Florida who was one of the most vocal critics of the China investment, had threatened bipartisan legislation to block the move. And some Trump administration officials had discussed an executive order to accomplish the same goal.

In a statement Wednesday, Eugene Scalia, the secretary of labor, said he was “pleased” with the board’s decision. “The millions of federal employees, retirees and service members participating in the plan should not be placed in the untenable position of choosing between forgoing any investment in international equities, or placing billions of dollars in retirement savings in risky companies that pose a threat to U.S. national security,” he said.