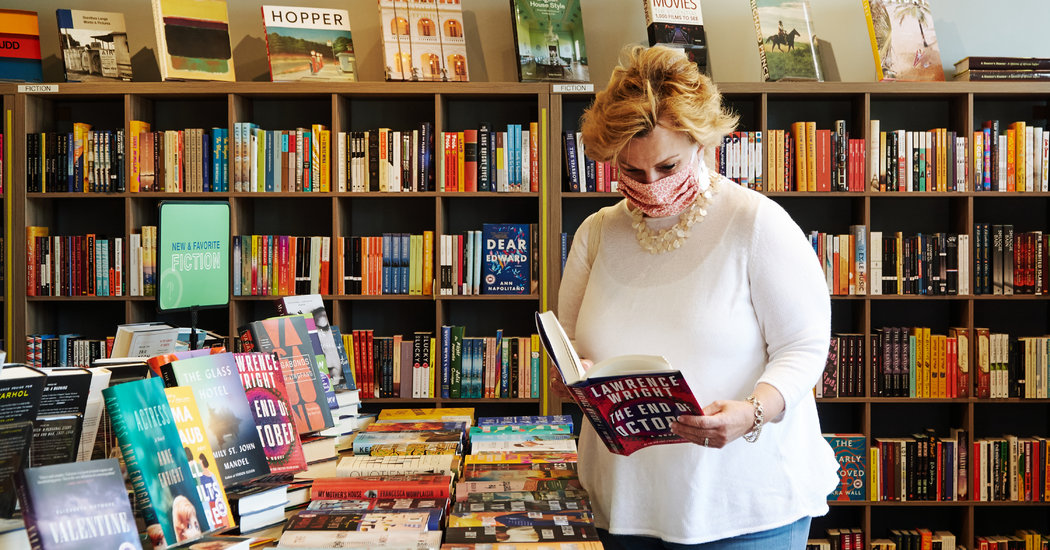 Last fall, Kyle Hall’s bookstore was destroyed by a tornado. This spring, it was almost wiped out by a pandemic.

For the past two months, ever since Texas ordered nonessential businesses to shut down, Mr. Hall, the manager and co-owner of Interabang Books in Dallas, has taken one unprecedented step after another to keep the store open. In March, Interabang transformed from a brick-and-mortar shop into an online retail business. When the stay-at-home order was lifted at the end of April, it became a curbside takeout operation. Staff members redesigned the storefront display, cramming 100 titles in the window so that customers could browse at a safe distance.

“We called it the bookstore bakery case,” Mr. Hall said. “That was strange, but in a week we got used to it.”

Then the state’s orders changed again, and retailers were told they could open at 25 percent their usual capacity. Interabang’s staff reorganized the layout of the 2,000-square-foot space and put markers with the store’s logo on the floor to signal how far apart customers should stand. They put hand sanitizer next to the register, provided masks and gloves and reopened on May 1. This past weekend, around 150 customers came to shop, most wearing masks.

“We felt like, if the governor is going to allow businesses like ours to reopen, and doing business was permissible, then we wanted to do it,” Mr. Hall said.

Even as health experts working with the Trump administration warned a Senate panel on Tuesday against reopening the country too quickly, the U.S. retail sector is beginning to get back to business. As some states allow a handful of businesses to reopen and other regions charge ahead full throttle, it is an experiment for bookstore owners and other retailers attempting to strike a balance between staying afloat and keeping workers and customers safe.

Interabang may be something of an optimistic outlier for now. Elsewhere in Texas,Valerie Koehler, the owner of the Houston bookstore Blue Willow, said she and her staff are unsettled by the prospect of shoppers roaming through the store.

“The staff resoundingly said, ‘We are not ready,’” she said. “They are wary of customers coming in who might expose us.”

Among retail businesses, bookstores, especially smaller independent stores, face particular challenges as they navigate reopening. Many indies occupy cramped spaces with warrens of bookshelves, and serve as community centers and cultural outposts as much as retail operations. Book lovers often come in to linger, browse and chat with the staff about what to read next, all behaviors that in a pandemic are potentially life-threatening.

Some booksellers are now in the awkward position of having to disappoint eager customers. Malaprop’s in Asheville, N.C., told subscribers to its newsletter that even though the state had cleared bookstores to open, it would remain closed until at least May 19. When it reopens, shoppers will be allowed to visit by appointment only, to limit the number of people in the store, and face coverings will be mandatory.

In Georgia, where some businesses were allowed to open in late April, Frank Reiss, the owner of A Cappella Books in Atlanta, said his store is sticking with deliveries and curbside orders. “I am not anticipating reopening to the public in quite a while, based on what I hear in the news,” he said. “The responsible thing is not to encourage people gathering.”

Some larger bookstore companies are taking a more bullish approach. Last week, Books-A-Million said it was reopening the majority of its 200 outlets after implementing some safety measures, including masks for employees, acrylic barriers at checkout counters and self-distancing markers in the aisles. But establishing uniform practices even within a single chain has been impossible, as some states have more stringent rules for how many customers can come in at once, some require masks while others don’t, and the guidelines keep shifting. Then there’s the question of whether shoppers will feel comfortable coming into stores. “Certainly, there’s concern that traffic would come back,” said Scott Kappler, Books-A-Million’s chief marketing officer, who noted that the chain will continue to offer curbside shopping for more cautious customers.

Barnes & Noble has opened 31 of its outlets in 10 states, and by the end of this week it plans to open 20 more stores in five additional states. Another 500 of its stores are doing curbside sales. In stores that are open for browsing, furniture has been removed and signs encouraging social distancing are placed at the entrance and throughout the store. Booksellers will wear masks, and customers will be required to wear masks in places where the state mandates it. Trolleys have been set out with signs instructing customers to leave any books they have touched on the cart, so that the books can be placed in quarantine for five days — long enough for any potential viral particles to die off — then reshelved.

“We’re thankful that we sell a product that is pretty easy to manage from a health and safety perspective,” he said. “Sales are dramatically down, but haven’t been eviscerated in quite the way they have been for fashion retailers.”

But giant retailers that operate warehouses have additional workplace safety issues to contend with. Amazon and Barnes & Noble have had outbreaks of coronavirus in their warehouses, and last month an employee at Barnes & Noble’s New Jersey distribution center died from complications related to coronavirus, a company spokesman confirmed. The company said the distribution center had safety measures in place since early March, such as providing gloves and cloth face masks for employees, reducing the number of staff members in the warehouses, disinfecting work stations and equipment and closing the facility periodically for deep cleaning.

The pandemic and the subsequent economic crisis struck at a moment when booksellers across the country were thriving. After many smaller retailers were crushed by the rise of Amazon, a shift among consumers toward local shopping helped to drive a resurgence among independent booksellers. The number of independent bookstores across the country rose to 2,524 store locations in 2019, up from 1,651 in 2009, according to the American Booksellers Association’s membership figures.

The coronavirus outbreak threatens to wipe out those gains. When stay-at-home orders went into effect, most U.S. bookstores closed. Many had to furlough or lay off their staff. Others stayed afloat through a combination of government loans to small businesses, online orders and in some cases, community crowdfunding. A GoFundMe campaign for City Lights, the famous San Francisco landmark bookstore, raised nearly $500,000 in the past month. Best-selling authors like James Patterson and Rick Riordan and nonprofits like the Book Industry Charitable Foundation have also made donations or issued grants to local shops.

Online sales, however robust, aren’t enough for most brick-and-mortar operations. Bookstores who are selling titles through Bookshop.org, which aims to be Amazon for independent shops, get 25 percent of the book’s list price, far less than they would make through a direct sale, though they don’t have to pay for inventory or shipping. At Third Place Books in Seattle, which closed all three of its outlets on March 24, online sales are 20 times higher than normal but still account for less than half of the store’s regular sales, and the store had to furlough 25 staff members. This week, it started offering curbside for customers, and was able to hire back 15 employees, said Robert Sindelar, the managing partner at Third Place.

Even when stores do open, it will be difficult to recover lost revenue. Foot traffic will be down, either because states have limited how many shoppers can enter stores or because customers are concerned about going in. Most bookstores rely on author signings and community events to drive sales, and such gatherings are unlikely to be safe until the pandemic has passed.

“Sales are down across channels, and the cost of business is going up,” said Allison Hill, the chief executive of the American Booksellers Association. “There’s no doubt this crisis has hit independent bookstores hard.”

Remarkably, the mass closure of brick-and-mortar bookstores hasn’t led to plunging book sales. Print unit sales grew by nearly five percent in the week ending May 2, compared with the same period last year, according to NPD BookScan, with gains in adult fiction and juvenile nonfiction. Big-name authors like Stephen King and John Grisham are still seeing robust sales. Print book sales through the beginning of May have remained steady compared with the first four months of 2019, with a drop of just 2 percent, according to NPD BookScan.

Analysts say it’s likely that most of those sales are going through Amazon and other big retailers. Some in the industry worry that Amazon will gain even more market share through its online dominance, and that its gains and smaller stores’ losses could be permanent.

The anxiety among many booksellers considering when and how to reopen stems in part from the fact that the retail guidelines issued by states might not apply equally to all stores, particularly small bookstores where even the employees might have difficulty maintaining social distances.

“The guidelines are very confusing,” said Marianne Reiner, the owner of Run for Cover, a 700-square-foot bookstore in San Diego. “They’re not designed for small business.”

In California, where last Friday the state began allowing bookstores to offer curbside shopping, some booksellers remain wary. The California Independent Booksellers Alliance this week is hosting a virtual town hall for booksellers with a nurse practitioner who will take questions and offer information on how to protect employees and customers from spreading or catching the virus.

Across the state, stores like Run for Cover, Napa Bookmine in Napa, Green Apple Books in San Francisco and Vroman’s in Pasadena are gearing up for curbside shopping. “As a business, we badly need the revenue, however, the threat of the virus remains real, and we have to balance those two things,” said Julia Cowlishaw, chief executive of Vroman’s. Others, like the Ripped Bodice in Los Angeles, are restricting their operations to online orders and shipping for now. “I would feel very uncomfortable about even doing curbside at this stage,” said Teresa Lynch, one of the store’s booksellers.

The Book Catapult, an independent store in San Diego that will begin offering limited curbside shopping this week, is asking customers to wear masks and practice social distancing when they come to pick up books. Seth Marko, one of the store’s co-owners, said he’s not eager to open the store for browsing.

“If we are concerned with keeping the store sanitized, safe for customers and booksellers, and limiting the number of people through the doors, then the virus is still too prevalent, and we should not be encouraging things like shopping for books in person just yet,” he said. “Believe me, we would like nothing more than to go back to normal, just like everyone else.”