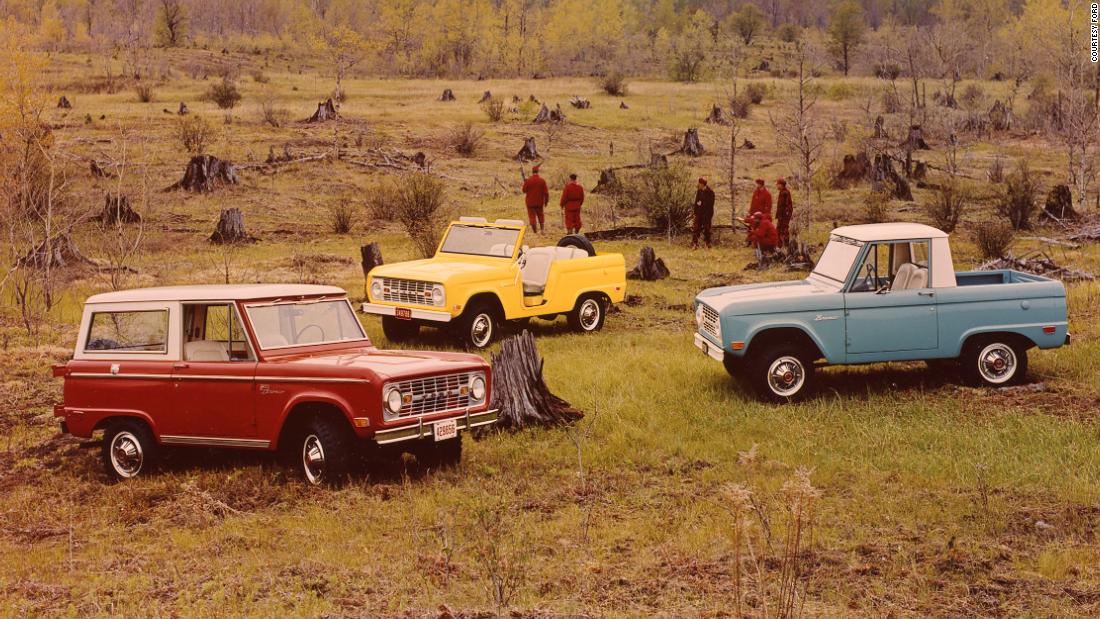 There will be a two-door midsized version of the off-road SUV, a four-door version and a smaller off-roader called the Bronco Sport. In effect, Ford is creating a separate sub-brand for off-road SUVs under the Bronco name.

As it brings back a model name that’s been out of production for almost 25 years, Ford’s target is obvious: Fiat Chrysler Automobiles’ (FCAU) Jeep.
Today, buyers will pay close to sticker price for a Jeep SUV, instead of negotiating a deep discount with the dealer, then will often pay more for Jeep accessories to customize their purchase. Plus, fans also buy Jeep-branded clothing, baby strollers and dog toys. The four-door Jeep Wrangler Unlimited has the best resale value among off-road SUVs in 2020, according to Kelley Blue Book.

Jeep’s strength lies in the off-road capabilities of its core product, the Wrangler, the ancestral connection to the rugged four-wheel-drive car used in World War II.

Ford was one of the main contractors for those vehicles and built 270,000 of them during the war. The famous seven-slot stamped metal grill, a version of which adorns Wranglers today, was designed by Ford. But Ford was building those General Purpose vehicles, or GPs, under license to help with the war effort. The design remained with Willys-Overland Motors after the war. Through a series of mergers and acquisitions Jeep, and that famous grill, ended up as the valued property of Fiat Chrysler.

Ford eventually found its own valued property in the Bronco name. Original Broncos, the smaller ones built from 1966 to 1977, are hot items among collectors. Prices for classic Broncos have increased 76% over the last three years, according to the collectible car company Hagerty. Some of that increase is probably due to Ford’s impending reintroduction of the brand, which has brought new attention to the old models. But, even before that became public knowledge, classic Broncos were leading a surge in collectible SUVs.

Taking on an old foe

Back in the early 1960s, before creating the original Broncos, Ford researched the competition, which also included the recently introduced International Harvester Scout, to find out what owners found lacking in their current off-road vehicles.

“What the target audience didn’t like about the [Jeep] CJ and the Scout was the fact that it had a bumpy ride and wasn’t very comfortable,” said Ford archivist Ted Ryan in an interview with CNN Business.

So Ford designed the original Bronco to provide a nicer ride on highways while still being able to tackle rugged off-road environments, he said.

Ford did that sort of research to see how it could improve upon today’s off-road models, such as the Jeep Wrangler and Toyota’s Tacoma pickup.

In contrast to those models, dealership lots these days are filled with so-called crossover SUVs designed to provide comfort and safe handling on the road, but not to venture far from smooth pavement. Sales of these car-like crossovers have exploded in recent years, virtually taking over the automotive world. Still, there remains a market for SUVs designed for rock-strewn trails and washed out gullies.

“We set up expert panels of enthusiasts and people that really understand this space because we hadn’t been there for over a couple of decades,” said Mark Grueber, Ford’s consumer marketing manager. “We went out and immersed ourselves in different customer events and tried to live and breathe with the customers and understand what they liked and didn’t like with the current products that are out there.”

About half, or a little less, of Bronco owners will frequently take them off-road, said Greuber. That statistic can vary a lot depending on the definition of “off-road” which can range from a gravel road to scrambling over a boulder with one wheel hanging in the air.

To introduce new Bronco owners and potential buyers to the Bronco’s capabilities, Ford is creating four off-road driving parks with the awkward name of Ford Offroadeos. Each will include a variety of terrains for drivers of various skill and courage levels. Land Rover has similar sorts of locations around the world where it can show off the capabilities of its SUVs and teach drivers how to use them.

Ford is also working with an existing online community, thebronconation.com, to help introduce the new SUVs, the company said. These efforts are similar to clubs and off-roading events, most independently organized, that Jeep uses to build a sense of camaraderie around its brand and products.

With the Bronco, Ford is bringing back a name that, like the Mustang, resonates with a certain set of consumers. The company now even has a separate division, Ford Icons, devoted to managing just these brands.

“It’s a responsibility we don’t take lightly,” said David Pericak, director of product line management for Ford Icons. “If we do it wrong, we could potentially lose the iconic status.”