Fox News Stars Touted a Malaria Drug, Until They Didn’t 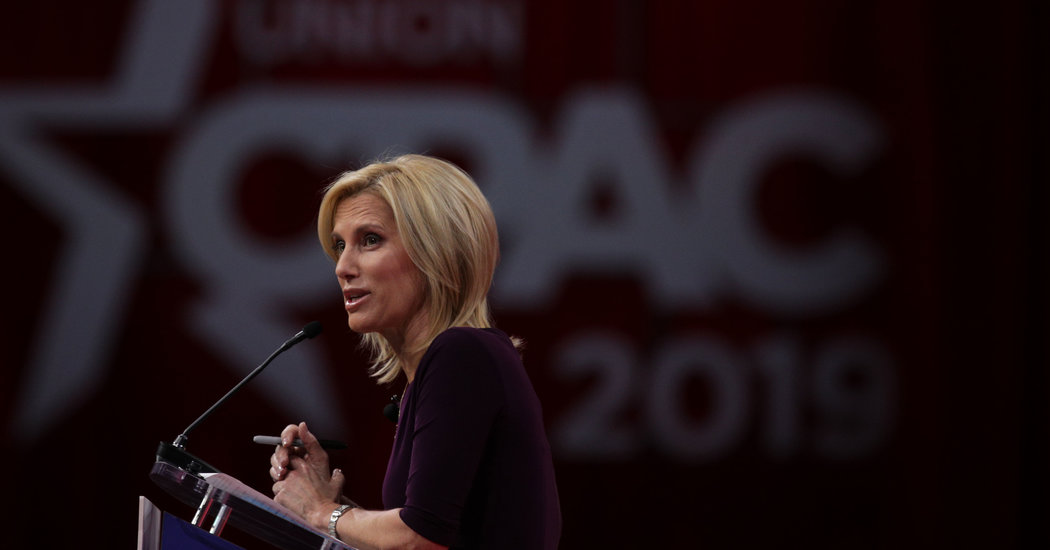 The drug was “a game changer” in the fight against the coronavirus, the conservative anchor declared. She booked recovered patients to describe their “miracle turnaround” — “like Lazarus, up from the grave,” as Ms. Ingraham put it. Anyone who questioned the drug’s efficacy was, she said, “in total denial.”

“I love everybody, love the medical profession,” the host said on April 3, after listing off public health experts who questioned the cure. “But they want a double-blind controlled study on whether the sky is blue.”

But as of Wednesday last week, Ms. Ingraham was no longer talking about hydroxychloroquine, and she hasn’t brought it up on her show since.

Her fellow Fox News prime-time stars, Tucker Carlson and Sean Hannity, have also cut back on referring to the drug. In fact, since April 13, hydroxychloroquine has been mentioned about a dozen times on Fox News, compared with more than 100 times in the four previous weeks, according to a review of network transcripts.

The shift came as President Trump has dialed back his public zeal for the treatment — and as studies and health experts have increasingly cast doubt on the efficacy of the drug in treating coronavirus. On Tuesday, a study of 368 Veterans Affairs patients showed that the use of hydroxychloroquine was associated with an increased risk of death.

Mr. Trump’s own medical team, including Dr. Anthony S. Fauci, has urged caution, noting the drug’s potential adverse effect on patients with heart troubles. But by mid-March, the drug was a staple of the right-wing media venues that Mr. Trump follows closely, including Rush Limbaugh’s radio show and Fox News prime time.

Ms. Ingraham, who declined to comment for this article, was an enthusiastic advocate for the treatment. On April 2, she told her viewers that “nearly all the experts that I’ve talked to, and the studies I’ve read, review this information, the evidence, and at this point it’s come across as pretty much of a game changer.” The next day, she met with Mr. Trump in the Oval Office to personally pitch him on the drug.

Doctors around the country have prescribed hydroxychloroquine to patients for weeks despite the lack of rigorous trials. Some physicians say, given the speed and severity of the coronavirus, they are turning to any medicinal tools they can to save lives, even as little evidence has emerged that hydroxychloroquine is a panacea. Gov. Andrew M. Cuomo of New York has allowed that, “anecdotally,” doctors have seen positive results from the treatment, while reminding people that reliable data could take months to collect.

On Fox News, though, Ms. Ingraham acknowledged those caveats in passing, leaving an impression that a skeptical bureaucracy was keeping Americans from benefiting from a miracle drug.

On April 9, she began her program by mocking the director of the Centers for Disease Control and Prevention, Dr. Robert Redfield, for “essentially dismissing, trashing” hydroxychloroquine “despite all of its success stories.” She told viewers that the doctors booked on her program that night — “my medicine cabinet” — would “set the record straight.” (Fox News said on Wednesday that Ms. Ingraham’s segments about hydroxychloroquine always included a doctor or recovered patient.)

Later on the show, she interviewed a patient, Billy Saracino, who, by his account, recovered from the coronavirus because his wife was inspired by “The Ingraham Angle” to help arrange a prescription for hydroxychloroquine.

“It is amazing that the left and the medical establishment is still in total denial about the potential of these decades old drugs,” Ms. Ingraham declared.

Within a week, she had stopped talking about the drug on-air.

Mr. Hannity, while not as prominent a hydroxychloroquine cheerleader as Ms. Ingraham, also highlighted the use of the drug, at one point citing a study that, he told viewers, showed “hydroxychloroquine is rated now the most effective therapy by doctors, over 6,300 of them surveyed, for coronavirus.”

Mr. Hannity, who likes to remind viewers that he is “not a doctor,” routinely asked guests if they would take hydroxychloroquine for treatment if they were infected with the disease.

Fox News, the country’s top-rated cable network, carries outsize influence among viewers who flock to its popular opinion programs. Hydroxychloroquine was first cited on the network during a late-night news show on March 11. It jumped to prime time a few days later, when a guest named Gregory Rigano touted the drug to Mr. Carlson and Ms. Ingraham.

“Tucker Carlson Tonight” identified Mr. Rigano as an adviser to the Stanford University School of Medicine, but Stanford has since said he has no affiliation with the institution; Mr. Rigano has not been back on Fox News.

On Wednesday, Dr. Mehmet Oz, a frequent guest on Fox News, appeared on “Fox & Friends” and spoke about the Veterans Affairs study that showed no clear positive benefit of treating the coronavirus with hydroxychloroquine.

At first, Dr. Oz offered some caveats, noting the study was not a controlled trial and focused on “older and quite a bit sicker patients.” But pressed by the co-host Brian Kilmeade, Dr. Oz conceded that “the fact of the matter is, we don’t know.”

“There’s so much data coming from so many places,” he told viewers, “we are better off waiting for the randomized trials Dr. Fauci’s been asking for.”