Freezers Sell Out as Consumers Stock Up 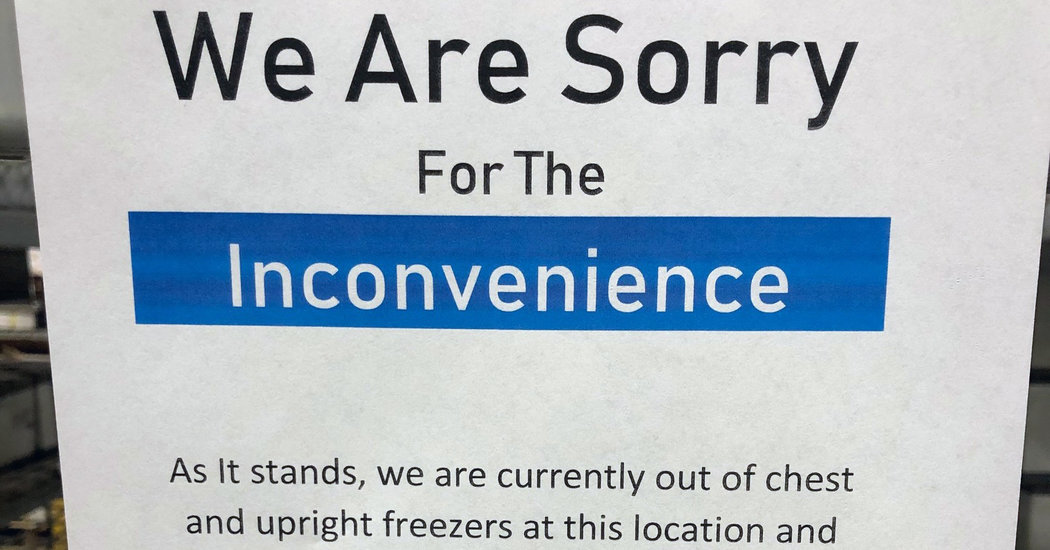 The calls come every five minutes, Chris Rouse said, all asking for the same thing: a small chest freezer. That’s a problem for Mr. Rouse, an appliance salesman in the Town of Wallkill, N.Y. He has no more to sell.

“As far as I know, everyone’s sold out,” said Mr. Rouse, who has worked at Appliance City, a store about 75 miles north of New York City, for 30 years. “It’s crazy.”

As the coronavirus continues to spread, and people stock up to hunker down for weeks or longer, freezers are getting harder to find, making them another unexpectedly hot commodity for consumers.

The demand is for small chest freezers of about five cubic feet, Mr. Rouse said. They’re also mostly made in China, which makes restocking even harder.

“Suppliers didn’t give us any time period of when they’re coming back in,” he said.

The alternative is a full-size refrigerator that includes a freezer, but most people already have one. “They’re just looking for something supplemental,” he said.

Mr. Rouse called it a “phenomenon” and said it’s the first time in his decades-long career that he’s seen small chest freezers sell out.

A representative for Home Depot said on Saturday that the retailer does not break down sales by category but noted that “many items across our store are in high demand.”

A supervisor at a Home Depot in the Bronx confirmed that the store was selling out of freezers within hours of restocking. It takes nearly a week for a new shipment to arrive, he said.

In Southampton, N.Y., a P.C. Richard & Son employee said the company was sold out of freezers and it was unclear when it would get another shipment.

And Lowe’s said in a statement on Saturday that it has “seen increased customer demand for freezers, and our team is working around the clock to replenish inventory.”

“We are seeing a surge in demand across the country for products that people need to work or learn from home, as well as those products that allow people to refrigerate or freeze food,” said the executive, Corie Barry.

Smaller stores, however, appear to face a steeper task when it comes to restocking.

At MD Broadway Electronics in the Bronx, Marcos Diaz said he sold out of freezers in the last two weeks.

Mr. Diaz, who has owned the store for 11 years, said he didn’t have many freezers in stock before demand increased. Sales for that appliance typically jump in the summer months after a slow winter. The freezers he had, Mr. Diaz said, would usually last him a few months.

“This was unexpected,” he said on Saturday. “Otherwise, I would have bought a lot of freezers.”