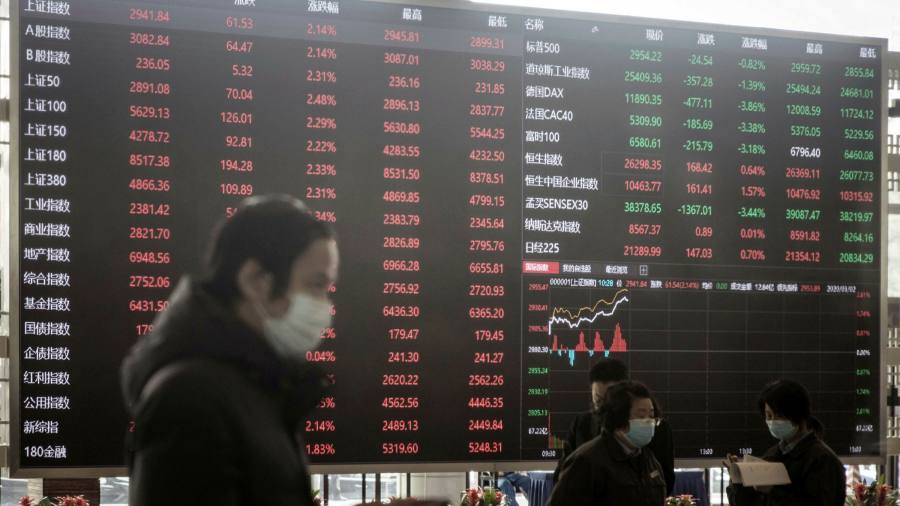 Global stocks followed Wall Street higher after US equities erased all of their losses for the year, buoyed by hopes of economic recovery following the coronavirus pandemic and further central bank support.

In early trading on Tuesday, Hong Kong’s Hang Seng climbed 1.3 per cent to put the benchmark on track for sixth straight day of gains. Australia’s S&P/ASX 200 rose 2.4 per cent as traders returned from Monday’s public holiday while China’s CSI 300 index of Shanghai- and Shenzhen-listed stocks edged up 0.4 per cent.

Overnight, Wall Street’s S&P 500 closed up 1.2 per cent due to optimism among investors that US economic activity is rebounding following the easing of Covid-19 lockdowns.

However, futures markets tipped US equities to pull back 0.2 per cent when trading kicks off on Tuesday. The FTSE 100 was expected to rise 0.1 per cent.

US stocks have climbed more than 40 per cent from their mid-March low, bringing the S&P 500 into positive territory for the year. Investors have so far brushed off a recession induced by lockdowns to contain the coronavirus and widespread civil unrest following the killing of George Floyd.

“The good news is that this shows central banks’ effort to stabilise the market have worked,” said Tai Hui, chief Asia market strategist at JPMorgan Asset Management, of the rally in US stocks.

But he added that global economic activity was “far from where we were before the pandemic”. A host of threats also loom over the recovery, he said, in the form of another wave of infections, US-China trade tension and the ripple effects of rising unemployment and corporate bankruptcies.

Elsewhere in Asia, Japan’s Topix slipped 0.4 per cent. Official data on Tuesday showed that wages in the world’s third-biggest economy fell in April as a result of efforts to contain the spread of Covid-19.

The yield on 10-year US Treasuries, viewed by investors as a haven asset, fell 0.03 percentage point to 0.849 per cent.

Oil prices rose following a sell-off on Monday that was prompted by Saudi Arabia’s admission that the extension of Opec+ production cuts until the end of July would not include voluntary curbs by a trio of Gulf producers.