Global stocks rise after Japan launches latest round of stimulus 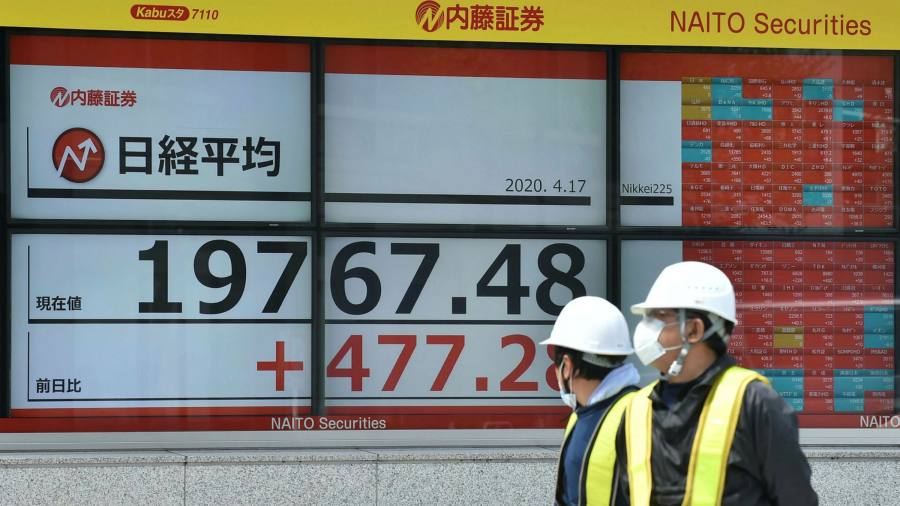 Global stocks climbed after stimulus measures from Japan’s central bank highlighted the lengths policymakers are willing to go in their efforts to shore up the world economy.

US investors were keeping a close eye on states’ plans to ease lockdown restrictions as Wall Street opened this morning in New York. The S&P 500 was up 0.8 per cent at the opening bell, with a slide in oil prices weighing on the benchmark’s energy sector. The tech-heavy Nasdaq Composite was 0.9 per cent higher while the Dow Jones Industrial Average edged up 0.4 per cent.

European stocks trimmed earlier gains, with the continent-wide Stoxx 600 up 1.2 per cent in afternoon trade. At its highest point on Monday, the composite benchmark was close to its peak for this month, although it still remains down about 20 per cent for the year. London’s FTSE 100 was up 1.3 per cent while Frankfurt’s Dax rose 2.2 per cent.

In commodities, oil prices slid after one of the most turbulent weeks in history for crude oil. Brent, the international benchmark, was down 8.5 per cent in mid-morning trading. The June contract for US standard West Texas Intermediate was down 38.4 per cent at $12.24 a barrel after the world’s largest oil-backed exchange-traded fund said it would sell all futures contracts for that month by the end of April.

Fears linked to an oversupply of crude and a hit to demand triggered from the Covid-19 pandemic have pummelled WTI prices, which last week traded in negative territory for the first time in history.

Japan’s Topix benchmark closed 1.8 per cent higher after the Bank of Japan pledged to buy an unlimited quantity of government bonds as part of its efforts to support the world’s third-largest economy. The BoJ said it would quadruple its limit on corporate debt purchases to ¥20tn ($186bn).

“Stocks, as usual, are much more optimistic that the recovery will come, even if it may be delayed,” said Christopher Smart, chief global strategist and head of the Barings Investment Institute. “Some of this is surely helped by central bank programmes to purchase corporate debt.”

But he warned that markets may be “getting ahead of itself”.

“For the global economy, the terrors ahead still depend overwhelmingly on how fast doctors, scientists and governments develop strategies to test, track and treat Covid-19,” added Mr Smart.

Investors are pinning their hopes on more stimulus from central banks in the US and Europe to combat the economic impact of the coronavirus.

The US Federal Reserve convenes on Tuesday for its scheduled two-day policy meeting while there is pressure on the European Central Bank to deliver more supportive policies at its meeting two days later.

But “central banks are likely to wind back a little, focusing less on blockbuster new programmes and more on improving the operational aspects of existing programmes”, said Frederic Neumann, co-head of Asia economic research at HSBC. The ECB and the Fed “will probably stop to catch their breath”.

“With the pace and scale of what has already been announced, it is going to be much harder for central banks to positively surprise from here,” added Matthew Cady, investment strategist at Brooks Macdonald, which has £12.2bn under management. The Fed “only really [has] fine-tuning left”, he said, adding that the “market is sensing that some central banks might be running out of fresh ammunition”.

Investors will this week be focusing on reports on US and eurozone gross domestic product for the first quarter of 2020. The figures are expected to shed light on the scale of the drop in output caused by the coronavirus pandemic. The growth data will coincide with as stream of quarterly earning reports from major companies.

Adidas, one of the world’s biggest makers of sportswear, warned on Monday that coronavirus could push it in the second quarter to its first loss in more than four years as its revenues shrink due to store closures.