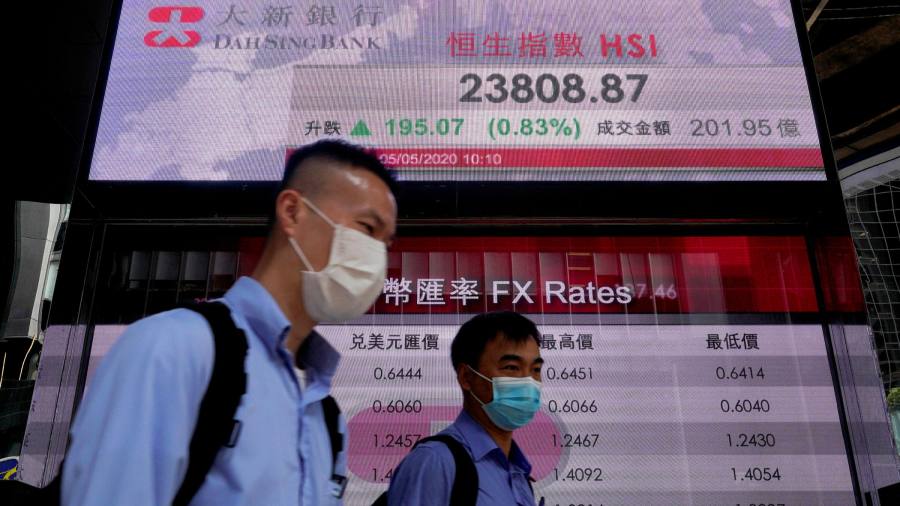 Global stocks nudged higher on Wednesday, with investors focused on the gradual reopening of the world’s big economies following weeks of lockdown.

European markets brushed off a cautious opening to edge higher by early afternoon. The regional Stoxx Europe 600 benchmark was up 0.1 per cent, while in London the FTSE 100 rose 0.5 per cent.

On Wall Street, futures tied to the S&P 500 were off their best levels of the session, but still gained 0.3 per cent after a rise of nearly 1 per cent on Tuesday.

Spain, Italy and India have tentatively eased restrictions and let some businesses resume operations this week while more US states have begun to lift lockdowns. Many hope these steps will revive growth and oil demand.

Donald Trump, the US president, said at a rally in Arizona on Tuesday that the US could not be “closed for the next five years” as the White House stated it was considering winding down its coronavirus task force.

Faint glimmers of light are discernible

“The world is inside a dark tunnel, surrounded by big unknowns, and financial markets are facing a toxic mix of unpredictability, anxiety and uncertainty that is fuelling volatility. Yet faint glimmers of light are discernible,” said Robert Bergqvist, chief economist at Nordic bank SEB.

However, the rollout of government response packages and signs of a gradual restart of the world’s economies and manufacturing activity were all cause for guarded optimism, Mr Bergqvist added.

Oil prices, which have been buoyed this week by optimism that production cuts could make a dent in a supply glut, turned lower on Wednesday afternoon.

Brent crude, the international benchmark, was down 2.2 per cent at $30.30, having breached $30 on Tuesday for the first time in six weeks with a jump of almost 14 per cent. West Texas Intermediate, the US marker, was down 5.5 per cent at $23.20 a barrel, having rallied 20 per cent in the previous session.

In Asia-Pacific markets, China’s CSI 300 index of Shanghai- and Shenzhen-listed stocks closed up 0.6 per cent as mainland markets reopened after a five-day holiday. Australia’s S&P/ASX 200 shed 0.4 per cent, while Hong Kong’s Hang Seng benchmark rose 1.3 per cent. Markets in Japan were closed for a public holiday.

The reopening of Chinese markets came amid escalating tension between Beijing and Washington over the origins of the coronavirus pandemic. Mr Trump has asserted the virus was leaked from a lab in Wuhan without presenting any evidence. China denies the lab was involved.

The stand-off has stoked fears that the trade war between the world’s two largest economies could be reignited.

In government bonds, US 10-year Treasury yields rose 0.056 per cent to 0.71 per cent as investors moved out of the debt.