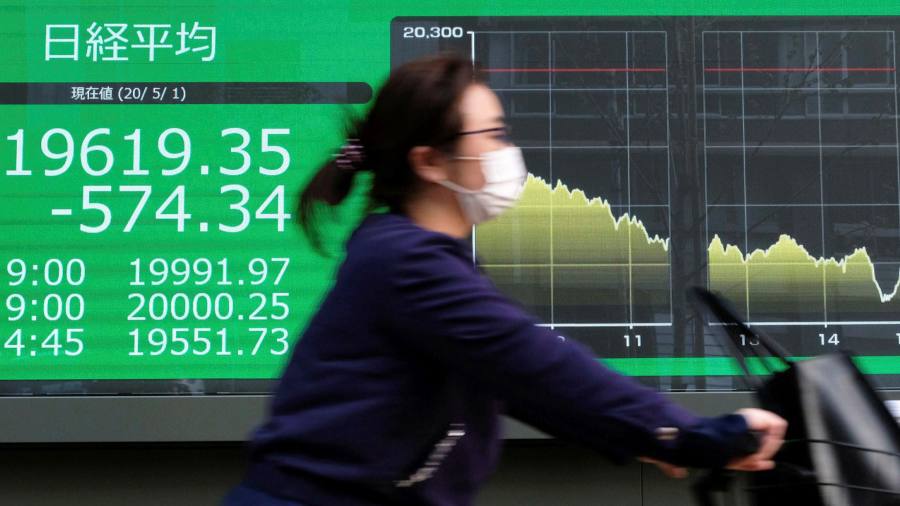 Global stock markets dropped sharply on Friday, as the spectre of a new flare-up in US-China relations added to concerns over the corporate and economic impact of the coronavirus crisis.

London’s FTSE 100 slid 2.2 per cent on the first day of trading in May, while futures tied to the S&P 500 on Wall Street fell 1.8 per cent. Most continental European bourses were closed for a public holiday.

The sell-off could mark a turn in sentiment for investors, who have been emboldened of late by hopes of a potential treatment for Covid-19 and the ending of lockdowns in the US and Europe. US stocks in April registered the biggest monthly rally since 1987.

But sentiment has darkened at the end of this week, following more exceptionally weak US jobs data and red flags in the overnight earnings from Amazon and Apple, two important companies in a tech sector that has led the US market’s rebound.

Amazon warned that severe virus-related strain could leave operating income in the second quarter anywhere between a loss and gain of $1.5bn. That sent shares in the ecommerce giant down about 5 per cent in pre-market trading.

Amazon’s warning, alongside Apple’s decision to withhold guidance for the current quarter, has raised fresh concerns over the corporate impact of the global health crisis. Shares in the iPhone maker slipped 2.5 per cent pre-market.

Adding to investor concerns were Donald Trump’s attacks against China, which escalated at his daily Covid-19 briefing on Thursday.

The US president raised the prospect of using tariffs against Beijing, but denied a US media report that he was considering cancelling US debt held by China.

“The last thing the financial markets need now as they grapple with Covid-19 is a renewal of the trade war between the US and China,” said Derek Halpenny, head of European markets research at MUFG.

“There is certainly a high risk of geopolitical tensions escalating considerably as lockdowns reverse and now this could include the US imposing additional trade tariffs on China.”

China’s renminbi weakened to its lowest level since early April against the US dollar as emerging market currencies sold off, while stocks in Asia fell.

The offshore-traded renminbi slipped 0.6 per cent to Rmb7.1217 per dollar, its sharpest move since March.

“This exchange rate is vitally important for markets and a further move higher would send a signal and flag a devaluation risk that would spook markets,” said Steen Jakobsen, Saxo Bank’s chief economist.

The S&P/ASX 200 benchmark in Australia, a country heavily exposed to trade with China, dropped 5 per cent, weighed down by miners. Japan’s Topix closed down 2.2 per cent, while markets in mainland China, Hong Kong and South Korea were closed for public holidays.

The cautious sentiment rippled through other EM currencies, sending the beleaguered South African rand 1.4 per cent lower and the Mexican peso down 1.2 per cent. The Turkish lira fell through the important TL7 level as it weakened 0.6 per cent.

Japanese stocks were under pressure after purchasing managers’ index data for April signalled the sharpest drop in the country since 2009, as the pandemic triggered factory shutdowns and a collapse in demand.

There was a rare moment of relative stability in oil markets, though. International benchmark Brent fell 1.5 per cent to $26.10 a barrel, while US marker West Texas Intermediate dipped 1.2 per cent to $18.60.