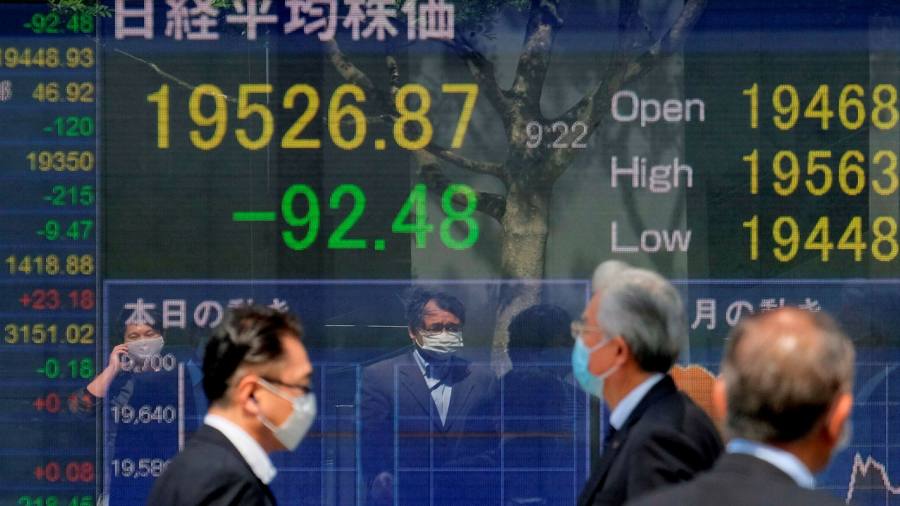 Global stocks slipped as a resurgence in coronavirus infections in parts of the US, Europe and China weighed on investor sentiment.

In early Asia-Pacific trading on Monday, Hong Kong’s Hang Seng was down 0.4 per cent while stock benchmarks in Tokyo, Sydney and Seoul each slipped 0.1 per cent. China’s CSI 300 index of Shanghai- and Shenzhen-listed stocks edged up 0.4 per cent.

Investor sentiment in recent sessions has been damped by a surge in new Covid-19 cases in the Americas, Europe and Asia after early successes in lifting lockdowns in these economies.

The US reported 27,465 new infections as of the end of Sunday with a recent jump in infections in the southern and western parts of the country showing little sign of slowing down.

On Friday, the S&P 500 erased early gains to close down 0.6 per cent after Apple said it would temporarily close stores in US states including Arizona and Florida due to rising virus cases.

Futures markets tipped the FTSE 100 to shed 0.8 per cent and the Euro Stoxx 50 was on course to fall 1.2 per cent when trading begins later on Monday, though the S&P 500 was expected to rise 0.3 per cent.

Chinese officials have also been attempting to control an outbreak in Beijing, where there were nine new cases reported as of the end of Sunday, down from 22 a day earlier. Meanwhile, some coronavirus restrictions have been reintroduced in the Australian state of Victoria following an uptick in cases.

However, strategists at Morgan Stanley said on Monday that China’s decision to lock down parts of the capital to contain the latest outbreak “may prove to be a better response for the purposes of economic growth over the medium term”.

“Quick, decisive action to contain hotspots is likely to feed into greater consumer confidence over time,” they added. “It should allow businesses to remain open for longer, for a given period of time, than the alternative.”

Oil prices continued to climb after a solid week in which Brent crude, the international benchmark, settled above $42 a barrel. On Monday Brent was up 0.5 per cent at $42.38 a barrel while US marker West Texas Intermediate rose 0.3 per cent to $39.87.

Warren Patterson, head of commodities strategy at ING, said a higher demand forecast from the International Energy Agency, along with new evidence of more consistent output cuts from Opec countries, “appear at the moment to be outweighing worries over the outbreak of Covid-19 in Beijing”.