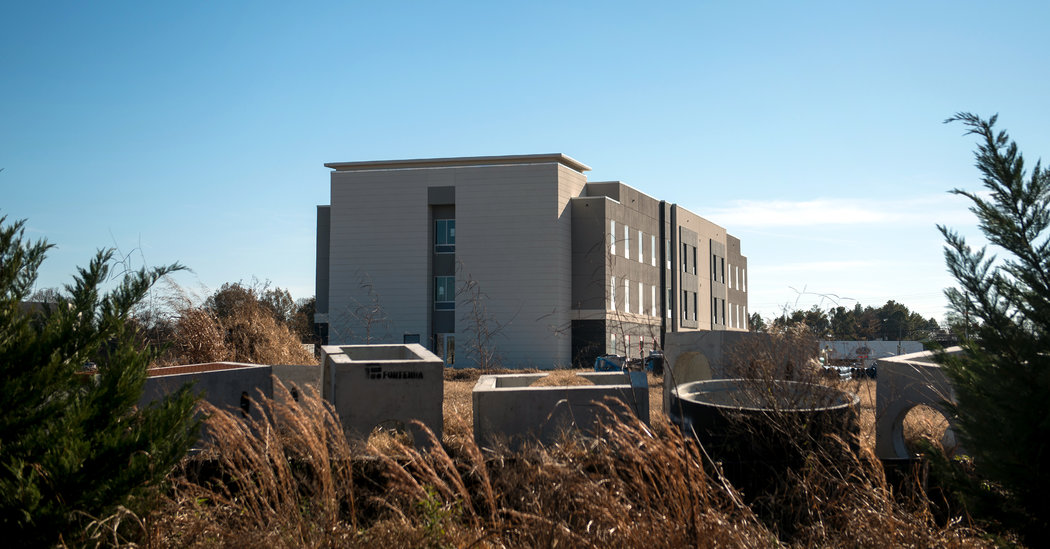 When President Trump was campaigning in 2016, his company announced a new line of bespoke hotels that would be built with partners across the country. But two years into his presidency, the Trump Organization shelved the brand and dropped the only partner, a Mississippi family business that one member says lost about $2 million in the collaboration.

Now the former partner is preparing to open the hotel in Cleveland, Miss. — without the Trump brand, but with a Trump assist.

Donning orange gloves and a white mask, the hotelier, Dinesh Chawla, visited a local bank last month to sign a stack of papers locking in about $250,000 in loans through the Trump administration’s paycheck protection program. The loans, intended for businesses hit hard by the pandemic, are backed by the Small Business Administration and can be forgiven if Mr. Chawla puts most of it toward paying employees.

In a telephone interview, Mr. Chawla said nearly $50,000 of the money would go toward the property that was once intended to be the Trumps’ first hotel under a new Scion brand. There is no indication that he called in a favor to qualify for the program, which has frustrated numerous other businesses that could not obtain the financing, even though they appeared to qualify.

“From the standpoint of somebody throwing you a ring buoy in the middle of the ocean, I thought it was a well-designed and -pointed program,” said Mr. Chawla, who owns several other hotels in the Mississippi Delta. The money has helped him keep employees on the payroll, he said, “and that helped me sleep at night.”

For Mr. Chawla, who also obtained about $25,000 from an S.B.A. disaster relief fund, the experience brought his family’s unlikely decades long relationship with the Trumps full circle.

It was Mr. Trump the businessman who returned an out-of-the-blue phone call in the 1980s from Mr. Chawla’s father, an Indian refugee. Mr. Trump suggested V.K. Chawla seek a loan from the S.B.A., advice the elder Mr. Chawla credited with jump-starting the family’s hotel business.

“There’s some irony in that,” he said.

Mr. Chawla explained that the government money was not keeping his business afloat. But it was necessary to avoid layoffs at his existing hotels in the area — a Hampton Inn, a Quality Inn, and a Holiday Inn Express — as well as the former Scion property. He said he also has a partial stake in other hotels that received about $100,000 in S.B.A. funding, and he recently received word from the agency that he might qualify for additional loans up to $250,000.

To date, Mr. Chawla is the rare Trump family business associate, past or present, to acknowledge tapping federal funding for the pandemic. A dozen other businesses contacted by The New York Times, including restaurants in Trump hotels and tenants in the president’s various properties, denied participating in the S.B.A. program, declined to discuss the subject or did not respond. Suresh Chawla, formerly a partner with his brother in the Mississippi hotel, did not respond.

A spokeswoman for the Trump Organization also did not respond to a request for comment.

The S.B.A. has failed to make public the list of recipients. Some public companies have disclosed the loans in regulatory filings, fueling criticism of the program, which has been dogged by technical glitches and concerns that large businesses jumped the line. Some of them later returned the money after the Trump administration both provided new guidance and threatened repercussions.

As a local hotelier, Mr. Chawla is the sort of small business owner intended for the program. In a Facebook post, he praised the government officials that had made it happen.

“I’m delighted to report that not a single employee will be laid off, and when the new hotel gets the greenlight to open, the company will be adding even more employees to the rolls,” he wrote.

Mr. Chawla briefly worried he would not qualify for the S.B.A. program, which is not available to anyone on probation or parole. In August, he was arrested in Memphis on felony charges that he stole luggage from an airport baggage claim area. Prosecutors eventually dropped the case, and Mr. Chawla acknowledged in an interview that he had used bad judgment and sought counseling.

Since the case concluded in November, Mr. Chawla has been focused on completing the new development. The $27 million property will include a hotel — known as the Lyric instead of Scion — as well as restaurants and a music venue.

The development was initially expected to open in fall 2018, but the Trumps extended the timeline as they sought to redesign the meeting spaces and spruce up the clubhouse. Then early last year, Mr. Trump’s eldest sons, who oversee the family business, called off the deal, citing increasing scrutiny of their business from congressional Democrats and the media.

“I lost about $2 million in investment, lost business, interest, redesign and increased construction costs because of the delays of the Trump period,” Mr. Chawla said. But he did not “feel that it was a total loss,” he added, as the Trumps offered helpful expertise.

“The Trump experience — with all of its ups and downs — was a life-changing one, and they were universally encouraging and instructive to me,” he said.

Before the pandemic, Mr. Chawla had hoped to open this spring. A partial opening is now planned for late June.