Here’s How Wuhan Tested 6.5 Million for Coronavirus in Days 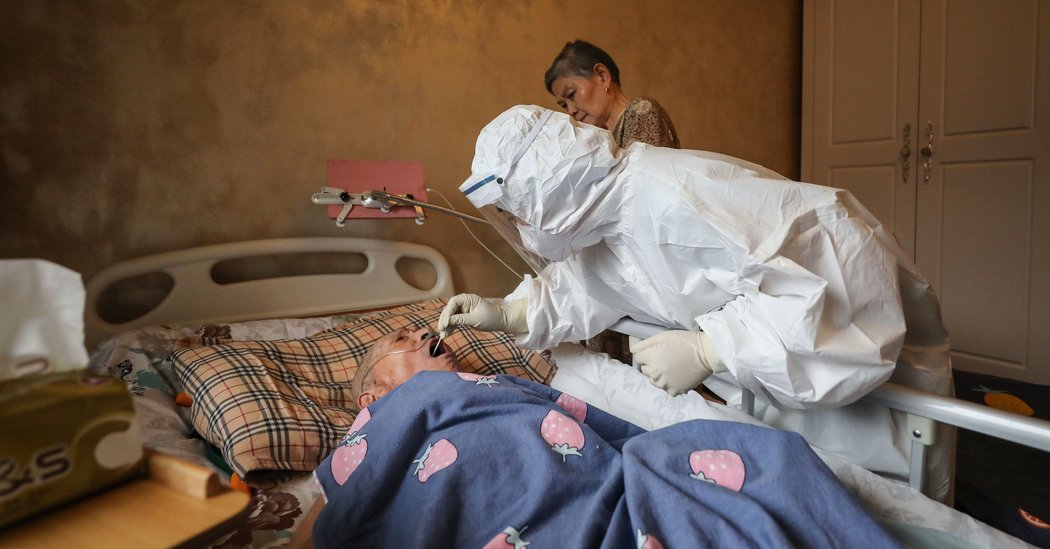 In Wuhan, medical workers armed with coronavirus test swabs scoured construction sites and markets to look for itinerant workers while others made house calls to reach older residents and people with disabilities. Officials aired announcements over loudspeakers urging people to sign up for their own good.

These are the front lines of an unprecedented campaign to screen virtually all 11 million people in Wuhan, the central Chinese city where the coronavirus pandemic began. Nearly two weeks in, the government is getting close to reaching its goal, with 6.5 million tested so far.

“Our community was checked in a day,” said Wang Yuan, a 32-year-old resident who lined up under red tents near her home and had her throat swabbed by medical workers wearing protective suits and face shields. She expected to get her results within two to four days.

While other governments have struggled to provide testing for their populations on a broad scale, China has embarked on a citywide campaign to prevent a resurgence of infections at all costs. It has succeeded, according to residents and Chinese news reports, by mobilizing thousands of medical and other workers and spending hundreds of millions of dollars.

The government, which is covering the cost of testing, sees the drive as key to restoring public confidence that is needed to help restart the economy and return to some level of normalcy. But public health experts disagree on whether such a resource-intensive push is necessary when infections are low.

The drive — which has reached more than 90 percent of the city after taking into account people who had been recently tested and children — has largely confirmed that Wuhan has tamed the outbreak. By Tuesday, only around 200 cases were found, mostly people who showed no symptoms, though samples were still being processed.

The city has ramped up its testing capacity over the past two weeks, in sharp contrast with the early weeks of the outbreak when the government struggled to find enough testing kits. Lab technicians were able to speed up the process by pooling samples together to be tested in batches.

Laboratories went from processing around 46,000 tests a day, on average, before the drive, to as many as 1.47 million tests on Friday. By comparison, the state of New York has tested 1.7 million people since March 4, according to The Atlantic’s COVID Tracking Project.

The Wuhan government is determined to leave no person behind. Officials, ordered to “check the leaks and fill the gaps,” also went from door to door to register residents and usher them to nearby testing stations. In at least one neighborhood, officials warned in public announcements that residents who refused to get tested would see their government-issued health codes downgraded, potentially limiting a person’s right to work and travel.

“If you do not participate, you will not be allowed to enter supermarkets or banks,” the announcement said. “Your green code will turn yellow, which will cause inconvenience to your life.”

The Wuhan government had urged the “small number of residents” who had still not submitted to testing to sign up for it before 5 p.m. on Tuesday. People were warned that if they did not do so before the deadline, they would have to pay to get tested in the future.

Many residents appeared to be supportive of the tests. But in a city where nearly everyone knew someone who was infected or died, there was also resistance and fear.

Herry Tu, a Wuhan resident, refused for days to sign up for a testing slot, despite the urging of officials from his neighborhood. How would so many people safely gather, he asked, while maintaining two meters of separation? Would the medical workers really change gear between each person they tested?

“We’re totally opposed to it,” Mr. Tu said of his family. “Because, even if you weren’t infected to begin with, this testing just means contact.”

He ultimately agreed to be tested this past weekend, after his children’s school said they could not return to class without doing so. But he remained angry. “In reality, the government isn’t doing this for the benefit of the people,” he said. “It’s for the outside world to see.”

In the Hongshan district, more than 100 people waited in nearly 90-degree heat on May 18, said Zhou Chengcheng, a resident. But he declined to go.

“I felt it was a mere formality,” he said. “The scene looked quite chaotic, and it increases the risk of silent infections.”

The government sought to reassure that the testing drive would not be a source of infections. Each resident was given a time slot to avoid crowding. Testing was conducted in open spaces. Residents had to have their temperatures screened, wear masks and keep a distance from one another. Medical workers were required to change or disinfect their gloves after each test.

But with confirmed, symptomatic infections remaining in the single digits in Wuhan, some experts said the scale of Wuhan’s campaign was excessive. Jin Dongyan, a virologist at the University of Hong Kong, said it would be impossible to accurately test that many people in such a short period.

Under ordinary circumstances, nucleic acid tests for the coronavirus are difficult to administer in hospitals, even with well-trained nurses, Dr. Jin said. Trying to conduct so many of them, in quick succession, in makeshift testing tents, could produce many erroneous results.

There have also been questions about the reliability of China’s testing kits and reagents, with some countries complaining that the rush by Chinese manufacturers to meet surging global demand has led to faulty exports.

For a city of around 10 million, Dr. Jin said, a sample of about 100,000 people would have been more than sufficient. He called Wuhan’s campaign to expand testing to every Wuhan resident “kind of scary” because it would overwhelm medical staff.

Even the chief epidemiologist of China’s Center for Disease Control and Prevention, Wu Zunyou, has suggested that there is no need to test everyone in the city.

Batch testing involves combining a number of swabs from different people into a plastic tube to be analyzed using one test. A negative result means all the samples can be cleared, but if the batch comes back positive, medical workers can return to each person in the group to test them individually.

But it works only in places where there is a low prevalence of infections, researchers say. If the rate of infection is too high in a community, most of the groups would have to be retested, defeating the purpose of group testing.

The approach has been adopted elsewhere in places like Nebraska and the San Francisco Bay Area, though not at the same scale attempted in Wuhan. A district in Beijing announced this month that it would test teachers and students in batches of three in preparation for schools to reopen.

Proponents of the testing push say it would give health officials a more comprehensive view of the situation in Wuhan, including of people who are asymptomatic. The campaign was initiated after the authorities discovered six infections following a month of no new confirmed cases.

Some supporters of the testing drive acknowledged that the true value of the campaign was not so much medical as psychological. While comprehensive testing would be expensive, the price of a paralyzed economy would be much higher, Guo Guangchang, the head of Fosun, a major Chinese conglomerate, told the Chinese media.

“If there is no testing, everyone will still be scared,” Mr. Guo said. “Many companies will have no way to resume production, and the service industry will have no customers.”

The loss in one day from the shutdowns in production and the service industry could be 6 billion yuan, or about $844 million, in Wuhan, he said.

Yang Zhanqiu, a virologist at Wuhan University, said he hoped that with citywide testing, more people would feel comfortable going out.

“This push to test everyone would improve the vitality of the city and provide a scientific basis for the resumption of work,” Dr. Yang said. “It can also make people feel at ease and give everyone some peace of mind.”