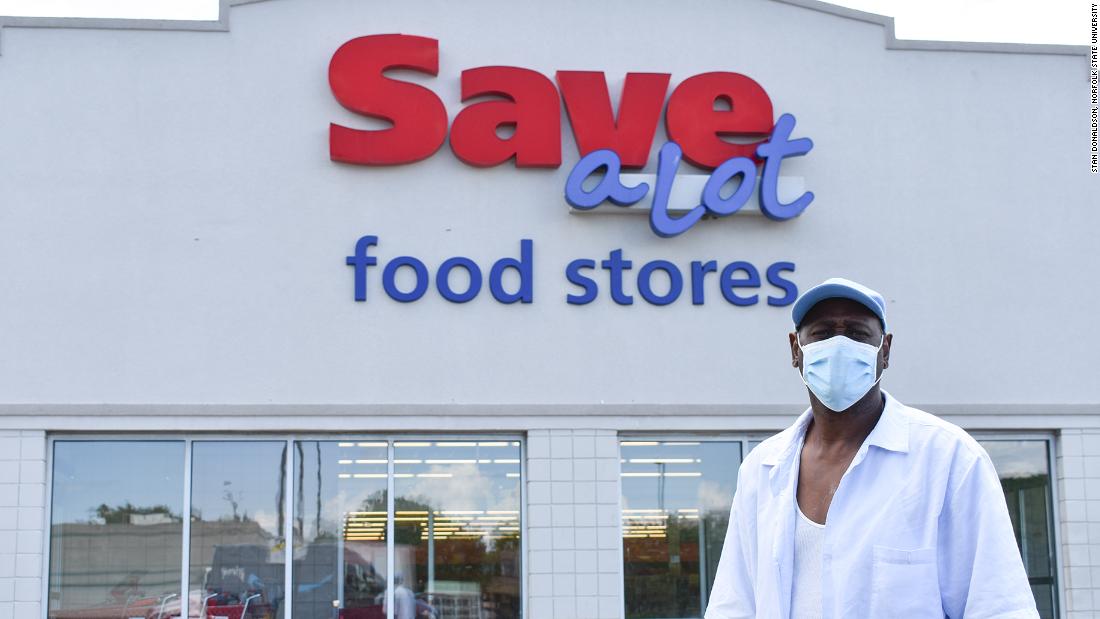 That changed last month when Save A Lot, the only grocery store within a mile from Rayeford, closed its doors in the middle of a pandemic.

Rayeford, 30, says she felt abandoned. “It’s the worst time for this to happen,” she said. Without a car and unable to afford taxi fare, she now has to ask relatives and friends to drive her to pick up groceries. At a time when people want to limit their contact with others, she added, that’s an especially tough ask.

Rayeford and residents in the St. Paul’s neighborhood, more than half of whom are unemployed, are living in what the Agriculture Department defines as a “low income and low access area” — one where a “significant” portion of the population lives more than a mile from the nearest supermarket or grocery store in urban areas. These areas are commonly known as food deserts, although the term has no official meaning.

In 2015, an estimated 39 million people, or 12.8% of the US population, lived in such an area, according to the USDA. There is also a racial divide in food access: Research from the Johns Hopkins School of Nursing in 2014 found that lower-income minority neighborhoods have less access to grocery stores compared with similar white neighborhoods.

Rayeford worries she will have to shop more at Family Dollar, where “you can’t get your vegetables.”

Aldi is 1.9 miles away from the closed Save A Lot, Food Lion is 2.2 miles away and Walmart is 2.4 miles. While Harris Teeter is a little closer, it’s still about a 30-minute walk and is more expensive. These distances may not seem too far, but transportation is a barrier for Rayeford and the majority of residents in the area. More than half of households within a half-mile of the Save A Lot lack access to a car, according to the city. In a quarter-mile radius of the store, 61% of households don’t have a car.

Save A Lot opened in 2015 after another grocery store closed. The city recruited the grocer to help fill an access gap, and the store was often crowded, residents say. Its closure creates an even bigger need for healthy and affordable fruit, vegetables and meat in the neighborhood.

“Fresh food and produce are already costly and sometimes hard to come by” for St. Paul’s residents, said Dr. Henri Parson, associate professor at Eastern Virginia Medical School in Norfolk. “With the additional burden of distant grocery stores that require transportation, this becomes even harder and adds additional stressors, which diminish quality of life.”

Norfolk city officials, community activists and local residents heard rumors for months that the store might close. But they say they were caught off guard by the timing of the announcement in June and were not prepared to handle the consequences of losing the neighborhood’s only source of fresh food in the middle of a public health disaster.

“Save A Lot gave us no heads up,” said Angelia Williams Graves, who represents the area in the Norfolk City Council. “I had a notice sent to me on my social media page. I’m frustrated that they did not at least give us the opportunity to at least come to the table and work with them.”

Save A Lot did not respond to Graves’ claim, but said in a statement, “We take the decision to close any Save A Lot location very seriously. We regularly review our stores on a number of factors, including financial performance as well as strategic alignment with long-term plans. Unfortunately, as a result of this review, we closed our store.”

In the St. Paul’s area, which is comprised of three public housing projects, 98% of the more than 4,100 residents are Black and the average income is under $12,000. Life expectancy for residents in St. Paul is more than 15 years lower in the area than for people living in the adjacent downtown Norfolk area, according to the city.
Residents and local leaders say the loss of Save A Lot must be understood within this context. Some point to the fact that the wealthier, largely white neighborhood nearby has three grocery stores within a mile.

Black people “will be disproportionately impacted by having this new food desert in our community, and we can’t ignore that reality,” said Ruth Jones Nichols, president and CEO of the Foodbank of Southeastern Virginia and the Eastern Shore, located across the street from the St. Paul’s area. “This isn’t just a food access or social justice issue. It really is a racial justice issue.”
Hanging over Save A Lot’s absence is a revitalization project that will upend the neighborhood.
The city has approved a $1 billion redevelopment plan that will tear down the public housing units and build a new mixed-income, mixed-use neighborhood with parks, retail and other amenities. The project, which will take up to twenty years, has already started and more than 200 residents in the community have had to relocate so far. They are given housing vouchers to either rent within the private market anywhere in the United States that accepts vouchers or relocate to another public housing community in Norfolk, according to the Norfolk Redevelopment and Housing Authority. Proponents of the redevelopment plan say it will “break the cycle of intergenerational poverty.”
Earlier this year, a group of residents sued the city, the city housing authority and the Department of Housing and Urban Development, which provided a $30 million grant to help fund the revitalization, in federal court to block the plan. They say it violates the Fair Housing Act.

The lone grocery store in the area shutting down adds yet another layer of anxiety for the community.

“You already are in a community going through a gentrification process and stressed out, and then you take away the food. I don’t even know what will happen next,” said Deirdre Love, a local activist and executive director of Teens with a Purpose, a youth development organization.

“Food?” she asked, her voice rising. She repeated the question three times. “Really?”

Rayeford has not been given a move out date yet, but she said she is overwhelmed by the idea of leaving and doesn’t know where she would go. She fears she won’t be able to afford returning to the new mixed-income community.

Save A Lot faced challenges in St. Paul’s.

There was “relatively low spend potential” in the area, and Save A Lot faced stiffer competition in surrounding neighborhoods, according to Neil Stern, senior partner at retail consulting firm McMillanDoolittle.

However, the closure is a “lost opportunity for Norfolk and community residents,” said Stacey Sutton, assistant professor of urban planning at the University of Illinois at Chicago who studies race and gentrification. “This could have been an opportunity to convert this establishment into a worker-owned grocery store,” she said. “Not only would it have retained jobs, it would have supported community wealth building.”

City officials and community advocates say they are discussing both short-term and long-term answers to replace the Save A Lot.

The city has added bus lines to go from the St. Paul’s area to another grocery store, said Norfolk City Manager Chip Filer. But the coronavirus outbreak makes public transportation riskier, especially for older residents and those with health risks.

“It’s a tough time for this type of event,” said Filer. “What makes it acutely difficult is that the obvious short run solution is public transportation, and that is complicated by the existence of the virus.”

Additionally, the pandemic and recession have strained city and state budgets, leaving officials less equipped to respond to the closure.

The city is already cutting staff and programs and will “likely to have to do [so] again in the coming months if there is not a sharp rebound in economic activity and tax collections,” said Robert McNab, professor of economics at Old Dominion University in Norfolk. Even if coronavirus cases decline in the state, “the question is whether Norfolk will have the financial and staff resources to address the residents’ concerns.”

Still, Save A Lot closing has pushed the community to rally together.
Community leaders and residents have formed a group, the Community Food Disparities Coalition, to “find immediate solutions to the food desert.” On Saturday, the group organized a “mobile food market” to provide free groceries to residents in the area, relying on food donations. The group got a bus and made grocery deliveries in the area. More than 80 volunteers turned up. So did Norfolk’s mayor.

Jones Nichols from the Foodbank of Southeastern Virginia and the Eastern Shore said her organization is stepping up its efforts with private and public partners to increase food distribution in the area.

Norfolk’s economic development department is “actively seeking potential grocers,” a spokesperson for the city said. And some leaders are thinking outside of trying to replace Save A Lot with another national chain.

Among the concepts that leaders have been discussing are “food hubs,” which allow local farmers to distribute fresh produce and other items. A city-owned store or a grocery cooperative may also be a long-term answer.

In other areas where grocery stores have closed, Jones Nichols said, dollar stores have filled the gap, but they have not offered fresh produce or many healthy options. She hopes that will not happen in St. Paul’s and that the Save A Lot closing will be a chance to address systemic health and racial disparities in the community.

Added Graves from the City Council: “Black Lives Matter doesn’t just matter when Black people get shot by police. It matters what they eat. Their health care matters.”