Hollywood Beacons in the Night 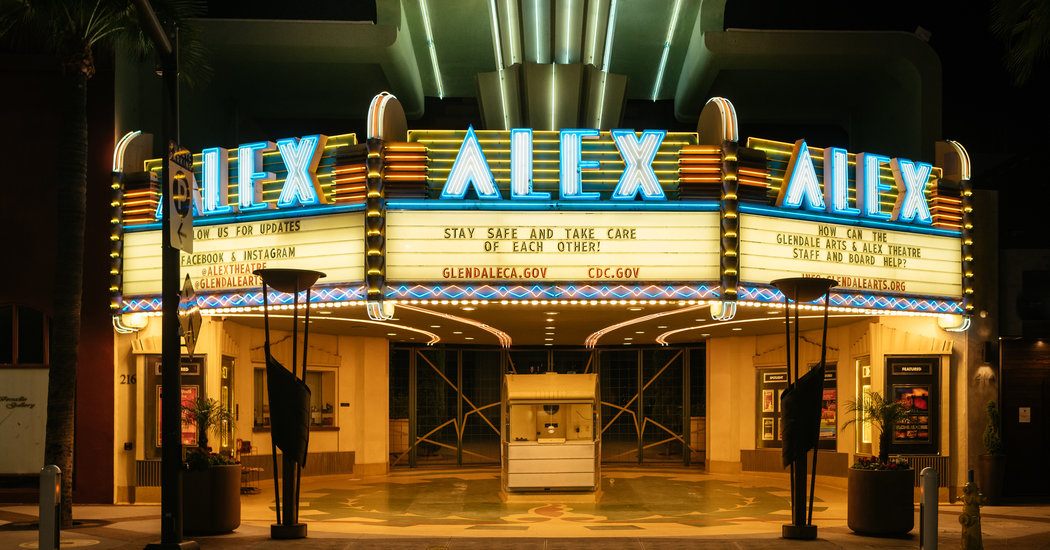 LOS ANGELES — They survived the Great Depression, when tickets cost a dime. Neither earthquake nor greedy developer has been able to topple them. Over the decades, they have endured the rise of the VCR and the indignity of showing “Cats.”

But the coronavirus pandemic — so far — has outmatched the remaining movie palaces of Los Angeles, at least one of which, the 93-year-old Chinese Theater, with its towering red columns and swashbuckling copper pagoda, stands as a global symbol of Hollywood.

All have been closed for more than a month, along with every other movie theater in the United States: 5,548 cinemas sitting eerily vacant, with only guesses (June? July? August?) as to when projectors might flicker back to life.

Hollywood still believes in the magic of watching movies in the dark with strangers.

“Communal experience is part of who we are as human beings,” said Thomas E. Rothman, chairman of Sony’s film division. “It’s primal. And people are going to come out on the other side of this with a greater appreciation for it. I am unwavering on this.”

In the meantime, vintage theaters across Los Angeles — marquee-bearing monuments to the romance of the movies — await their fate in silence. A few stand as hardened survivors of upheavals past, having turned to live music to pay the bills when cinema would not. Some seem fragile, bundled up against an unseen menace. Others are defiant: Go ahead and try to dim me.

A dewy-eyed tramp (Charlie Chaplin) fell in love with a blind flower girl (Virginia Cherrill) on the night the Los Angeles Theater opened in 1931. Hosting the premiere of “City Lights” was an appropriate initiation for the Los Angeles, which was designed to drip sophistication: French Baroque architecture, a Versailles-esque mirrored lobby, blue neon floor lights. The theater, like the nearby Orpheum, which has a Beaux-Arts facade, still plays the occasional film but has mostly become a concert venue.

Built in 1963, when cinema owners worried that TV sets would make theaters irrelevant, the 800-seat Cinerama Dome has an 86-foot-long, deeply curved screen — enough to fill your peripheral vision. The theater, which squats on Sunset Boulevard in the heart of Hollywood, is usually a madhouse. It hosts red-carpet premieres and specializes in blockbusters.

The poor Wiltern has had a harder life.

It opened to moviegoers in 1931 as the Warner Brothers Western Theater and spent its early years as a Hollywood postcard: Clark Gable and Joan Crawford arriving for premieres, searchlights stabbing the sky from the terrazzo entryway. But new owners — renaming it the Wiltern, a portmanteau of the streets it faces (Wilshire and Western in what is now Koreatown) — failed to maintain its blue-green facade and ornate Art Deco interior.

It was almost demolished twice in the 1970s. It was refurbished in the 1980s and now hosts indie rock bands.

The long-defunct Crest — the Majestic Crest, as it was formally called — haunts Westwood Village, almost like a scene from a noir film. Not alive. But not quite dead. Waiting for someone to turn back time. The University of California, Los Angeles, bought the 79-year-old Crest in 2018 with funding from Susan Bay Nimoy in honor of her husband, the actor Leonard Nimoy, who died in 2015. The university hopes to reopen the theater in 2022 as a performing arts space.

Along the famed Sunset Strip, the marquee of the Roxy music club borrowed a message from the movies. “Touch-A, Touch-A, Touch Me,” as Susan Sarandon lustfully sings in “The Rocky Horror Picture Show” (1975), was rewritten for the coronavirus age.

Similar handiwork on theater marquees elsewhere include “No Close Encounters of Any Kind” and “We’re Gonna Need a Bigger Boat.”

Quentin Tarantino bought the Beverly in 2007 to save it from bulldozers. Since then, the 225-seat theater has become an essential outpost for cinephiles, showing classics — “The Bitter Tea of General Yen,” a Barbara Stanwyck vehicle from 1933, was a recent offering — and the occasional new release. Mr. Tarantino’s “Once Upon a Time … in Hollywood” had 55 consecutive sold-out screenings last summer.

Other time machines in the area include the 163-seat Fairfax, which reopened in December with “Uncut Gems” and a green squiggle of neon after being closed for two years; it previously showed silent films and had sofas for seats.

Foreign films and documentaries are specialties at the Music Hall, which traded hands last year. It opened in 1937.

We miss you, too. The Hayworth’s decades-long career as a movie house ended in 1985, when it was showing classics. “The taping of old movies off television killed me,” the owner at the time, Tom Cooper, told The Los Angeles Times. Named after Rita Hayworth, the theater hosted an evangelical church for a while. Most recently, it has been a comedy clubhouse.

That leaves the grande dame of Los Angeles cinemas, the TCL Chinese Theater Imax (to use its decidedly unglamorous formal name, born of a branding deal). Tourists typically clog its courtyard, where the handprints of Hollywood legends are preserved in concrete.

The 932-seat Chinese, which opened in 1927 with Cecil B. DeMille’s “The King of Kings,” remains Hollywood’s pre-eminent premiere venue. It’s where “Star Wars” fans camp out overnight every time a new installment arrives. It’s where models in bikinis danced atop muscle cars to signify the arrival of “Furious 7.”

It’s where, for more than nine decades, movies have entertained, educated and inspired. And where, some day, they will again.