Hoping to Buy an Aboveground Pool to Salvage Summer? It May Be Too Late. 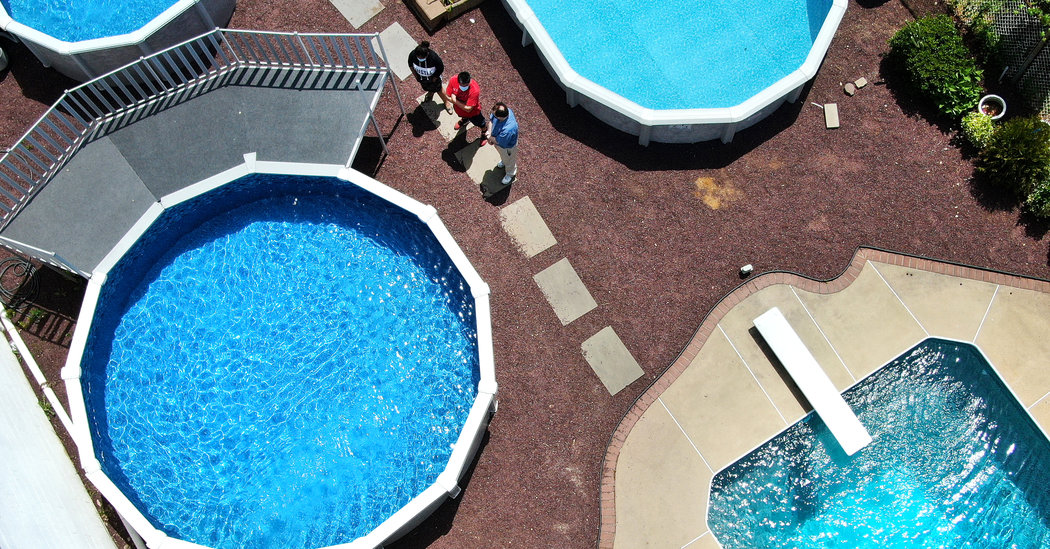 A store near Hartford, Conn., just sold its last aboveground pool. The owner said he could easily sell 100 more.

Sand, a material crucial for erecting pools on a smooth and level surface, is hard to keep in stock for more than a few hours at one bulk supply company in New Jersey.

Casey Freeman, a nurse in Nashville who made a do-it-yourself video about how to create a pool out of a stock tank — commonly used as a water trough for cattle — has been deluged by requests for material and help with installation.

“People in New York City can’t understand why they can’t find a 10-foot tank,” said Ms. Freeman, 39. “And I ask them: Are there cattle ranchers near you? And they just don’t understand.”

Staring down the barrel of a long, hot summer — with vacations on hold and many camps, playgrounds and public pools closed because of the coronavirus — homeowners are hunting for creative ways to stay cool, active and sane.

For some, not having to pay for camps or vacations means more money to spend on other things.

Landscapers and retailers say sales of gardening soil, mulch and firewood — for fire pits — are soaring. Trampolines are hard to come by. And swing sets at one large Long Island distributor that has been taking orders online and by phone, Backyard Solutions, have been out of stock since March.

“People are just getting their names on the list and throwing down 25 percent and hoping to get it by August,” said Melissa Smith, a sales representative for the swing set distributor. “If we had someone here 24 hours, I guarantee they would sell all day and all night.”

And then there are the pools.

High-end in-ground varieties remain in demand among homeowners with deep pockets and the luxury to wait months for permits and construction.

But it is the aboveground versions that are the hottest items at many pool stores, both because of their relative affordability and ease of installation.

Of course, in a country where 40 million workers have filed unemployment claims since mid-March, even low-priced pools are well out of reach for the many people struggling to pay rent and grocery bills. A pool is decidedly not a perk for everyone.

And they are a mere fantasy for those living in cramped apartments. Aboveground pools require ample space, which make them more viable for suburban and rural homeowners, who are driving the frenzied market.

“Sales are up exponentially,” said Steven Metz, president of Central Jersey Pools in Freehold. “Triple what it was last year.”

The wait time for purchase and installation is now stretching into July, he said, and calls are coming in from as far away as Wisconsin. One woman asked the store to overnight a pool to Long Island.

Prices for metal-frame pools, including installation, can range from about $3,500 to $15,000, Mr. Metz said, depending on size and sophistication. (Some can be sunken partially into the ground with built-in steps, for example, much like in-ground pools.)

“You skip your vacation, you can pay for your pool,” said Paul Healy, the owner of Splash Pool Supply in South Windsor, Conn., who sold his last remaining aboveground pool last Wednesday. “If I had a crystal ball, I would have ordered a lot more.”

Since mid-April, Google searches for aboveground pools have climbed steadily, outpacing the number of inquiries each spring for the last five years by about 300 percent.

A man who answered the phone at Aquasports, a New Jersey pool manufacturer, said the company was “under siege.”

“It’s like the toilet paper and the water and the masks,” he said before declining to give his name.

Doughboy buys most of its parts in the United States. But it relies on electric motors sold by companies in Mexico and China to power its pool pumps, and Mr. Hollowell said orders were significantly backlogged.

Workers at his plant in West Helena, Ark., which is now operating 24 hours a day, seven days a week because of the increased demand, have had child care issues related to school and day care closures. “We’re begging for employees,” Mr. Hollowell said.

The factory for an even larger pool manufacturer, Wilbar International in Hauppauge, N.Y., has been closed as part of the governor’s shutdown order.

“We’re hoping and praying that they get back up quickly because it will relieve this crazy demand,” Mr. Hollowell said.

While the explosion in sales is certainly good for business, Mr. Hollowell said he worried about the added risk of drowning, and he urged parents to remain attentive. “The only way to prevent accidental drowning is constant adult supervision,” he said.

Jackie Dahrouge, a preschool teacher from Belmar, N.J., began her hunt for a backyard pool soon after the start of the coronavirus lockdown.

She found one online and began clearing space for the 12-by-24-foot pool that she considered a down payment on a happy summer in an unpredictable world. If beaches close because of crowds or a spike in virus cases, her 8-year-old daughter and her extended family would still have somewhere to swim, she figured.

Two weeks later, the store notified her the order could not be fulfilled.

“We called every pool store. All the way into New York,” said Ms. Dahrouge, who lives less than a mile from the beach. “I even called companies in California.”

She eventually found one on eBay — in Oklahoma. It was shipped by freight truck, and relatives and friends helped to set it up on Saturday.

She said her family paid for it with money that would have otherwise been spent on a springtime vacation to Tennessee, which was canceled.

Dominick Mondi, executive director of the Northeast Spa and Pool Association, said it was too early to put a precise value on the boom. But sales, he said, have been “considerably above pace for this time of year.”

Two weeks ago, Andriano Placencia and his wife, Cecilia Ordonez, purchased the house they had rented for 20 years in East Windsor, N.J. Mr. Placencia, 41, said he had long dreamed of owning a pool, and watching his two children and his grandchild swimming outside.

The virus convinced him that it was time to make good on that dream.

“The beaches are open, but I don’t like to go there as much,” Mr. Placencia, a floor installer, said as he shopped last week for a pool. “There’s more security in your house.”

Kathryn Garrecht, 71, had no plans to replace her pool after it was destroyed this winter by a falling tree.

Then the pandemic upended everything, and her four grandchildren — including a 3-year-old she babysits daily and a 14-year-old who is autistic — needed somewhere to play.

“You know, what with the Covid-19, going to the beach was a little sketchy,” she said. She ordered an 18-foot round pool in April, and it was installed in her backyard in Wall, N.J., several weeks ago.

The desire to make indoor and outdoor improvements is driving a nationwide uptick in sales at independent home supply and hardware stores, according to Dan Tratensek, vice president of the North American Retail Hardware Association. In a recent survey, nearly three quarters of its members reported an increase in sales during the pandemic.

At the Yard in Scotch Plains, N.J., which sells mulch, sand and firewood in bulk, sales are up by about 35 percent, according to an owner, Kenny Midrano. He hired five extra workers just to split logs.

In early May, Joe Colangelo, chief executive of Boxcar, an app-based parking and transportation company, had a hunch.

“I bet pools aren’t going to open,” Mr. Colangelo said. “Let’s see what deals I can get on bulk prices.”

Boxcar’s revenue stream had evaporated in March when most commuters began working from home. The company pivoted, and is now arranging grocery pickups, organizing drive-in movie outings — and selling pools.

One buyer, Nancy Colacitti, 46, said she had tried to purchase a pool online for her two sons.

“All sold out,” said Ms. Colacitti, of Cranford, N.J. Then she saw Boxcar’s promotion.

“And that was perfect,” she said. “We can stay safe at home, keeping the social distance. We are bringing the beach to us.”