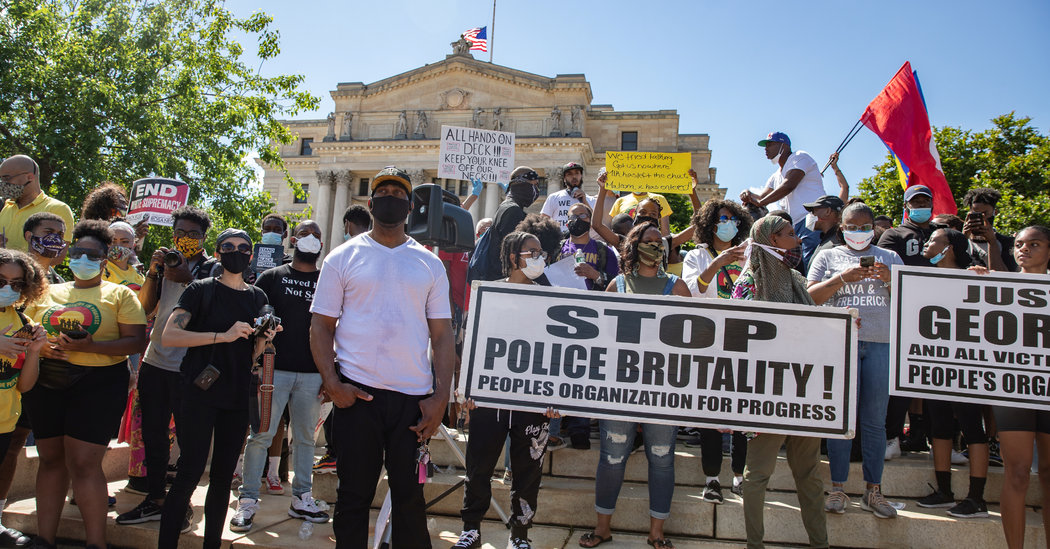 It was not until nightfall that the true test came.

After the structured march had ended, a crowd that the police estimated to be between 700 to 1,000 protesters moved toward the precinct on 17th Avenue.

The 320 members on duty from the Newark Police Department — which has lost four officers to Covid-19 and continues to struggle with coronavirus-related staffing issues — were “stretched,” Mr. Ambrose said.

At about 6:30 p.m., he placed a mutual-aid call asking for backup officers from the State Police, Jersey City, the Essex County Sheriff’s Office and nearly a dozen neighboring towns. Within hours, 280 officers from the region had arrived to help.

As a line of police officers stood at the front of the First Precinct wearing face shields and riot gear, members of the crowd threw bottles, shouted insults and attempted to move toward the door. One protester jumped on top of a squad car, and several police vehicle tires were slashed, but there were no arrests.

“It was a waiting game,” Mr. Ambrose said. “The police held them from going in, and the Newark community stood there and helped the police. And I am forever grateful to them for that.”

Newark, a city of 282,000, is about half African-American, 36 percent Hispanic and 10 percent white. Its police department, which remains bound to a federal consent decree linked to past abuses, is about 84 percent black or Hispanic, officials said.

A message eventually went out, spread by younger residents, that it was time for anyone who did not live in Newark to leave, according to clergy members, community leaders and police officials present during the standoff.