How Long Will Coronavirus Live on Surfaces or in the Air Around You? 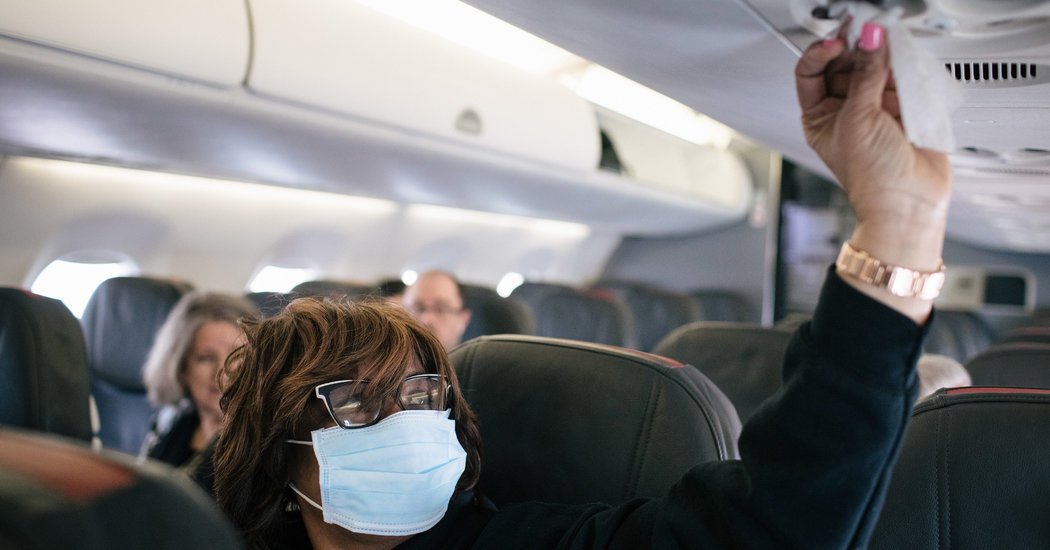 The coronavirus can live for three days on some surfaces, like plastic and steel, new research suggests. Experts say the risk of consumers getting infected from touching those materials is still low, although they offered additional warnings about how long the virus survives in air, which may have important implications for medical workers.

The new study, published Tuesday in the New England Journal of Medicine, also suggests that the virus disintegrates over the course of a day on cardboard, lessening the worry among consumers that deliveries will spread the virus during this period of staying and working from home.

When the virus becomes suspended in droplets smaller than 5 micrometers — known as aerosols — it can stay suspended for about a half-hour, researchers said, before drifting down and settling on surfaces where it can linger for hours. The finding on aerosol in particular is inconsistent with the World Health Organization’s position that the virus is not transported by air.

The virus lives longest on plastic and steel, surviving for up to 72 hours. But the amount of viable virus decreases sharply over this time. It also does poorly on copper, surviving four hours. On cardboard, it survives up to 24 hours, which suggests packages that arrive in the mail should have only low levels of the virus — unless the delivery person has coughed or sneezed on it or has handled it with contaminated hands.

“Everything at the grocery store and restaurant takeout containers and bags could in theory have infectious virus on them,” said Dr. Linsey Marr, who was not a member of the research team but is an expert in the transmission of viruses by aerosol at Virginia Tech in Blacksburg. “We could go crazy discussing these ‘what-ifs’ because everyone is a potential source, so we have to focus on the biggest risks.”

If people are concerned about the risk, they could wipe down packages with disinfectant wipes and wash their hands, she said.

It is unclear why cardboard should be a less hospitable environment for the virus than plastic or steel, but it may be explained by the absorbency or fibrous quality of the packaging compared with the other surfaces.

That the virus can survive and stay infectious in aerosols is also important for health care workers.

For weeks experts have maintained that the virus is not airborne. But in fact, it can travel through the air and stay suspended for that period of about a half-hour.

The virus does not linger in the air at high enough levels to be a risk to most people who are not physically near an infected person. But the procedures health care workers use to care for infected patients are likely to generate aerosols.

“Once you get a patient in with severe pneumonia, the patients need to be intubated,” said Dr. Vincent Munster, a virologist at the National Institute of Allergy and Infectious Diseases who led the study. “All these handlings might generate aerosols and droplets.”

Health care workers might also collect those tiny droplets and larger ones on their protective gear when working with infected patients. They might resuspend these big and small droplets into the air when they take off this protective gear and become exposed to the virus then, Dr. Marr cautioned.

A study that is being reviewed by experts bears out this fear. And another study, published March 4 in JAMA, also indicates that the virus is transported by air. That study, based in Singapore, found the virus on a ventilator in the hospital room of an infected patient, where it could only have reached via the air.

Dr. Marr said the World Health Organization has so far referred to the virus as not airborne, but that health care workers should wear gear, including respirator masks, assuming that it is.

“Based on aerosol science and recent findings on flu virus,” she said, “surgical masks are probably insufficient.”

Dr. Marr said based on physics, an aerosol released at a height of about six feet would fall to the ground after 34 minutes. The findings should not cause the general public to panic, however, because the virus disperses quickly in the air.

“It sounds scary,” she said, “but unless you’re close to someone, the amount you’ve been exposed to is very low.”

Dr. Marr compared this to cigarette smoke or a foggy breath on a frosty day. The closer and sooner another person is to the exhaled smoke or breath, the more of a whiff they might catch; for anyone farther than a few feet away, there is too little of the virus in the air to be any danger.

To assess the ability of the virus to survive in the air, the researchers created what Dr. Munster described as “bizarre experiments done under very ideal controllable experimental conditions.” They used a rotating drum to suspend the aerosols, and provided temperature and humidity levels that closely mimic hospital conditions.

In this setup, the virus survived and stayed infectious for up to three hours, but its ability to infect drops sharply over this time, he said.

He said the aerosols might only stay aloft for about 10 minutes, but Dr. Marr disagreed with that assessment, and said they could stay in the air for three times longer. She also said that the experimental setup might be less comfortable for the virus than a real-life setting.

For example, she said, the researchers used a relative humidity of 65 percent. “Many, but not all viruses, have shown that they survive worst at this level of humidity,” she said. They do best at lower or much higher humidity. The humidity in a heated house is less than 40 percent, “at which the virus might survive even longer,” she said.

Mucus and respiratory fluids might also allow the virus to survive longer than the laboratory fluids the researchers used for their experiments.

Other experts said the paper’s findings illustrate the urgent need for more information about the virus’ ability to survive in aerosols, and under different conditions.

“We need more experiments like this, in particular, extending the experimental sampling time for aerosolized virus beyond three hours and testing survival under different temperature and humidity conditions,” said Dr. Jeffrey Shaman, an environmental health sciences expert at Columbia University.

Dr. Munster noted that, overall, the new coronavirus seems no more capable of surviving for long periods than its close cousins SARS and MERS, which caused previous epidemics. That suggests there are other reasons, such as transmission by people who don’t have symptoms, for its ability to cause a pandemic.