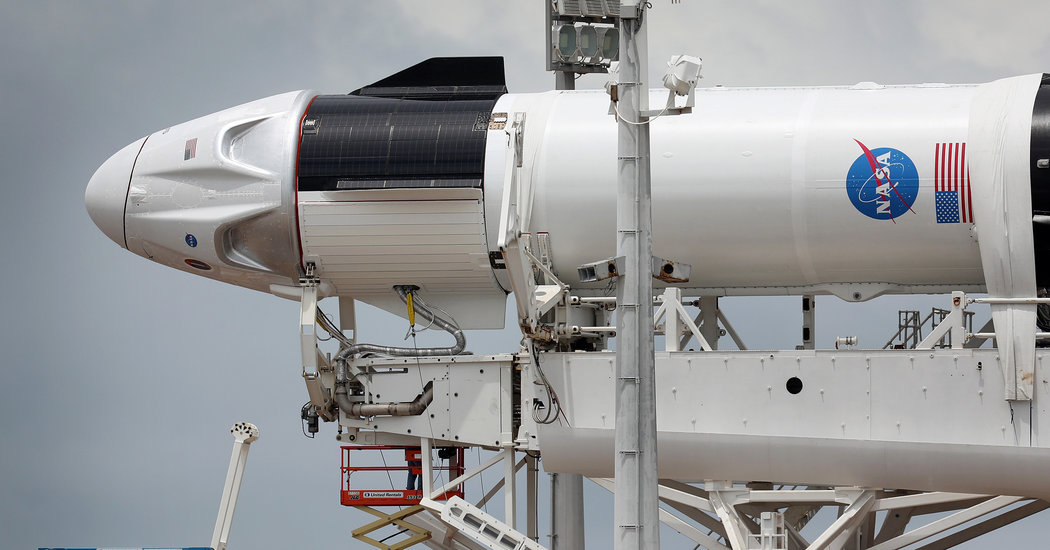 It took work across three presidencies, those of George W. Bush, Barack Obama and Donald J. Trump, but the United States is at last prepared once again, after nearly a decade, to launch American astronauts into orbit from American soil on an American-built rocket.

“This is a unique moment where all of America can take a moment and look at our country do something stunning again,” Jim Bridenstine, NASA’s administrator, said during a news conference on Tuesday.

Lori Garver, who served as NASA’s deputy administrator during the Obama administration, said in an interview that she hoped this moment would have come sooner. But she also said she was “really pleased with how, even in the pandemic, much attention and excitement there is for it.”

The replacement that the American space program finally settled on is an innovation not of technology, but philosophy and policy.

Instead of building its own replacement for the shuttle, NASA is handing over responsibility for carrying astronauts to a private company, SpaceX, one of the obsessions of the serial entrepreneur Elon Musk. If Mr. Musk’s engineers succeed on Wednesday in sending Douglas G. Hurley and Robert L. Behnken to orbit, it will forever change how the world thinks about getting people to space.

If a private company can loft humans to orbit today, why not the moon next or Mars some decades in the future? A successful launch could ignite a future long imagined by science fiction writers in which space is a destination for more and more people.

Almost everything about the journey to space scheduled on Wednesday is different from earlier eras of human spaceflight.

The launchpad at the Kennedy Space Center in Florida where the mission will blast off — the same one used by the last shuttle mission in 2011 — has been rebuilt to handle Mr. Musk’s Falcon 9 rocket.

Instead of riding to the spacecraft in Astrovan, a modified Airstream motor home that NASA used to transport shuttle crews, Mr. Hurley and Mr. Behnken will take a trip in a gull-winged Model X S.U.V., manufactured by Mr. Musk’s other major company, Tesla.

Wearing stylish SpaceX spacesuits, the two will walk across a sleek walkway about 230 feet above the ground to board the SpaceX-built capsule, which sits on top of the Falcon 9.

This launch will be the first time a private company and not a governmental space agency will be in charge of sending astronauts to orbit. Even though the passengers are still NASA astronauts, and the agency’s officials certainly could call off the launch if they saw something concerning, it is a SpaceX control room with SpaceX employees scanning the monitors who will be directing the launch.

“We’re really looking to be a customer to SpaceX, and to other companies, in the future,” said James Morhard, NASA’s deputy administrator. “That’s what we’re trying to do is to create an expanse, really expand the economy in low-Earth orbit. That’s really what this is about.”

Another proposal comes from Jeffrey P. Bezos, founder of Amazon and another billionaire with space dreams. Mr. Bezos’ rocket company, Blue Origin, is leading the development of Blue Moon, a lander that looks like a larger version of the lander used by NASA’s Apollo program in the 1960s and 1970s.

Boeing, the other company NASA selected to carry astronauts, stumbled in December during an uncrewed test of its spacecraft called Starliner. A software problem scuttled a planned docking at the International Space Station. An investigation revealed systemic problems with Boeing’s software development and testing, and questions about whether NASA was keeping a close enough eye on its contractors.

SpaceX has also encountered technical hurdles, including an explosion last year that destroyed one of its capsules during a test of the escape engines, and failures during parachute tests. But it was able to recover more quickly.

The transformation toward these commercial endeavors from NASA’s traditional ways has not always been easy for NASA and its astronauts.

A decade ago, the shuttle program was winding down. After Columbia disintegrated during re-entry because of a damaged wing in 2003, killing its crew of seven, President George W. Bush decided the remaining three shuttles were too complex and too dangerous. They were retired and sent to museums once construction of the International Space Station was complete.

NASA astronauts, however, had an ambitious program to look forward to. President Bush announced the goal of sending astronauts back to the moon — by 2020. As part of that program, called Constellation, NASA would also be developing a smaller rocket called Ares I that would be used for taking astronauts to and from the space station.

NASA then also planted the seeds of a commercial program, opening a competition for companies to send cargo to the International Space Station.

SpaceX was one of two companies that won contracts, which differed from the usual way NASA did business. Instead of reimbursing companies for their costs and adding a fee on top that provided profit, the cargo contract paid SpaceX predetermined amounts for meeting specific milestones.

SpaceX routinely launches and lands reusable rockets for numerous customers, and it has captured about 70 percent of the market. A decade ago, United States aerospace companies had lost almost all of the business of launching commercial satellites to competitors in countries such as Russia and China.

But before the company got involved with NASA, it nearly went out of business after failures of its first three attempts to launch its first rocket. The cargo contract it won in 2006 helped finance development of the Falcon 9, the rocket now used for launches, and Dragon, the cargo container that became the basis for the capsule that will carry NASA’s astronauts.

The company has now successfully launched 19 cargo missions for NASA and successfully bounced back from the one failure in 2015.

When the Obama administration took over in 2009, it liked the commercial cargo program but was wary of Constellation, which it feared was turning into a financial and technical quagmire. It shifted course, canceling the moon program started in the Bush administration.

For transportation to the space station, NASA started giving money to companies to start developing spacecraft that could carry astronauts to orbit. The program was called commercial crew.

Ms. Garver remembered talking to space shuttle crews after they returned to Earth, trying to explain the new direction.

Garrett Reisman was one of the NASA astronauts who was intrigued, so much that in 2011 he retired from NASA to work at SpaceX. He remembered the distrust that existed between the two organizations when he went back to the agency and presented SpaceX’s Crew Dragon plans to his former colleagues.

“I remember one particular guy saying, making very little effort to conceal himself or be discreet saying, ‘They’re going to kill somebody,’” said Mr. Reisman, who is now a professor at the University of Southern California and still consults for SpaceX. “I mean, easily within earshot of me as I was presenting.”

The Obama White House actually wanted to push faster and harder on commercial crew, and considered stashing a provision in the economic stimulus package that passed in 2009 that would have provided funding for it. But it was left out because of opposition from Congress and some top NASA officials.

“This would have been the place because, like now, those bills go through so fast and they’re so big, and nobody is looking,” Ms. Garver said. “I think we would have started the effort,” and that would have shortened the gap between the retirement of the shuttles and the advent of a replacement.

Instead, it took years of work under Charles F. Bolden Jr., President Obama’s NASA administrator before Mr. Bridenstine picked up the baton in the Trump administration.

Mr. Bolden “did just yeoman’s work in order to get this program off the ground to get it going. And here we are, all these years later, having this success,” Mr. Bridenstine said. “This is a program that demonstrates success when you have continuity of purpose going from one administration to the next.”

Today, nearly everyone in the space world backs the idea of private companies transporting astronauts to orbit. SpaceX, no longer a scrappy upstart outsider, is a behemoth in the rocket business and a core contributor to NASA.

“A lot has changed since then,” Mr. Reisman said. “And all for the good in my opinion.”