How Police Unions Became Such Powerful Opponents to Reform Efforts 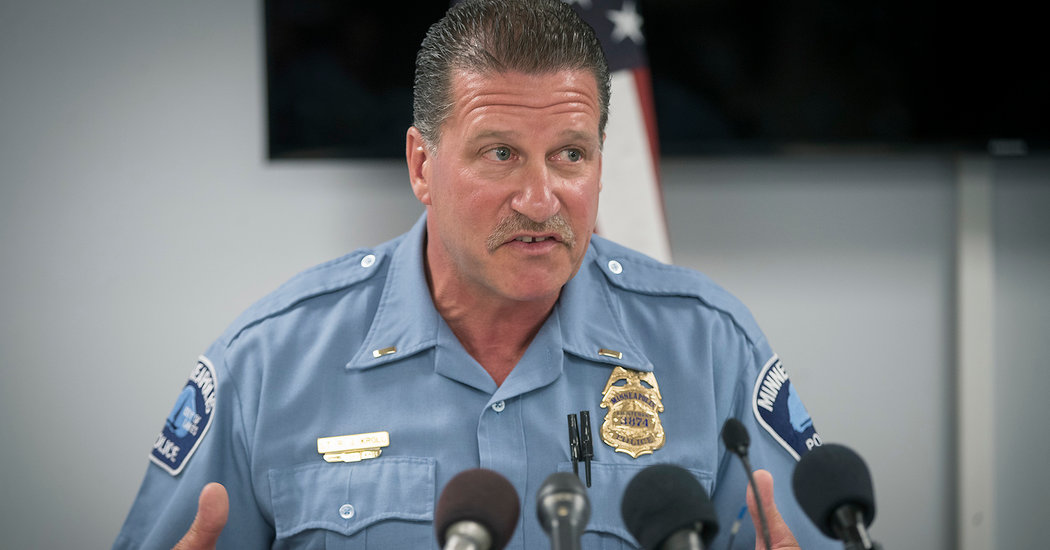 Over the past five years, as demands for reform have mounted in the aftermath of police violence in cities like Ferguson, Mo., Baltimore and now Minneapolis, police unions have emerged as one of the most significant roadblocks to change. The greater the political pressure for reform, the more defiant the unions often are in resisting it — with few city officials, including liberal leaders, able to overcome their opposition.

They aggressively protect the rights of members accused of misconduct, often in arbitration hearings that they have battled to keep behind closed doors. And they have also been remarkably effective at fending off broader change, using their political clout and influence to derail efforts to increase accountability.

While rates of union membership have dropped by half nationally since the early 1980s, to 10 percent, higher membership rates among police unions give them resources they can spend on campaigns and litigation to block reform. A single New York City police union has spent more than $1 million on state and local races since 2014.

In St. Louis, when Kim Gardner was elected the top prosecutor four years ago, she set out to rein in the city’s high rate of police violence. But after she proposed a unit within the prosecutor’s office that would independently investigate misconduct, she ran into the powerful local police union.

The union pressured lawmakers to set aside the proposal, which many supported but then never brought to a vote. Around the same time, a lawyer for the union waged a legal fight to limit the ability of the prosecutor’s office to investigate police misconduct. The following year, a leader of the union said Ms. Gardner should be removed “by force or by choice.”

Politicians tempted to cross police unions have long feared being labeled soft on crime by the unions, or more serious consequences.

When Steve Fletcher, a Minneapolis city councilman and frequent Police Department critic, sought to divert money away from hiring officers and toward a newly created office of violence prevention, he said, the police stopped responding as quickly to 911 calls placed by his constituents. “It operates a little bit like a protection racket,” Mr. Fletcher said of the union.

A spokesman for the Minneapolis Police Department said he was unable to comment.

A few days after prosecutors in Minneapolis charged an officer with murder in the death of George Floyd, the president of the city’s police union denounced political leaders, accusing them of selling out his members and firing four officers without due process.

“It is despicable behavior,” the union president, Lt. Bob Kroll, wrote in a letter to union members obtained by a local reporter. He also referred to protesters as a “terrorist movement.”

Mr. Kroll, who is himself the subject of at least 29 complaints, has also chided the Obama administration for its “oppression of police,” and praised President Trump as someone who “put the handcuffs on the criminals instead of us.”

In other instances, unions have not resisted reforms outright, but have made them difficult to put in place. Federal intervention is often one of the few reliable ways of reforming police departments. But in Cleveland, the union helped slow the adoption of reforms mandated by a federal consent decree, according to Jonathan Smith, a former U.S. Justice Department official who oversaw the government’s investigation of policing practices there.

Mr. Smith said union officials had signaled to rank-and-file officers that the changes should not be taken seriously, such as a requirement that they report and investigate instances in which they pointed a gun. “I heard this in lots of departments,” Mr. Smith said. “‘Wait it out. Do the minimum you have to do.’” He said he believed that the reforms have since taken hold.

Steve Loomis, the Cleveland police union president at the time of the consent decree, said he and his colleagues saw some of the mandated rules as counterproductive.

Robert Bruno, a professor of labor relations at the University of Illinois, posited that many police officers see themselves as authority figures who equate compromise with weakness. Other experts said it was rational for police unions, which are often regarded with suspicion by others in the labor movement and see themselves as distinct from it, to protect their members so relentlessly.

“A major role for police unions is basically as an insurance policy,” said Dale Belman, a labor relations professor at Michigan State University who has consulted for police unions. “The feeling of a lot of officers is that it’s very easy to sacrifice them. Something goes wrong and boom.”

This has only become more true in an era of ubiquitous cellphone cameras and social media. And the feeling of being under siege has only strengthened demands from union members that they be protected.

In Baltimore, where the city and the Justice Department reached a consent decree in 2017 to overhaul police conduct, the union has described a police department in chaos, with severe staff shortages and low morale. Those who remain said they feel unsupported by their commanders.

“They’re ready to throw police officers under the bus to appease the media and don’t support us even when our actions are appropriate,” said one officer surveyed in a report released last year by a group helping the department implement reforms.

It remains to be seen how the unions will respond to reform initiatives by cities and states since Mr. Floyd’s death, including a new ban on chokeholds in Minneapolis. But in recent days, unions have continued to show solidarity with officers accused of abusive behavior.

The president of a police union in Buffalo said the union stood “100 percent” behind two officers who were suspended on Thursday after appearing to push an older man who fell and suffered head injuries. The union president said the officers “were simply following orders.”

All 57 officers on the Emergency Response Team, a special squad formed to respond to riots, had resigned from their posts on the team in support of the suspended officers, according to The Buffalo News.

Unions can be so effective at defending their members that cops with a pattern of abuse can be left untouched, with fatal consequences. In Chicago, after the killing of 17-year-old Laquan McDonald by officer Jason Van Dyke, it emerged that Mr. Van Dyke had been the subject of multiple complaints already. But a “code of silence” about misconduct was effectively “baked into” the labor agreements between police unions and the city, according to a report conducted by task force.

New York City’s police unions have been among the most vocal opponents of reforms in Albany, including calls to reform the state’s tight restrictions on the disciplinary records of officers. Amid growing momentum in recent days for making those records public, the city’s police unions joined statewide police groups on Friday in urging the Legislature to keep the law in place.

“No rational policy discussion can take place against a backdrop of burning police vehicles and looted store fronts,” read a memo of opposition from the police groups.

The city’s patrol officers’ union, with roughly 24,000 active members, and another representing sergeants have been sharp critics of Mayor Bill de Blasio, who took office in 2014 riding a wave of discontent over stop-and-frisk policing.

The mayor promised reform, but after the fatal shooting of two uniformed officers in Brooklyn by a man who invoked the police killing of Eric Garner, Mr. de Blasio faced an all-but-declared revolt by rank-and-file officers.

The head of the patrol officers’ union, Patrick J. Lynch, said at the time that the mayor had “blood on the hands.” Many officers turned their backs on Mr. de Blasio at the slain officers’ funerals. And, days later, many more engaged in what amounted to a de facto work slowdown. Arrests plummeted as did tickets for minor infractions.

Mr. Lynch has stood by officers even when there is ample evidence of misconduct, defending the officers who killed Amadou Diallo in 1999 and another who, in 2008, shoved a bicyclist to the ground during a protest ride. The union provided lawyers for the officers involved in both cases.

When liberal politicians do try to advance reform proposals, union officials have resorted to highly provocative rhetoric and hard-boiled campaign tactics to lash out at them. This past week, the head of the sergeants’ union in New York posted a police report on Twitter revealing personal information about the daughter of Mr. de Blasio, who had been arrested during a protest.

In St. Louis, the business manager of a local police union, Jeff Roorda, penned an unflattering poem about Ms. Gardner, the local prosecutor, in a union newsletter that read: “You’re a disaster, Misses Kim/ Your heart is dark and vile/You’d rather charge a policeman/ Than all the murders you could file.” The union has also run social media ads against an alderwoman who has also advocated reform, Megan Green, referring to her as a “Communist Cop-Hater” and superimposing her head on the body of Mao Zedong.

At times, the strident leadership appears to beget still more strident leadership. In 2017, Chicago’s Fraternal Order of Police elected a new president who denounced a federal Justice Department investigation prompted by the shooting of Mr. McDonald as “politically motivated” and pledged to fight the “anti-police movement.” That president was ousted this year by a candidate who had derided the ensuing consent decree as “nonsense” and criticized his predecessor for failing to stand up to City Hall.

While statistics compiled by the group Campaign Zero show that police killings and shootings in Chicago have fallen following a set of reforms enacted after a federal investigation, advocates worry that the union will undermine them in contract negotiations. Police unions have traditionally used their bargaining agreements to create obstacles to disciplining officers. One paper by researchers at the University of Chicago found that incidents of violent misconduct in Florida sheriff’s offices increased by about 40 percent after deputies gained collective bargaining rights.

“By continuing to elect people who stand for those values, it more deeply entrenches the break between the community and the police,” said Karen Sheley, director of the Police Practices Project for the American Civil Liberties Union of Illinois. “It makes it far more difficult for reform efforts to go forward.”

As critics of the police get louder and more mainstream, union members have elected more aggressive leaders. In Minneapolis in 2015, Mr. Kroll defeated the union’s longtime president by a nearly two-to-one margin after the city installed a police chief intent on reform.

Ms. Harteau said that the department introduced new rules requiring officers to protect the “sanctity of life” and intervene if they saw a colleague improperly using force, but that the union under Mr. Kroll undermined the changes by protecting officers who violated the policies. Data on police shootings and killings in the city appear to show little change despite the reforms.

“I struggle to know if they have gotten more extreme, or if the world has changed and they haven’t,” Mr. Fletcher, the city councilman, said of the union. “Either way, they are profoundly misaligned with the moment.”