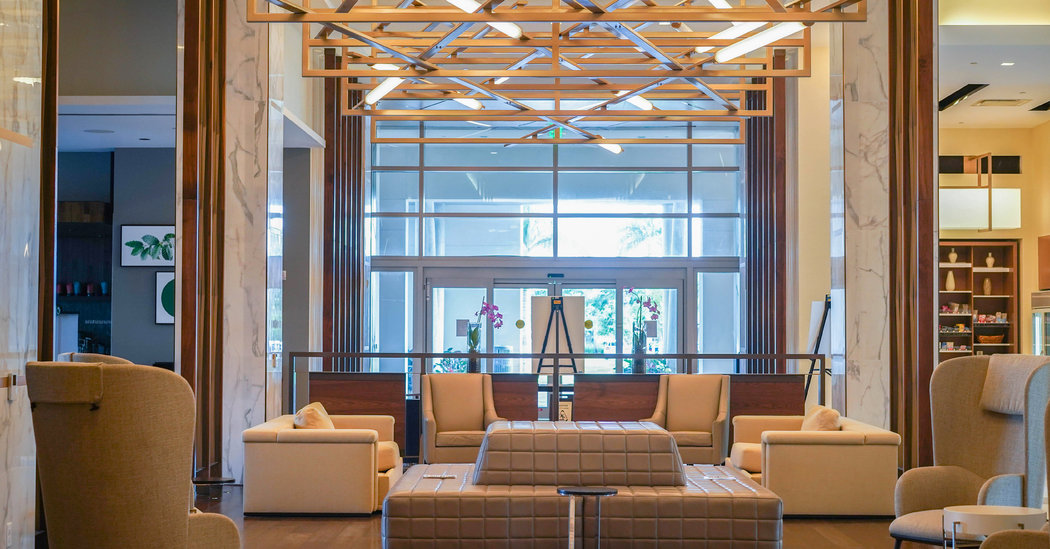 Over the past several years, hospitals began to play innkeeper to open the door to more elective surgery, which is the lifeblood of their revenue.

They developed hotels near their operating rooms where patients, who often came from overseas for specialized treatments, could recover comfortably. Expanding into the hospitality business also allowed health care providers to avoid the high costs of being hosts themselves.

But as with so much else, the coronavirus pandemic has devastated medical tourism. To allow doctors to focus on emergencies, hospitals have canceled hip replacements and tummy tucks, while flight bans have grounded many foreign visitors.

Compounding the decline, multiday protests in May and June against police brutality, set off by the killing of George Floyd in Minneapolis, have also given travelers pause, depriving hospitals of some of their best-paying customers, according to those who work in the industry.

“Unfortunately, the future looks bleak,” said Trey Hulsey, a co-founder of Hayakoum, a three-year-old service that handles travel arrangements for patients from the Middle East bound for hospitals in Boston, Houston and Philadelphia. “It’s just been one blow after another.”

Yet hospitals, whose costs have mounted as the pandemic dragged on, may have little choice but to revive the sector, according to some developers, who are forging ahead despite the uncertainty.

In Miami, for instance, plans are in motion for Legacy Hotel and Residences, a mixed-use tower from the developer Royal Palm Companies that is taking the hospital-hotel concept in a different direction.

Instead of situating its 256-room hotel and 100,000-square-foot hospital side by side, as might be the case on some campuses, Legacy sandwiches the two entities into a single 680-foot high-rise the shape of a stapler.

Also included in the nearly $500 million project, which is set to break ground this fall as part of the Miami Worldcenter mega-development, are condos, a full-floor fitness center and spa, shops, bars and restaurants.

Someone who goes to the tower looking to, say, replace a damaged knee would undergo surgery in the Center for Health and Performance, a 10-level facility at the tower’s base. Then, after being wheeled down halls and into a private elevator, the patient would begin a stay of a week or so in a hotel room above.

Sixteen suites with nurse service will be available for those needing greater attention, though patients with fewer needs will stay in typical hotel rooms, said Daniel Kodsi, the chief executive of Royal Palm, a co-developer of Paramount Miami Worldcenter, a condo tower down the street.

The pandemic has not halted sales of Legacy’s 274 condos, whose studios start at $300,000, but it has delayed the selection of an operator for Legacy’s $60 million hospital, which Royal Palm prefers to call a “medical center” because it will lack an emergency room and offer only outpatient procedures.

Developers say the distinction is crucial. Some hotel guests are bound to feel uneasy about sharing space with people who have spent time in a hospital — a concern amplified by the spread of the coronavirus — even if the discharged patients pose little risk of infectious disease.

“You’re in a luxury hotel,” Mr. Kodsi said. “You don’t want to be around people who are dying.”

Still, as the pandemic intensified, Legacy made changes to allay fears. A medical-grade air-filtration system, previously planned just for the hospital, will now be used for the entire tower.

Plus, robotic cleaning devices that use ultraviolet light, once envisioned solely for operating rooms, will be deployed to disinfect gathering areas in the hotel and condo sections, Royal Palm said. And doors throughout the tower are being reconfigured to allow phones or voice commands to open them remotely, so no patient or guest has to touch knobs or handles.

Because the Legacy will offer such a germ-reduced environment, as well as services like medical checkups that can be reached by an elevator ride, the multifunction tower could also be a good candidate for a quarantine destination, should a pandemic hit again, said Stephen Watson, Royal Palm’s chief strategic officer for medical development.

Not all medical tourists arrive from abroad. Deprived of specialized care by the closing of rural hospitals, they come from within the United States, too. And a Hyatt opening next month in Chicago’s hospital-packed medical district is expected to serve some of them.

Offering 210 rooms, for both short- and long-term stays, the new hotel is part of a $90 million conversion of a column-lined 1914 former hospital that is also to feature a medical museum. The project is being overseen by a team led by Murphy Development Group, which developed a similarly patient-focused property, a 276-room Holiday Inn at the Cleveland Clinic, in 2016.

The plunge in elective surgery this spring has hollowed out the Cleveland property, said John T. Murphy, the firm’s chief executive: About the only guests who have been around in recent months are visiting health care workers.

But even without long lines of plastic-surgery seekers, hotels can be vital partners for hospitals, providing extra beds during a public-health crisis, even if there was not always a need for surplus cots this time around. “Hotels make a ton of sense from a logistical perspective,” Mr. Murphy said.

From a financial perspective, hotels have been a smart bet, as elective surgery accounts for more than a third of all spending at some major hospitals, according to David G. Vequist IV, the founder of Center for Medical Tourism Research, a group based in San Antonio that was founded in 2008.

And as hospitals experienced a drop in demand in recent years because of high deductibles and other factors, offsetting the difference with deep-pocketed medical tourists was considered a priority, Dr. Vequist said.

Institutions with global recognition have been the most likely to embrace the trend, like Johns Hopkins in Baltimore and the Mayo Clinic in Rochester, Minn., though even Sanford USD Medical Center in Sioux Falls, S.D., has seen the value in controlling the lodging experience for its patients. It has invested in an outpost of Home2Suites, a Hilton brand, across from its campus.

South America is the point of origin for many patients at Baptist Hospital of Miami, a 799-bed facility known for cancer care that last year razed a low-slung dated hotel to make way for a Hilton Miami Dadeland, which has 186 rooms, starting at $100 a night, plus a farm-to-table restaurant. A van shuttles patients around Baptist’s 100-acre campus in the Kendall neighborhood. The hospital declined to say how much it cost to develop the hotel.

“The international piece was growing, and we were constantly arranging for area hotels and apartments,” said Ana Lopez-Blázquez, an executive vice president at Baptist Health South Florida, which owns the Miami hospital. “We want to be focused on the entire patient experience.”

Success does not entirely depend on patients. The typical ratio of medical tourists to other travelers is about 50-50 at the hotel, which has 80 percent occupancy, Ms. Lopez-Blázquez said. But this spring, occupancy plummeted to 30 percent, she added, and almost all the guests had a Baptist connection.

Still, things might have been worse. Most Miami-Dade hotels were forced to shut down this spring, but Baptist’s Hilton, considered essential, stayed open.

What also makes the hotel different, Baptist says, is that a hospital is in charge. When hotel employees were struggling to find protective gear, Baptist came up with the proper equipment. Similarly, steps taken to safeguard guests like plastic guards at the check-in desk and a reconfigured pool entrance, to ensure social distancing, are up to medical standards as well.

“I think the sensitivity is there because the owner is a health care organization,” Ms. Lopez-Blázquez said, “so there is really no debate.”