How The Seattle Times Has Dealt With the Coronavirus Pandemic 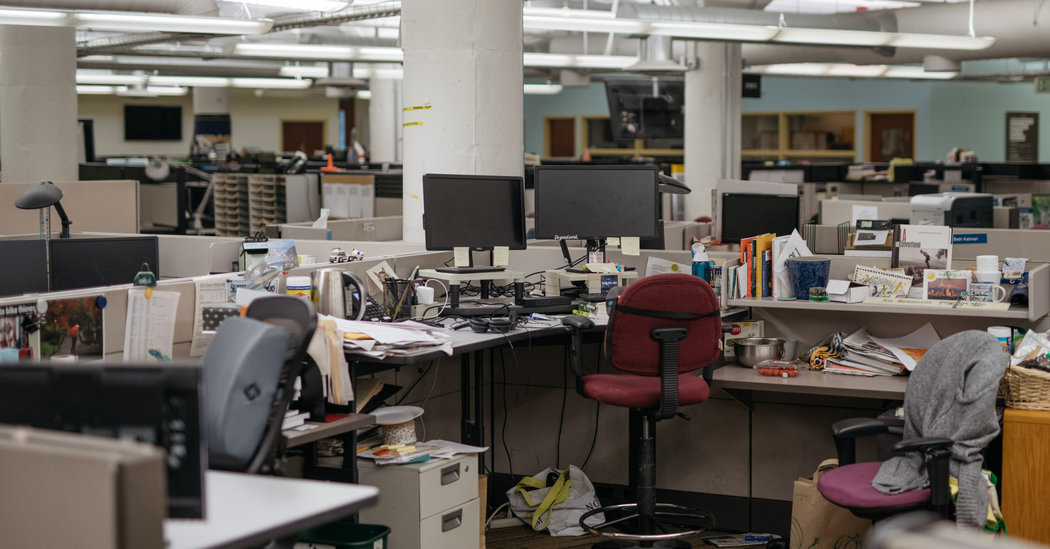 SEATTLE — It was supposed to be a quiet Saturday.

Sydney Brownstone was in the newsroom at The Seattle Times, monitoring the police scanner for any activity and planning to spend the day, Feb. 29, working on an upcoming article.

Then came an email saying someone had died at the Life Care Center of Kirkland, an assisted-living facility about 20 minutes to the northeast. More people were sick. It was the coronavirus.

Journalists began streaming into the newsroom. The disease had already been on people’s minds: The paper’s health reporter, Ryan Blethen, had started reading up on the coronavirus when the outbreak began in China, figuring that if it came to this country, it could hit the West Coast first. In January, when the first person in the United States got sick — in nearby Snohomish County — the newsroom began preparing, making a spreadsheet listing all members of the staff and what they would need to work from home.

Soon after the news broke on Feb. 29, the staff realized that this wasn’t just a one-off story. This was an outbreak, and The Times was at the epicenter.

For journalists, a sense of excitement comes with covering a major story, with giving people crucial information during a crisis. But to the employees of The Seattle Times, these weren’t just any readers. These were their neighbors, their children’s teachers and their friends.

The Times has 58 reporters, and nearly all of them are covering the coronavirus, likely making them the largest group of journalists from a single outlet on the ground in Seattle. As the national media began descending on Kirkland, The Times remained focused on telling residents which schools had closed, how they could buy groceries online and how local health care workers were beginning to ration medical supplies.

“That’s what local papers are meant to do,” Ms. Brownstone said. “We’re not built for a lot of other things, but we’re built for this.”

Ms. Brownstone writes for Project Homeless, one of several projects at the paper funded by community grants — money that The Times has relied on as the decline of print advertising and subscriptions has decimated local papers around the country. (The Times’s newsroom of roughly 150 people, including editors and other staff, is half the size it used to be.)

She has been driving to homeless encampments that dot the city to report whether people have access to clean water to wash their hands, if anyone from the city has come to give them information on staying safe, how they’re disposing of trash.

Normally Ms. Brownstone tries to shake people’s hands at the camps, to “recognize their humanity.” But lately, she has had to give the “coronavirus elbow bump,” as the newsroom has been calling it.

In the newsroom, tubs of Clorox wipes sit on tables. Editors have started to hold meetings remotely, even for those in the office, who log in from their desks. The executive editor, Michele Matassa Flores, has encouraged the staff to work from home, but many aren’t listening. The tone of her emails has gotten more forceful.

“IMPORTANT: We expect you to be working remotely,” a recent subject line said.

Ms. Flores is planning for when an employee gets sick.

This week, she had a conference call with editors from seven other regional papers who were preparing for the virus to reach their communities. They wanted to know how Ms. Flores was covering the outbreak while keeping her staff safe.

“We all know each other and talk on occasion,” she said. “It’s like a support group for regional papers.”

Mr. Blethen has been on the health beat for a little more than a year. He spends his time going to a hospital to talk to the doctors who have received some of the first coronavirus patients.

His family has also owned The Times for more than 100 years — it is one of the last family-owned papers in the country — and his father in the publisher.

Mr. Blethen has been going into the office. He wants to make sure he’s living up to the expectations anyone may have of him.

“I think it is up to us to actually be there even if there is some danger, because if we’re not going to do it, nobody’s going to do it,” he said. “I’ll be one of the last people not coming in.”

The community seems to have noticed. Ms. Flores said traffic on The Times’s website was up, signaling that residents are relying on the paper’s local live updates and breaking news, which have been plentiful. The governor declared a state of emergency. Schools across the state have closed. And at least 20 coronavirus deaths have been linked to the assisted-living facility in Kirkland. Washington is second to New York in the number of coronavirus cases, with more than 500, and it had the most deaths of any state — 40 as of Sunday evening.

There has also been a lot of bad information to be debunked, said Paige Cornwell, a reporter.

The paper is sharing its online coronavirus coverage free to nonsubscribers, but subscriptions are still up. Readers even sent pizzas to the newsroom.

“We actually started subscribing again,” said Kristine Zaballos, a resident of Seattle who uses the paper to learn which businesses are still open, as well as for entertainment.

“It’s one of the things you can do: You can read more when your other options are limited,” she said.

Evan Bush, who covers climate and the environment, was one of the first reporters at the paper to start writing about the virus. He likes being outside, and his hands are normally a little beaten up from rock climbing. Now his knuckles are red and scabby from all the hand washing. He has been walking the half-hour to work, and avoiding public transit as much as possible.

“That’s what we have throughout our newsroom — deep ties to this area and deep love for this area and a sense of duty and obligation to report this in a way that I would say is smart and thoughtful and compassionate for Seattle,” Mr. Bush said.

The reporters are not allowed to break quarantine to interview someone who is sick. There are some masks, for when they inevitably end up near a sick person. A local tech company offered to buy more, but Ms. Flores turned it down. It is a company the paper covers, and she worried about the potential conflict.

Ms. Flores, who has been executive editor since May and has worked at The Times for more than 25 years, has been thinking a lot about what the paper will tell readers if someone on its staff falls ill. She wonders how to explain that the newsroom is staying safe, and trying to keep the community safe, so that people are not scared to encounter her reporters. In case the office closes down, she is making plans to move half the paper’s limited supply of protective gear — the masks, goggles and gloves that, until now, had sat in a supply closet in case the annual May Day parade gets too wild and the police use tear gas — to a staff member’s detached garage, where someone can retrieve it even if the home is quarantined.

She said she was glad that her bosses at The Seattle Times Company, which also owns The Yakima Herald-Republic and The Walla Walla Union-Bulletin, were the ones who had to worry about the possibility that the printing plant would have to close.

“We have uttered the words,” she said. “That’s a scary proposition.”

Ms. Cornwell has a can of La Colombe coffee and a dozen other drinks on her desk. They have been accumulating since the first case was confirmed in January, and she simply hasn’t taken the time to throw them away. She spends her time ping-ponging between nursing centers that have reported illnesses, the newsroom and the daily briefings at the Kirkland center, where relatives of the residents peer into windows and meet with administrators, desperate for information on the condition of their loved ones.

“The facilities have said, ‘Well, if someone wants to leave, they can,’ but there’s a lot of confusion among the residents,” Ms. Cornwell said. She added that some people required too much care for their families to take them home.

Her own mother had spent time in an assisted-living facility after suffering a stroke. Ms. Cornwell recently had a nightmare in which her mother was trapped inside and Ms. Cornwell couldn’t get her out.

“We could see her, but we couldn’t get her,” she said.

Last Tuesday was primary election day in Washington. Like any other reporter at a local paper who has to pitch in on multiple beats when things get busy, Ms. Cornwell spent most of it focused on the coronavirus before heading to the newsroom to help update the website as results came in.

“I need to take advantage of being healthy,” she said.

She would also have to interview a relative of someone who died of the coronavirus. She wasn’t yet sure how she’d juggle everything. She knew, however, that she’d figure something out.