Ice cream and pizza crusts: How spiked seltzer is evolving beyond beverages 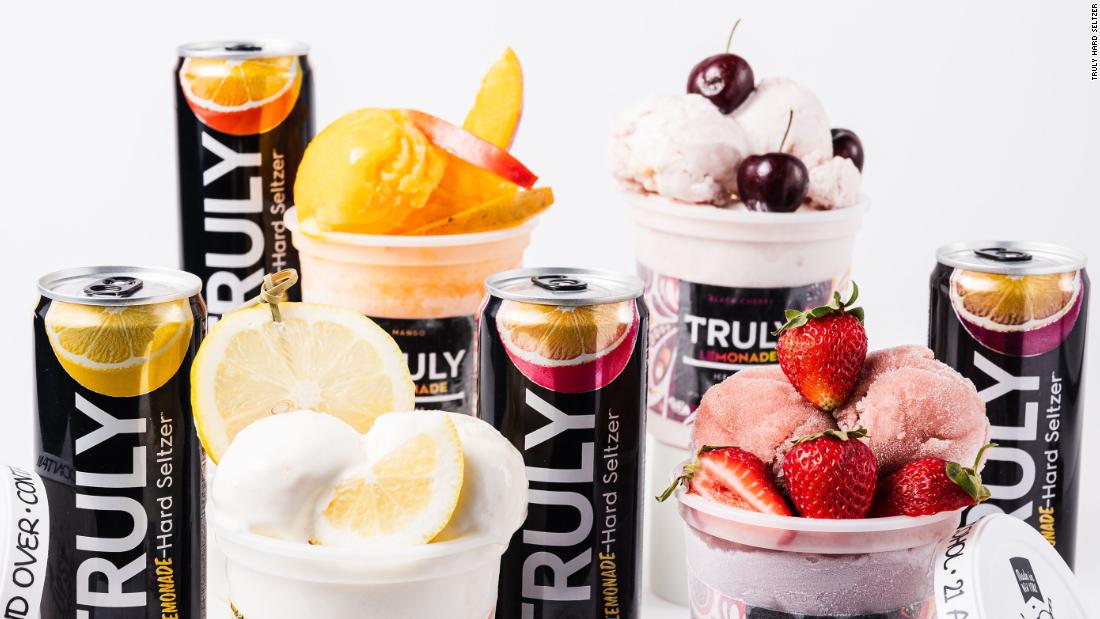 White Claw, Truly and Cutwater Spirits, three notable brands are testing their flavors in snack form, rolling out new boozy pops, ice creams, and, even a pizza crust. And for good reason: Nielsen said in a report last week that the beverages are experiencing “phenomenal growth,” aided partly by the pandemic.
Since Covid-19 prompted lockdowns in the United States in mid-March, hard seltzer retail weekly sales have surpassed the week of July 4, 2019, which was previously the highest individual week of sales last year. In the week around Memorial Day, seltzer sales hit their peak and tallied $110 million — a more than 200% increase compared with the same week a year before.

This summer, companies are hoping the seemingly unquenchable thirst will translate beyond beverages.

The California-based distillery has rapidly expanded into the canned cocktail and seltzer market over the past year with nearly 20 types of drinks. This month it’s rolling out alcoholic ice pops based on its best-selling flavors, including tequila margarita, vodka mule, and rum and cola.

The idea was to offer customers “another fun way to enjoy a high-quality Cutwater cocktail anywhere,” according to Gwen Conley, the company’s director of quality and innovation. Each ice pop has 7% alcohol by volume, roughly the same amount of booze in one of its canned cocktails.

A variety pack of 12 retails for $25 and will be available nationwide in mid-July.

The Boston Beer-owned seltzer brand reformulated its flavors and added lemonade to its lineup over the past year. Now, it’s moving into ice cream with what it’s calling a “first-of-its-kind spiked seltzer ice cream.”

Casey O’Neill, the senior produce development manager for Boston Beer (SAM), said the combination was a “no brainer” because the combination of ice cream, sorbet and spiked seltzer are summer favorites. “As the most innovative hard seltzer in market, we’re constantly looking for ways to expand and evolve our offerings to consumers,” she told CNN Business.
All four pints cost $48 plus the price of shipping on TipsyScoop.com.

The top-selling spiked seltzer brand teamed up with fast-casual chain Blaze Pizza to make a White Claw crust. The dough used “Mango White Claw” instead of filtered water in a one-off special last month.
Blaze’s head chef Brad Kent told Food & Wine that the combination was sparked by the “sweet smell of fermentation” that reminded him of mango. He loved it so much that he rolled it to 40 locations for people to try.

The chain declined to provide sales figures about the special, but a spokesperson told CNN Business it “saw incredible guest enthusiasm” for the crust. Blaze added it’s “being thoughtful on how we can continue this fun partnership” later this summer.