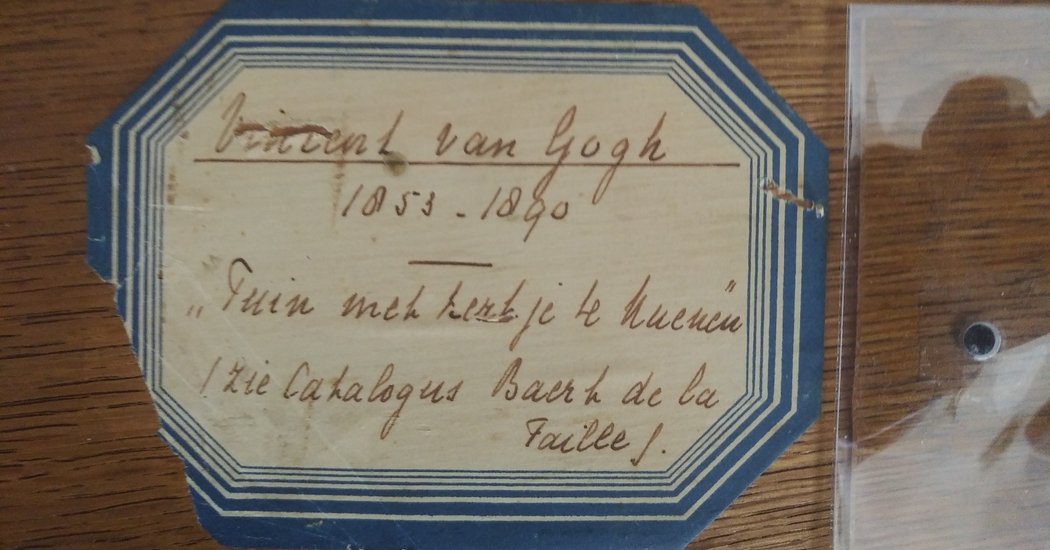 AMSTERDAM — The photographs look like the sort of images that kidnappers distribute with a ransom demand to establish that their victim is alive. A newspaper’s front page is included and used as a time stamp to indicate that the images are recent.

In this case, the subject isn’t a kidnapping victim, but rather a Vincent van Gogh painting that was stolen from the Singer Laren Museum in the Netherlands in March.

Arthur Brand, a private Dutch art crimes detective who is investigating the theft, said only that he received them from a “source in my network,” without further elaboration. He posted them on his Twitter feed and shared them with a Dutch newspaper, De Telegraaf, which published them on Thursday.

Mr. Brand suspects that the images were circulated in criminal circles in an effort to find a potential buyer. He said he shared them to see if he could develop any leads.

“They are important because it’s a proof of life,” Mr. Brand said. “In many cases like this art theft, you see that criminals get nervous and they feel the police are on their backs and they destroy it. Now we know that it hasn’t been destroyed.”

The police investigating the case did not immediately respond to a request for comment. Mr. Brand declined to say whether he had been contacted by the police about the photos.

Ursula Weitzel, a leading art crimes prosecutor in the Netherlands, said she had never before seen “proof of life” photographs of art works circulated like this.

The painting, “The Parsonage Garden at Nuenen in Spring,” from 1884, was stolen while part of a temporary exhibition at the Singer Laren, on loan from the Groninger Museum. Security camera footage of the robbery on March 30 shows a man breaking into the museum using a sledgehammer to smash two glass doors and leaving with the painting under his arm.

Andreas Blühm, director of the Groninger Museum, said the photographs of the painting appear authentic, because one shows the back of the work. “You can only have that if you have the painting,” he said in an interview. “There are no published images of the back side, so it’s probably very likely that this is genuine.”

He said that he could not comment on whether the museum had been approached with a ransom demand.

Esther Driessen, a spokeswoman for the Singer Laren, said the museum was happy to see that the painting had not been destroyed. “We hope that it will be back in the museum undamaged,” she said.

In one photograph, the painting is positioned between a May 30 edition of The New York Times newspaper that featured an article about the theft, and the biography of the convicted thief Octave Durham, who stole two van Gogh paintings from the Van Gogh Museum in Amsterdam in 2002. Those works were retrieved from the home of a mafia boss in Italy in 2016.

“I’ve said from the beginning that this is a copycat,” Mr. Brand said. “These guys want to do what Octave did and sell it in the criminal underworld. This picture shows that that’s a quite good theory. They show that they have the book in which this whole story is written.”

(Mr. Durham was in the hospital at the time of the Singer Laren break-in.)

Mr. Blühm said he was distressed to see apparent damage to the work. “It is out of the frame, so that’s already damage,” he said. “The way it was taken out was not very gentle. We treat paintings differently.”

“It hurts to see it like that,” he said, “because they put the book on the painting, and we don’t do that — it’s terrible. But seeing the image also gives me a bit of a relief to know that it’s still there. The rest is speculation. I hope it will come back soon.”