In the Race for Coronavirus Drugs, This Scientist Urges a Slower Pace 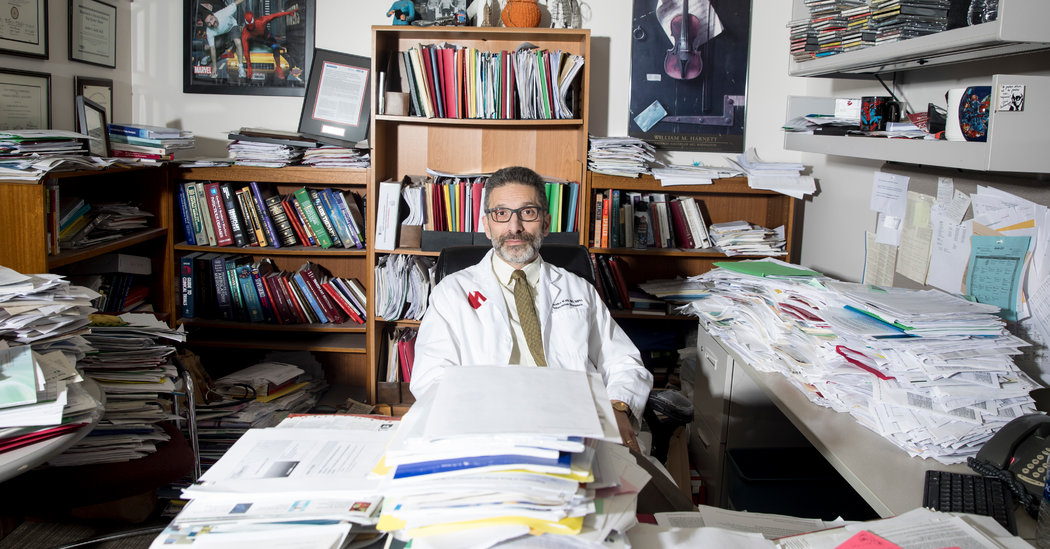 OMAHA — Beginning every morning at 5:30, Dr. Andre Kalil makes himself a double espresso, runs 10 kilometers, makes additional double espressos for himself and his wife, and heads to his laboratory at the University of Nebraska Medical Center.

A deluge awaits him.

Calls and insistent emails pile up each day. Patients and their doctors are clamoring for untested coronavirus treatments, encouraged by President Trump, who said that “we can’t wait” for rigorous studies of the anti-malarial drugs chloroquine and hydroxychloroquine, and that ill patients should have ready access to experimental medicines.

Dr. Kalil, 54, is a principal investigator in the federal government’s clinical trial of drugs that may treat the coronavirus. It is starting with remdesivir, an antiviral drug. The first results will be ready within weeks.

Dr. Kalil, who has decades of experience grappling with questions about the use — and misuse — of experimental drugs, has rarely been more frustrated. He has seen what happens when desperation drives treatment decisions. “Many drugs we believed were fantastic ended up killing people,” he said in an interview. “It is so hard to keep explaining that.”

Dr. Kalil is haunted by memories of the Ebola outbreak that ravaged Africa from 2014 to 2016. Then, too, doctors said they could not wait for scientific evidence, and untested drugs were given to suffering Ebola patients by optimistic physicians with noble intentions. In the long run, none of the drugs was ever approved in the United States for treatment of the disease.

Today, hope centers on chloroquine and hydroxychloroquine. These drugs have been tested in the laboratory against many viruses: SARS and MERS — both coronaviruses — as well as H.I.V., dengue, Ebola, chikungunya and influenza. But even when they seemed to work, what succeeded in the test tube did not succeed in real life, Dr. Kalil said.

In fact, the anti-malarial drugs have never been found to work against any viral disease, including Ebola. (Malaria is caused by a parasite, not a virus.) And the drugs have side effects, including damage to the liver and bone marrow, as well as heart rhythm disturbances that could be fatal in older people and young people with serious medical problems.

That is not to say the drugs won’t help patients with the coronavirus, only that whether this is so is unknown.

“This is very charged emotionally,” Dr. Kalil said. “It is Ebola déjà vu.”

Dr. Kalil, an intensive care specialist, is a principal investigator in an unusual federal trial that may shape the course of the coronavirus pandemic.

Every surface in his office at the University of Nebraska Medical Center is piled with stacks of papers and folders — these days, there is no time to clean up. His lunch, at 3 p.m. on a recent afternoon, consisted of a turkey wrap and a bottle of water from a mini refrigerator.

Dr. Kalil is voluble, lean and energetic, an unabashed patriot whose family emigrated from Brazil decades ago. He can be confrontational, and has squared off with leading scientists when he feels their treatments cannot be justified by scientific evidence.

He has participated in 22 marathons, and knows that now he is running in the most important race of all. As patients and the president alike demand treatments, he wants people to understand that testing is proceeding as quickly as possible.

“At the risk of sounding clichéd,” said Dr. John Lowe, assistant vice chancellor at the medical center, Dr. Kalil is “the type of person who elevates a team through his demeanor and approach to research.”

There is no vaccine and no treatment for Covid-19, the respiratory illness caused by the coronavirus. As of Thursday, the virus has infected 1.5 million people worldwide, at least 430,000 in the United States alone, where it has killed more than 14,500 people.

Remdesivir, made by Gilead, was chosen to be the first treatment evaluated in the federal effort after investigators did a careful search for drugs that might be effective. It was designed to be a broad spectrum antiviral that stops the synthesis of genetic material in a variety of viruses.

Laboratory and animal studies suggested that remdesivir might be effective against coronaviruses, and safety studies had already been conducted in animals. The drug also was tested in animals infected with MERS and SARS, both caused by coronaviruses.

“We don’t know if remdesivir will get into the lungs in a high enough concentration to kill the virus,” Dr. Kalil said of its possible use to treat Covid-19. “We don’t know if it will cause side effects.”

It is even possible that taking the drug may hasten patients’ deaths. “That is why we need a randomized controlled trial,” he said.

“I would never give this or any other experimental drug off-label to my patients,” Dr. Kalil said. “There is nothing compassionate about compassionate use. You are treating emotion.”

The problem is not just that an experimental drug may not work or may endanger patients. It is also that if a drug is distributed to patients far and wide, no one will ever know if it works.

If a Covid-19 patient takes remdesivir or chloroquine and dies, did the drug fail? Was the patient too far gone? Did the drug actually hasten death?

If the patient survives, was it because of the drug? In spite of it? Without a controlled trial, there’s no good answer, and no way to compare patients once the drug is handed out routinely.

The trial Dr. Kalil leads is not the only one testing remdesivir against the coronavirus. But it is the only trial with the rigor to show whether this or other drugs work in the American population.

The research began in February with three patients who had been infected aboard the cruise ship Diamond Princess and were flown to the University of Nebraska Medical Center.

About 400 patients are now enrolled at various sites, and with that number the trial has enough patients for a preliminary analysis, now underway, which will determine if the experiment should continue with remdesivir.

In the usual clinical trial, one drug is tested against a control substance — placebo or the standard-of-care drug — for a set period of time. The investigators are not permitted to see the data.

When the trial ends and the data is revealed, the researchers decide if the new drug is helpful. If it is not, the process must start over with a different drug. The experiments can take years.

But Dr. Kalil is running a so-called adaptive trial. Researchers start by comparing an experimental drug — in this case, remdesivir — to the placebo. After a comparatively short period of time, they peek at the data.

If patients taking remdesivir are faring better than those taking the placebo, the study will move on to a second phase in which another drug is tested against remdesivir, which becomes the trial’s control.

The point is to find something that shows some efficacy quickly, and there is no specific stopping point.

He declined to say which drugs are in line for testing after remdesivir, concerned that he might set off another wave of demand for unproven drugs.

In addition to criticizing the demand for the drug under compassionate use, Dr. Kalil also lamented publication of case studies in prestigious medical journals of single patients who took an untested drug.

“Publishing a single case report of an experimental drug as an original article in a high-impact journal during an outbreak is akin to sensationalist news,” he said.

“We must do better than that to save lives during a pandemic,” he said.