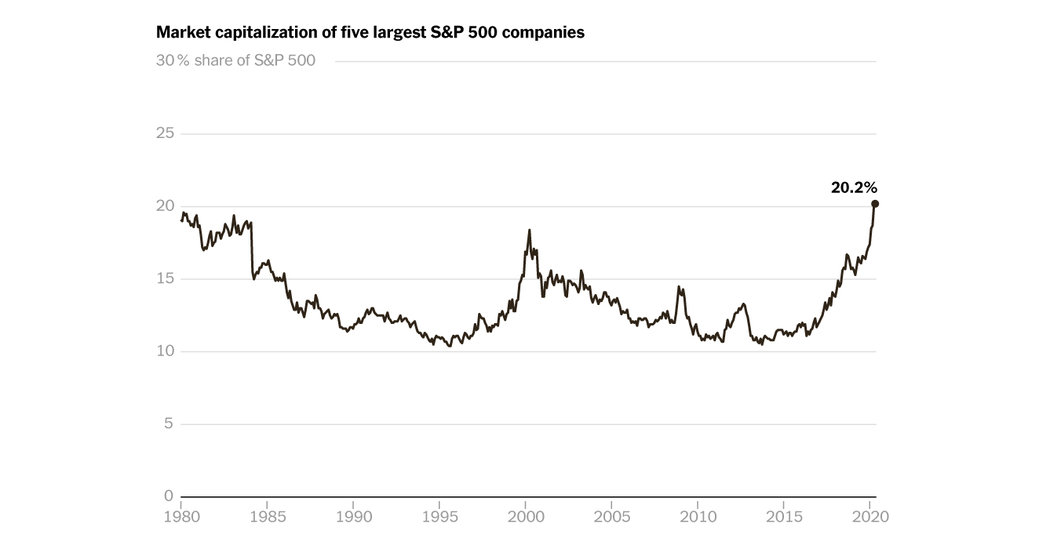 An economic downturn almost always favors giants like Microsoft, Apple and Amazon, the country’s three biggest companies. But the demand for their shares has only been amplified by a crisis that seems almost tailor-made for their future success.

Even as analysts have trimmed expectations for all three companies’ quarterly earnings, which they’ll report this week, their stocks are climbing. Their combined value rose more than three-quarters of a trillion dollars over the last month — more than the cumulative gain of the bottom 300 stocks in the S&P 500.

Investors are betting, in part, that the Covid-19 crisis accelerates the already growing power of America’s corporate colossuses.

“The firms that were the top dogs going into the crisis also happen to have the most resilient business models because they can do everything online,” said Thomas Philippon, a professor of finance at New York University. “It turns out Amazon was one of the most successful businesses in the U.S., and on top of it, they are the ones who can keep processing orders.”

Besides benefiting from their gargantuan size, Microsoft, Amazon and Apple are all sitting on mountains of cash that will make them largely immune to the funding squeezes other companies are experiencing.

“Investors are telling you that the bigger, stronger, more stable balance sheet company is going to win versus its smaller peer,” said Stuart Kaiser, head of equity derivatives research at UBS.

But the depth of the current economic decline makes it reasonable to expect that such large companies will emerge in an even more dominant position this time around, said Mr. Philippon, who last year published a book, “The Great Reversal,” that examines the competitiveness of the American economy.

The difference in investor expectations for large and small companies is stark: The Nasdaq 100, an index of the largest technology companies — which also happen to be the largest companies in the country — is up 1.2 percent this year. The Russell 2000 index, which tracks small public companies, is down 23 percent — more than double the 11 percent in losses for the S&P 500.

That has supercharged the giants’ boom.

According to data from Goldman Sachs, the top 10 stocks in the S&P 500 this month accounted for roughly 27 percent of the total value of the index. That surpassed the previous peak, which came during the tech stock frenzy of the late 1990s. The top five companies alone — Microsoft, Apple, Amazon, Alphabet and Facebook — account for 20 percent of the index. The shares of all five companies are up more than 20 percent since the market hit its recent low on March 23.

While the concentration of market wealth in top companies has hit a peak in recent weeks, it has been a long-term trend in recent years, reflecting, in part, changes in the structure of corporate America. The years since the 2008 financial crisis have been marked by an increase in the consolidation of some industries, such as banking and airlines.

And as bigger companies have steadily grown, they’ve also snagged a larger share of profits. In 1975, the biggest 100 public companies in the country took in about 49 percent of the earnings of all public companies. Their piece of the pie grew to 84 percent by 2015, according to research from Kathleen M. Kahle, a finance professor at the University of Arizona, and René M. Stulz, an economist at Ohio State University.

The current surge of megacap stocks suggests that many investors expect those companies’ slices to expand even more after the current economic implosion, in which smaller companies are widely expected to be the hardest hit. Small-cap companies — such as those included in the Russell 2000 — carry more debt, making them vulnerable to having financing cut off by bond markets. They’re less globally diversified, making them heavily dependent on the performance of the economy in the United States, the current epicenter of the crisis.

At the same time, the peculiar quirks of the Covid-19 crisis — almost coincidentally — play to the business strengths of the big companies that were already the largest players in the American economy.

Amazon’s combination of online retail and cloud computing services for companies seems optimized for a work-from-home economy. Apple’s devices are a crucial part of mobile computing, and even though iPhone sales are expected to slow this year because of a downturn in shopping at Apple stores, analysts are projecting a robust bounce-back in demand next year. Microsoft’s corporate software packages, Azure cloud computing services and video gaming all could grow stronger in a work-from-home environment.

Those are all reasons that Microsoft is Jeb Breece’s largest holding in the mutual fund he helps manage at the New York money-management firm Spears Abacus, where he is a principal.

He emphasizes that he doesn’t believe that Microsoft, or any of the large tech companies, will be completely immune to the economic downturn. But he is betting that their financial stability will allow them to avoid layoffs and continue investing in product development and research during the downturn, helping them stay ahead of the competition.

“What you saw in ’08, ’09 was the companies that were able to continue to invest came out the other side and actually accelerated their growth relative to competitors,” he said. “And I think that probably happens again.”