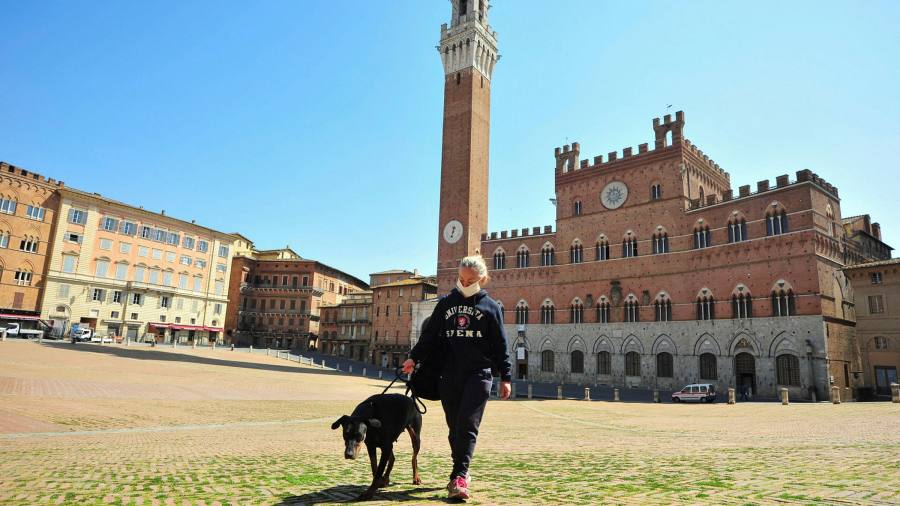 Rising borrowing costs for countries such as Italy show that the European Central Bank has a fight on its hands to prevent a new debt crisis, say analysts, even as it goes all out to ease strains caused by coronavirus.

Last month the ECB halted an alarming sell-off in the riskier corners of eurozone debt markets with a €750bn bond-buying plan that marked a significant escalation of its “quantitative easing” programme. But since then those gains have been all but wiped out.

This week, Italy’s 10-year government bond yield climbed above 2 per cent for the first time in a month, while the “spread” over German bonds — a closely watched measure of risk within the eurozone — widened to 2.6 percentage points. That is not far short of the peak of 2.8 percentage points during the March sell-off.

Heavily-indebted Italy has long been a bellwether for wider fears over the future of the eurozone. Such concerns have moved to the fore again in spite of the ECB’s radical easing measures, as investors worry about a surge in borrowing by Rome to tackle the viral outbreak.

“Italy is being hit on all fronts,” said James Athey, a fund manager at Aberdeen Standard Investments. “It’s a very weak economy to start with, with fractious politics and a high debt load. Then they’ve borne the brunt of Covid. Even with the ECB, the market is questioning whether this is sustainable.”

Politicians across the eurozone have discussed the issuance of jointly-backed “corona bonds” to share the financial burden of tackling the virus. But Mr Athey thinks meaningful progress on that front at Thursday’s EU leaders’ summit is unlikely, so he is betting on a further widening of the spread between Italy and Germany.

If he is right, the ECB’s resolve may soon be tested again. The market “could very quickly lose confidence” in Italy if spreads rise above March’s high, said John Taylor, co-head of European fixed income at AllianceBernstein. Fund managers like Mr Taylor are holding on to their Italian government bonds, betting that the ECB will expand asset purchases that are on course to reach roughly €1.1tn this year.

But this intervention looks modest compared to other major central banks, argues Iain Stealey, international chief investment officer for fixed income at JPMorgan Asset Management. The US Federal Reserve, for example, has put no limit on its purchases of government debt, and its balance sheet expanded by more than $1tn in the last two weeks of March alone.

“We’ve been discussing whether ECB QE could go from €1tn to €2tn,” said Mr Stealey. “It seems quite possible.”

Christine Lagarde, the ECB president, has made it clear that the central bank could go further if needed to stop the coronavirus crisis turning into another eurozone financial crisis. She wrote in a blog post this month that the bank would “not tolerate a procyclical tightening of financing conditions amid one of the greatest macroeconomic cataclysms of modern times”.

Even members of the ECB governing council who have criticised easing measures in the past now seem supportive. Klaas Knot, head of the Dutch central bank, said on Tuesday that the ECB would “step up” if needed.

Crucially, the ECB has already loosened many of the self-imposed restrictions that normally govern its bond purchases, such as the requirement to buy roughly in proportion to each country’s contribution to its capital. Since launching the €750bn programme, the ECB has bought €30bn-€40bn of Italian bonds, for example — about 40 per cent of the total and more than double the amount implied by Italy’s capital contribution, according to analysts at Goldman Sachs.

Economists say central banks now appreciate there is no point in preserving firepower during times of market stress. “‘Too little, too late’ is something that we need to avoid, as we learnt from the last crisis,” said Pernille Bomholdt Henneberg, global economist at Citigroup.

The scale of the task facing the ECB was underlined recently by Isabel Schnabel, its head of market operations, who said that Germany, France, Italy, Spain and the Netherlands were expected to issue more than €1tn of bonds this year alone.

Italy’s credit rating, which sits just two notches above the junk rating that would force many investors to sell its bonds, is set to be reviewed by S&P Global on Friday.

Despite rising in recent weeks, the country’s bond yields remain far below the levels hit during the eurozone debt crisis and the country retains regular access to markets. On Tuesday, Rome sold new five-year and 30-year bonds.

But even investors with ample faith in the ECB’s ability to keep spreads under control worry about a populist backlash inside Italy against the lack of solidarity shown so far by EU peers.

“Italy is not in danger of leaving the eurozone in the near future,” said David Zahn, head of European fixed income at Franklin Templeton. “But if the EU doesn’t come to an agreement [on corona bonds] you are sowing the seeds for some kind of political crisis down the road.”