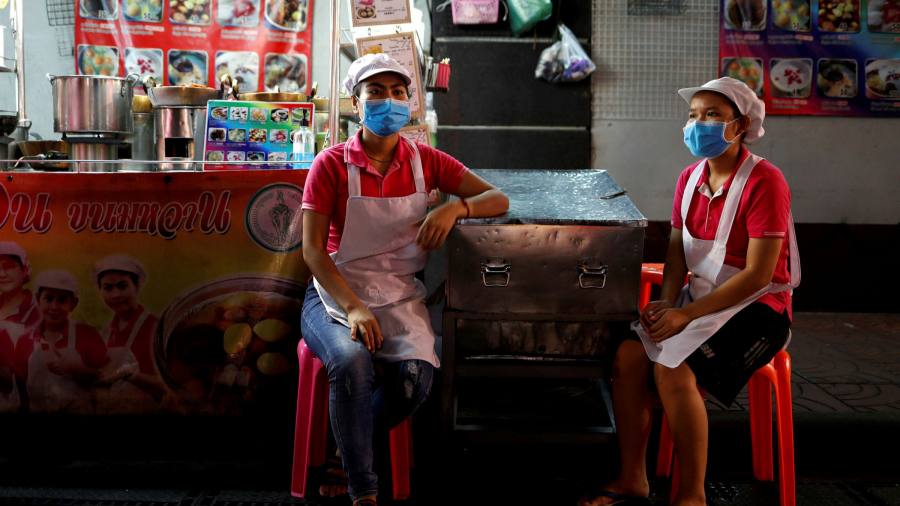 Outflows from EM debt funds hit $17bn in the seven days to March 25, according to data from EPFR Global, just a fraction below last week’s record outflow of $18.8bn.

The past four weeks have seen a total of $47.7bn withdrawn from the sector, equivalent to 10.2 per cent of assets under management. Within that, the rush of money exiting local-currency EM bond funds has overtaken that fleeing hard-currency vehicles for the first time since the crisis began.

The exodus has so far erased a third of the $140bn of net inflows that EM bonds have seen in the past four years, according to Bank of America.

“That is very extreme. That is a three or four standard deviation move,” said Tommy Ricketts, investment strategist at BofA.

Funds focused on both Romania and Thailand posted their highest-ever weekly outflows, with the latter, one of the most tourist-dependent economies in Asia, losing an “eye-popping” $3.9bn, according to EPFR.

The selling pressure has driven sharp losses for emerging market bonds, with JPMorgan’s core index of hard currency-denominated debt down 10.9 per cent in the year to date. Over that period, JPMorgan’s main measure of local currency debt has plunged 14 per cent.

Although this is by far the worst start to the year on record for outflows from EM debt funds, the wave of redemptions is still running below that seen in some previous episodes of turmoil. Outflows hit 16 per cent of AUM during the taper tantrum of 2013, for example, 19 per cent during the China sell-off and Greek default in 2015, and 34.5 per cent during the global financial crisis, according to Morgan Stanley.

Mr Ricketts of BofA said that investors would need to see the US dollar start to weaken, and to get a clearer picture as to how readily Covid-19 was transmitted within southern hemisphere countries, before returning to the EM asset class.

Analysts noted that it was encouraging that several EM governments sold new bonds this week, breaking a hiatus after Turkey’s sale of sovereign debt at the start of last month. Mr Lord of Morgan Stanley attributed that brighter sentiment to the promise of the $2.2tn US stimulus package, alongside additional global central bank liquidity measures and other sovereign fiscal responses. Together, he said, they had “reignited some level of risk-taking”.

Despite this, the total EM sovereign issuance this month comes to just $4bn, a pittance in comparison with the $31bn witnessed in March 2019. Mr Lord said that Qatar, Mexico, Brazil and Turkey were likely to seek to raise money in the near future.

Emerging market equity funds have held up somewhat better, with net outflows of just $5.1bn so far this year, according to EPFR. China and Brazil funds have both seen solid inflows.