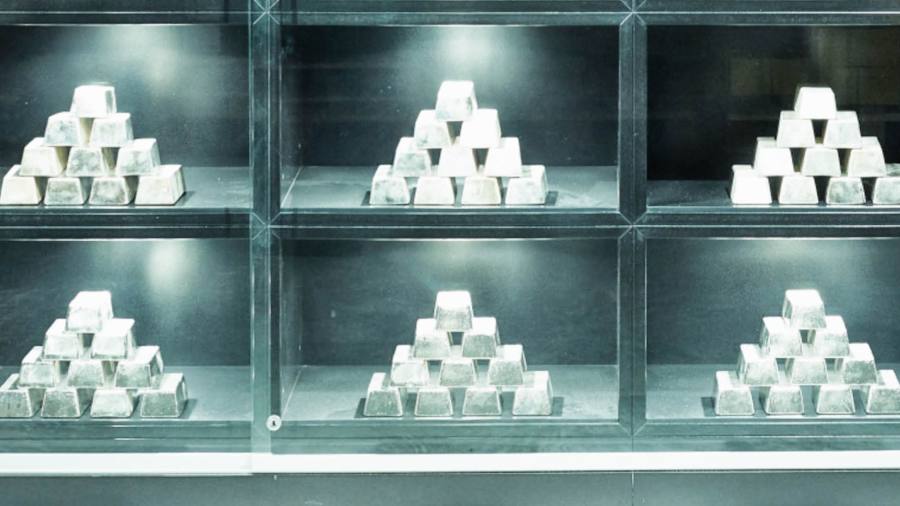 Investors are betting on a rally in silver, after the gap between gold and the industrial metal soared to its widest level in more than three centuries.

In March the price of an ounce of gold was 125 times higher than the same amount of silver — a record going back to at least 1687, according to data compiled by Ross Norman, a veteran gold trader.

But since then the gap has closed to about 113 times, and analysts say more gains for silver are possible, as economies start to recover from the shock of coronavirus-related lockdowns and demand returns for use of the metal in electronics and solar panels.

“The longer gold keeps having a good performance you will get speculators . . . who will go ‘oh silver is really cheap’,” said Grant Beasley, a fund manager at Highbury Capital in Toronto.

“It’s not the most complicated argument but it’s true. As the speculative fever increases retail investors will go crazy. And then when they’re feverish you’re close to the top.”

Silver prices dropped to an 11-year low of $11.62 a troy ounce in mid-March, but the metal has since rebounded to trade at $15 as holdings of silver-backed exchange traded funds hit a record high this month of 675m ounces.

Analysts at Bank of America predict silver could rise to $20 over the next 12 months as economic growth rebounds. In the wake of the 2008 global financial crisis, silver rallied 440 per cent from its bottom to $48.44 a troy ounce in 2011.

Gold has risen by 11 per cent this year to about $1,690 a troy ounce, driven by investor demand for the traditional haven asset. Holdings in gold-backed exchange traded funds rose seven-fold in the first quarter to a record high of 3,185 tonnes in March, according to the World Gold Council.

The recent rally in the yellow metal was a sign of “deep anxiety about the global financial system”, said Mr Norman. In Alexander the Great’s time the gold/silver ratio was about 12 to 1 and an inscription from the Karnak temple in ancient Egypt reports it as 13.3 to 1.

“Gold’s safe-haven status is coming to the fore,” he said. “Normally you’d expect silver to come along for the ride.”

About half of silver demand comes from the industrial sector, including the car and solar power industry, which has made it more vulnerable to the economic effects of coronavirus. Solar power projects are being delayed while the electronics supply chain has been hit by weaker consumer demand.

Analysts at Metals Focus predict that industrial demand for silver will drop by 7 per cent this year, with declines across all industries.

That is unlikely to be offset by shutdowns of silver mines in Mexico, Peru and Argentina, leaving a surplus of 14.7m ounces this year, they forecast.

Suki Cooper, an analyst at Standard Chartered, said silver tended to need solid demand from both investors and industries to outperform. That may not happen until later this year, she said.

Still, for many investors silver is too cheap, even given the Covid-19 slowdown. Ian Williams, chairman of the Charteris Treasury Portfolio Managers fund, said silver was just as good as gold as a hedge against inflation.

“You can go back 3,000 years before Christ — silver has never been this cheap relative to gold,” he said. “There’s no justifiable reason.”

Silver miners offer more upside to a rising price than gold miners, according to Mr Beasley. Many miners needed a price of just $17 to break even, he said. “When silver really starts to take off, the . . . returns in silver versus a gold producer are two to three times,” he said.

Among the biggest gainers in the sector so far are First Majestic Silver, a Toronto-listed miner whose shares rose by 29 per cent last month, roughly double the rise in the Canadian benchmark.

Enthusiasts note that the metal is used in clean-energy technologies that are set to see growing demand such as electric cars and solar panels. It is also used in 5G mobile infrastructure and in radars for autonomous vehicles.

New usages are emerging too: in March Samsung announced a new lithium-ion battery that uses a thin layer of silver-carbon material rather than graphite on its anode.