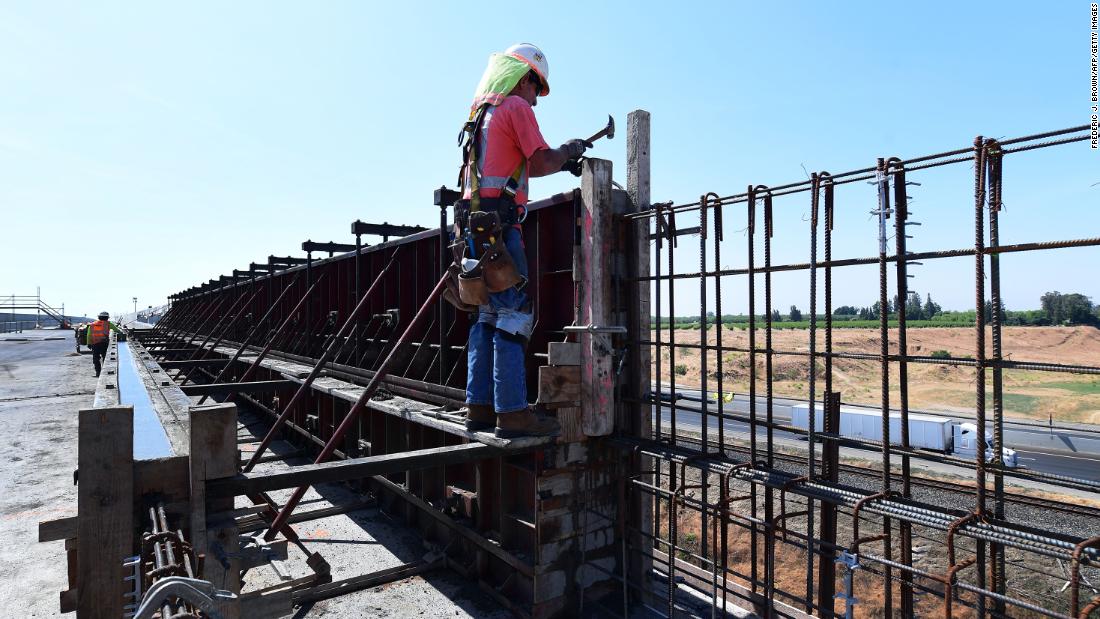 Shares of companies like equipment giants Caterpillar (CAT) and Deere (DE) and materials makers Vulcan (VMC), Martin Marietta (MLM) and US Concrete (USCR) all surged before the election four years ago on hopes that more infrastructure spending was a slam dunk no matter who won.

But this stimulus may be even more urgent now during the Covid-19 pandemic: Millions of Americans are out of work. Federal money earmarked for infrastructure could serve as a modern day version of FDR’s New Deal or Eisenhower’s Federal Aid Highway Act.

Several Democrats in the House and Senate are also in favor of earmarking more Covid-19 stimulus funding for infrastructure.

But it’s unclear whether Democratic congressional leaders Nancy Pelosi and Chuck Schumer will be able to come to an agreement on anything with President Trump — especially during a contentious reelection campaign.

An infrastructure bill would help many Americans

But that isn’t stopping market experts and economists from dreaming of a big infrastructure package.

“If you spend on building something with long-term value, that could benefit all Americans,” said John Creswell, executive managing director at Duff & Phelps Investment Management. “Given all the spending on Covid-related stimulus, you’d think an infrastructure bill would be a no-brainer.”

Creswell says he thinks there’s a 30% chance of a big bill passing this year given that politicians will be focusing more on the coronavirus outbreak and upcoming November election.

But he thinks there’s a 50% chance of a big spending package getting passed if Trump wins a second term and up to 70% if Joe Biden becomes president — especially if a Biden win is accompanied by Democrats winning more seats in the Senate.

There is a lot of proverbial low-hanging fruit that could be fixed relatively easily if there was money dedicated to infrastructure projects, said Frank Rybinski, chief macro strategist with Aegon Asset Management.

Put money to work now while rates are extremely low

Rybinski said putting people to work to repair roads, highways and bridges and upgrade airports could have a lasting impact on boosting the economy that goes beyond giving Americans a steady paycheck.

“There is a lot of transportation infrastructure to upgrade. If you do simple things like taking out potholes and widening lanes, you can get goods to ship faster and more efficiently,” Rybinski said. “It would be a great way to get an economic boost and raise productivity for the long term.”

Rybinski added that now is an ideal time for the government to spend — even if it involves taking on more debt — since the Federal Reserve seems committed to keeping interest rates near zero for the next few years.

“The government should be doing this now while funding costs are cheap. Now is the time to borrow to spend,” he said.

Still, some may scoff at the notion that the government should spend even more right now.

A ‘blue wave’ could lead to more spending

One strategist also expressed concern about what might happen to the stock market if Biden wins and the Senate also goes blue.
That could lead to more spending — but also higher taxes to make sure the deficit doesn’t balloon further.

“In a Democratic sweep, the new administration might feel pressure to reduce the federal deficit while simultaneously increasing spending on health care and infrastructure,” said David Kelly, chief global strategist with JPMorgan Funds, in a report.

“This would likely mean higher taxes on wealthier individuals and corporations, both of which would negatively impact real, after-tax returns,” Kelly added.

The hope is that any boost to economic growth and productivity that could come from finally upgrading vital parts of the nation’s infrastructure would offset worries about higher tax rates.