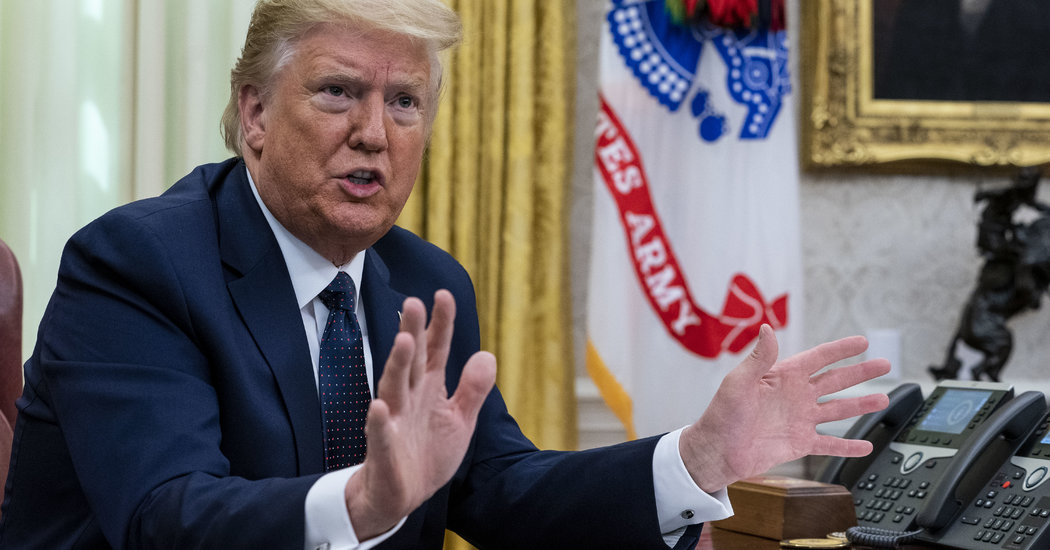 President Trump signed an executive order yesterday seeking to strip social networks of legal protections for user content. It’s unclear whether this is legally possible, and the threat of it didn’t seem to deter Twitter, the main target of Mr. Trump’s anger.

At issue is Section 230 of the Communications Decency Act, which protects tech companies from liability if users post defamatory messages on their platforms. Mr. Trump wants to eliminate that shield by giving federal regulators, like the F.C.C., leeway to examine whether social networks improperly restrict access to others’ content.

• “Social media giants like Twitter receive an unprecedented liability shield based on the theory that they’re a neutral platform, which they’re not, not an editor with a viewpoint,” he said in the Oval Office as he signed the order. (The Times’s Kevin Roose writes that Mr. Trump’s approach is an age-old internet tradition of rebelling against moderators.)

Many legal experts say the order may not succeed. The Times’s Charlie Savage explains that courts have been skeptical about the F.C.C.’s ability to weigh in on lawsuits. And agencies can’t override acts of Congress.

• But the order escalates debate in Congress over the future of Section 230, with some lawmakers having already questioned whether the provision should be amended. Joe Biden is also on the record calling for Section 230 to be revoked.

• The Times’s Peter Baker and Dai Wakabayashi noted a potentially unintended consequence of the executive order: Social media platforms may not want to risk the liability that would come from carrying Mr. Trump’s problematic posts.

Twitter appeared unfazed by the threat. This morning it flagged a tweet by Mr. Trump suggesting that protesters in Minneapolis could be shot — a message that the company said violated policies against glorifying violence. (The tweet, which is still online, is accessible only after clicking through a warning message.) That came after the social network fact-checked a tweet this week by Mr. Trump about mail-in voting — “we knew from a comms perspective that all hell would break loose,” a Twitter executive explained — and has continued labeling tweets by others as potentially misleading.

• Facebook, meanwhile, has sought to distance itself from the controversy. Mark Zuckerberg told Fox News this week that his company “shouldn’t be the arbiter of truth.” But Business Insider notes that the company was targeted by Mr. Trump’s order anyway.

The U.S. and China escalated their tough talk, leading to fears about all-out “financial war.” Global stocks fell this morning, and U.S. stock futures are pointing down. President Trump is holding a news conference on China later today.

Americans are worried about the end of pandemic aid measures, most of which are set to expire by the summer. “This economy is clearly going to need more support,” Aneta Markowska, Jefferies’ chief economist, told The Times’s Ben Casselman.

Are Facebook’s actions rooted in fears of Washington? In light of reports about the company’s downplaying internal research into polarization on its platform, our colleague Shira Ovide writes in her On Tech newsletter: “If Facebook picked its paths based on which political actors would get angry, that should make people of all political beliefs cringe.”

The U.S. dollar has gained about 7 percent this year against a basket of major currencies. But as interest rates hit rock bottom, the printing presses rev up and the government borrows big, can it retain its haven status?

So far, it’s going according to plan. A recent research note from Oxford Economics found that since 1973, the dollar has appreciated an average of 6 percent in the past six recessions. It expects this to remain true during the coronavirus downturn, but not for the usual reasons. Foreign investors dumped Treasury bonds at a record rate in March, which would normally push the dollar down. But since the Fed introduced its huge stimulus programs, the stock market has become a “safe refuge,” propelled by tech stocks.

Will the “magic money” run out? In a forthcoming essay in Foreign Affairs, Sebastian Mallaby writes about the “opportunity and peril” of the new era of aggressive government spending. In past periods of high national debt, leaders have tried to co-opt the central bank. If that happens with the Fed, Mr. Mallaby writes, “the age of magic money could end in catastrophe,” namely a dollar crisis that could throw the world back into turmoil.

But what about inflation? So what, The Times’s Neil Irwin writes. (We are paraphrasing.) If anything, he notes, “if the Fed has to raise interest rates and Congress has to cut budget deficits to stop inflation from settling in at excessive rates, that will reflect an economy that has returned to full health.”

Speaking of dollars, America’s largest dollar-store chains reported their latest quarterly results yesterday, blowing away expectations for sales and profits. They generally do well during periods of high unemployment and weak economic growth, and the coronavirus crisis is no exception. Classified as essential retailers, their stores have stayed open throughout the pandemic.

The chains are on a hiring spree. Dollar General said it had hired more than 50,000 people since mid-March, and Dollar Tree hired more than 25,000 over a similar period. Both are paying special bonuses for workers during the pandemic; Dollar General said these totaled $60 million in its latest quarter. Still, stories have emerged of substandard working conditions at the stores, before and since the coronavirus outbreak.

• Both companies’ stock prices are up nearly 20 percent this year, easily outperforming the market and nearly doubling the rises recorded by Walmart and Target.

Peter J. Henning is a professor at the Wayne State University law school, and previously served in the enforcement division of the S.E.C. and in the fraud section of the U.S. Justice Department. Here, he looks at a wrinkle in the plea bargain for some of the highest-profile defendants in the college admissions scandal.

More than a year after their arrests, the actress Lori Loughlin and her husband, the fashion designer Mossimo Giannulli, pleaded guilty to conspiring to get their daughters admitted to U.S.C. as part of the “Varsity Blues” scandal. If the agreement with prosecutors is approved by the judge in the case, Ms. Loughlin would serve two months in prison and Mr. Giannulli would serve five, in addition to fines and community service.

But there is a provision in the plea agreement that could allow the couple — among the highest-profile parents in the scheme — to argue for an even more favorable deal.

They are permitted to argue that “the prosecutor in this case engaged in misconduct that entitles defendant to relief from defendant’s conviction or sentence.” This a rare provision, and as a result, Ms. Loughlin is likely to serve just four or five weeks of her term.

The defendants have argued that Rick Singer, the mastermind behind the admissions scheme, enticed them into making statements that entrapped them. The F.B.I. had Mr. Singer record his conversations with the defendants, and the defense says he was coached to lie to the parents about the nature of the payments he advised them to make.

The judge overseeing the case, Nathaniel Gorton of the Federal District Court for Massachusetts, called the accusations “serious and disturbing.” This hints at the potential for a reduced sentence.

The U.S. attorney’s office wants to avoid a trial, because putting Mr. Singer on the witness stand may result in a finding of prosecutorial misconduct. By accepting the plea agreements, the Justice Department can claim victory — even though not everything went to plan.

• Shares in JDE Peet surged in their market debut this morning, valuing the packaged-coffee company at more than $17 billion. (Reuters)

• The last act of Joseph Otting, who is stepping down today as one of America’s top banking regulators: easing anti-redlining rules, despite opposition from bank trade groups. (NYT)

• How private jet owners got a subsidy from coronavirus relief funds. (NBC News)