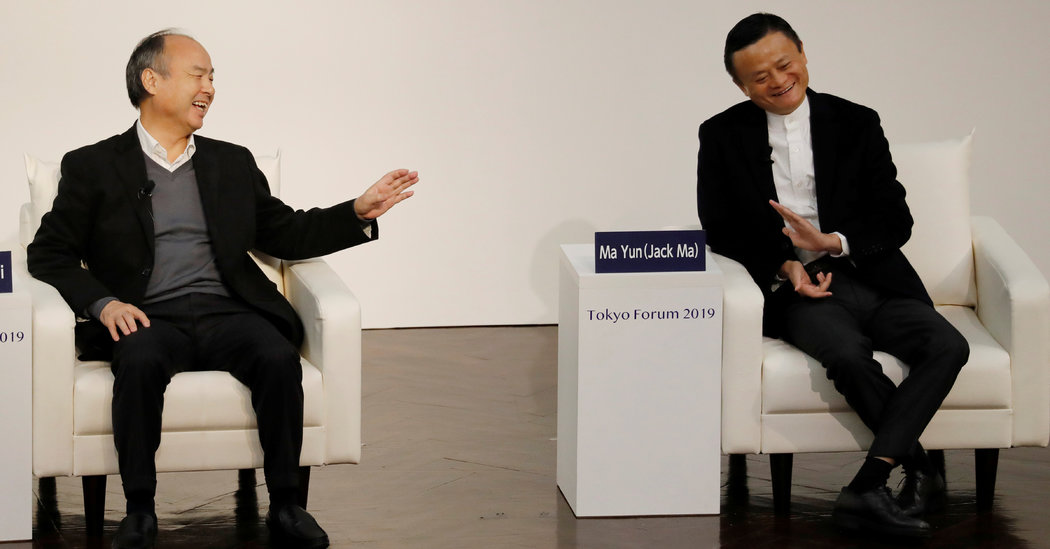 Our next DealBook Debrief call is on Thursday, May 21 at 11 a.m. Eastern, and we’ll be discussing the coming wave of bankruptcies with The Times’s retail reporter Sapna Maheshwari and DealBook’s own Michael J. de la Merced, a veteran reporter on the restructuring industry. R.S.V.P. here. (Want this in your inbox each morning? Sign up here.)

SoftBank posted today a $13 billion operating loss, and $9 billion overall loss, for its most recent fiscal year. It showed how much the Japanese company’s once-vaunted technology investment fund has dragged it down.

The company reported over $17 billion in unrealized losses on investments. Nearly $10 billion of that came from two companies: Uber and WeWork, both of which were struggling before the coronavirus pandemic took hold.

• The losses were slightly more than the warnings issued in recent weeks to soften the blow. The group’s net loss, for example, was about 7 percent worse than suggested.

Jack Ma, the Alibaba co-founder, resigned from SoftBank’s board. SoftBank’s founder, Masayoshi Son, was one of the first major investors in Alibaba, and his company’s holding in the Chinese e-commerce giant is now worth over $100 billion. No reason was given for Mr. Ma’s departure, but it doesn’t look good alongside all the other news.

It’s a major blow to Mr. Son, who created the $100 billion Vision Fund on the idea that he is, well, a visionary investor.

• SoftBank’s fund-raising efforts for a second Vision Fund were already faltering, and the investment losses are unlikely to help.

SoftBank is trying to shore up its cash holdings and stock price. SoftBank said that it is raising about $11.5 billion by pledging to sell Alibaba shares through financial derivatives. The Wall Street Journal reports that the company is in talks to sell part of its stake in T-Mobile US to Deutsche Telekom. SoftBank has also continued to buy back its shares.

‘It may take awhile’

Jay Powell, the Fed chairman, went on “60 Minutes” on Sunday to deliver hard truths — and some reassurance — about the precarious state of the U.S. economy.

He warned that recovery may take more than a year. “It may take a period of time; it could stretch through the end of next year — we really don’t know,” he said.

Mr. Powell pressed Congress to do more “to avoid longer-run damage to the economy,” though he didn’t offer specifics. He said that stimulus efforts may be necessary for six more months.

• “We’ll get through this,” Mr. Powell added, stressing that the central bank was “not out of ammunition.”

It recalled prime-time appearances by the former Fed chair Ben Bernanke, who went on “60 Minutes” in early 2009 to talk about the Fed’s response to the 2008 financial meltdown. Mr. Bernanke returned 18 months later, justifying a new round of bond-buying stimulus by warning that high unemployment could last for years.

• The unemployment rate was then around 10 percent, half what it’s expected to reach in the coming months. Should Mr. Powell return to “60 Minutes” in early 2022, what message would he deliver?

Further reading: David McCormick, the C.E.O. of the hedge fund Bridgewater who was a Treasury under secretary during the 2008 crisis, writes in The Financial Times that “America must step up to retain its economic might.”

Companies that took out loans from the Paycheck Protection Program and want to return the money — because they did not qualify or because they want to avoid scrutiny — must do so by today.

Shake Shack and the nonprofit Aspen Institute are among the organizations that have returned their loans, highlighting confusion about the program. Some of that confusion stems from shifting guidelines. For example, the Treasury Department recently relaxed a requirement for companies that took out rescue loans to rehire a certain number of employees.

• Some companies that sought rescue loans say they had to battle private lenders first.

🛍 It’s a big week for retail earnings, with Walmart and Kohl’s reporting on Tuesday, Target and Marks & Spencer on Wednesday, and Best Buy and TJX on Thursday. Amazon set a high bar a few weeks ago, reporting a 26 percent jump in first-quarter sales.

🏛 The Fed chairman, Jay Powell, and the Treasury secretary, Steven Mnuchin, are to testify on Tuesday at a virtual hearing of the Senate Banking Committee, giving updates on coronavirus stimulus measures.

🤷‍♀️ What’s next for L Brands? The parent of Bath & Body Works unexpectedly walked away from a deal this month to sell a majority stake in Victoria’s Secret. It will face questions about its Plan B on its earnings call on Wednesday.

🏘 During lockdowns, people are doing more repairs, remodeling and intense cleaning than before; Home Depot and Lowe’s quantify the impact of that in their latest earnings on Tuesday and Wednesday, respectively. Moving is tricky these days, and data on housing starts (Tuesday) and existing home sales (Wednesday) are expected to show steep declines for April.

🇨🇳 The National People’s Congress gets underway in Beijing on Friday, two months later than expected. Responding to the pandemic and rebutting criticism of China’s initial response is expected to dominate the proceedings. In corporate news, the Chinese e-commerce behemoth Alibaba is to report its latest earnings on Friday.

Berkshire is still a big investor in banks, notes the analyst Mike Mayo, keeping large stakes in Bank of America and Wells Fargo (worth about $30 billion combined), and adding to its holding in PNC Financial.

Companies and the coronavirus, in three charts

Earnings season is near an end, and the discussion this quarter has been dominated by — what else? — the pandemic.

Researchers are parsing earnings calls for clues about the depth of the downturn and the shape of recovery. Fed researchers sifted through thousands of call transcripts, and concluded that executives seem much more worried about financing than they were during the 2008 crisis.

You don’t need an algorithm to see how companies are responding. The phrases that executives use often show how they’re managing the crisis.

“I am humbled by the magnificent leadership stories I hear on a daily basis.” — Joseph Wolk, C.F.O. of Johnson & Johnson

“During this crisis, our first and foremost priority has been the security and health of our employees.” — Kasper Rorsted, C.E.O. of Adidas

“We are still assessing this literally day by day as these patterns continue to evolve quite rapidly.” — Richard Allison, C.E.O. of Domino’s Pizza

“Of course, we are following the advice of local authorities wherever our teams are based.” — Ben van Beurden, C.E.O. of Shell

… When things “return to normal,” their companies will emerge “stronger than ever.”

“A return to normal economic activity depends on how effectively societies manage the spread of the virus.” — Sundar Pichai, C.E.O. of Alphabet

“Together, we will face these unprecedented challenges and emerge from this crisis stronger than ever.” — Stephen Schwarzman, C.E.O. of Blackstone

• Facebook agreed to buy Giphy, a repository for the internet’s favorite goofy images, for about $400 million. (Axios)

• How Washington learned to embrace the budget deficit. (NYT)

• The Justice Department and state attorneys general plan to sue Google over antitrust matters as soon as this summer. (NYT)

• Mail-forwarding requests show that the Hamptons, Philadelphia and Miami were among the top destinations of New Yorkers seeking to escape pandemic lockdowns. (NYT)