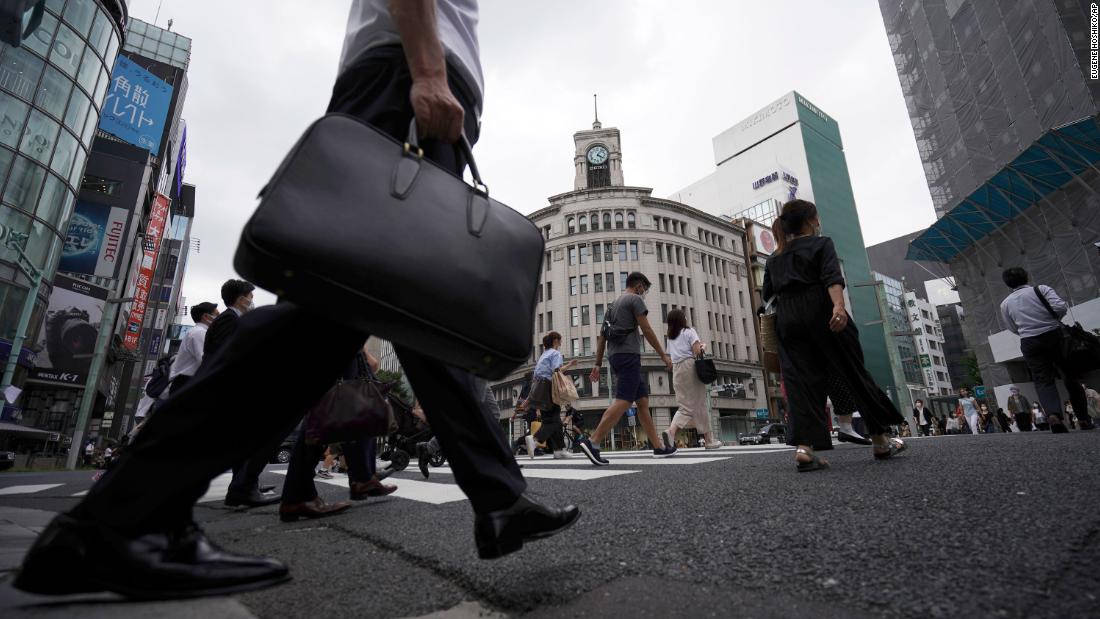 But Kodaira isn’t counted among the 1.9 million people in Japan who didn’t have jobs in May, accounting for 2.9% of the workforce.

Instead she’s one of the 4.2 million people who are still getting paid a portion of their salaries — in her case, about 75% — for the time she’s not at work. While the number of such people improved slightly in May from April’s record six million, it’s still nearly three times higher than it was in January 2009, during the global financial crisis.

Takuya Hoshino, an economist at Dai-Ichi Life Research Institute, has calculated that Japan would have a jobless rate of 10.2% for May if those on leave were factored in.

“Even after the state of emergency was lifted, the number of people on leave is still very high. That’s unexpected and very grim,” Hoshino said.

While the millions of people in Nanami’s position suggest that Japan has avoided the mass layoffs seen in countries like the United States, economists say it still masks a serious threat facing Japan, which is already mired in recession.

That’s because Japan’s practice of holding onto workers through economic tumult could actually backfire, they say, since doing so could make companies and their employees less nimble. One-fifth of the working population has been employed with the same company for more than 20 years in Japan, or double the comparable figure in the United States, according to government data.

“The biggest issue in Japan’s labor market is the stubborn insistence on pay by seniority. If genuine merit-based pay were introduced, there would be much more job switching and career climbing,” said Jesper Koll, a senior adviser to the fund management company WisdomTree.

Legal hurdles also make it more challenging for companies in Japan to cut jobs compared to their western counterparts. The Labor Contract Act, for example, states that a dismissal would be invalid if it is “not considered to be appropriate in general societal terms.”

Even then, the social contract in Japan that trades loyalty for job security is so strong that breaking it would undermine a company’s ability to recruit future talent. At the height of the virus outbreak, for example, Toyota (TM) CEO Akio Toyoda promised to protect jobs by offering this history lesson: Toyota made pots and pans and farmed potatoes after World War II because it was determined to do whatever would allow it to save its employees.

That kind of attitude has led many Japanese companies to ask workers to stay home with some pay, rather than cutting their jobs outright. By law, they must pay at least 60% of wages during company-mandated leave. The government, meanwhile, has promised to pay up to 90% of those costs through subsidies as part of the stimulus measures it rolled out to cushion the economic fallout from the outbreak.

“In the US, the individual claims their unemployment benefits directly from the state. In Japan, the government begs companies not to fire and they will help pay salaries in exchange. It’s a very different cultural approach,” said Dai-Ichi Life’s Hoshino.

What’s more, like in western countries, a person in Japan has to be actively looking for a job to be counted as unemployed — a practice analysts have long criticized because it may conceal the true jobless rate. That discounts the vast number of Japan’s employable population — mostly women — who leave jobs for marriage, childbirth or elderly care and never return because the job market is too rigid. That number, economists say, is likely to be rising as the realities of recession deter job hunting even further.

In response to the toll the coronavirus has taken on the economy, Japan rolled out one of the world’s largest fiscal stimulus packages. So far, its plan has totaled $2.2 trillion in spending, mostly centered around cash handouts and loans to help small businesses. It was the country’s 20th economic stimulus package since 1998.

The effectiveness of that financial help, meanwhile, will face a critical test in September when the stimulus measures expire. Some economists predict the unemployment rate could exceed 4% by the end of the year, which would mark the highest since August 2013.

Japan slipped back into recession in the first quarter, and economists say the nation may be in the midst of its worst downturn since the end of the World War II. According to a Nikkei poll of 16 economists, Japan’s GDP is expected to have dropped by an annualized 21.7% during the April-to-June quarter.

Over the long term, analysts say Japanese companies may lose flexibility and productivity by keeping workers employed, even if those people can’t actually do their jobs. But employers in Japan have for years been slow to change, even after the global financial crisis and the earthquake and nuclear disaster at Fukushima in 2011 triggered widespread debate about the need to create a more flexible job market.

“In terms of overall liquidity in the job market, there is still no clear path ahead,” said Hoshino.

So entrenched are Japan’s labor practices that new words have cropped up to describe the idly employed, from calling them the “madogiwazoku” (a phrase meaning “tribes at the windowsill”) during the 1970s, to the more recent phenomenon of “in-house unemployment” — the concept of a worker who goes to his or her job but is assigned nothing to do.

Some economists expect tight labor conditions to emerge again relatively quickly, though, since the country’s aging population is leading its labor force to shrink. There were 120 jobs for every 100 job seekers in May, according to the latest government statistics.

“The labor shortage is real and the war for talent will intensify as economies normalize,” WisdomTree’s Koll said. “Japan’s nexus to Asia in general, and China in particular, means that the manufacturing sector here will pull out of recession well before America recovers.”

“It’s not the same,” she said. “I need to be in the salon to catch the latest trends. Plus, I miss talking to my clients.”