Jay Clayton, Low-Profile Regulator, Is Catapulted Into a Political Fight 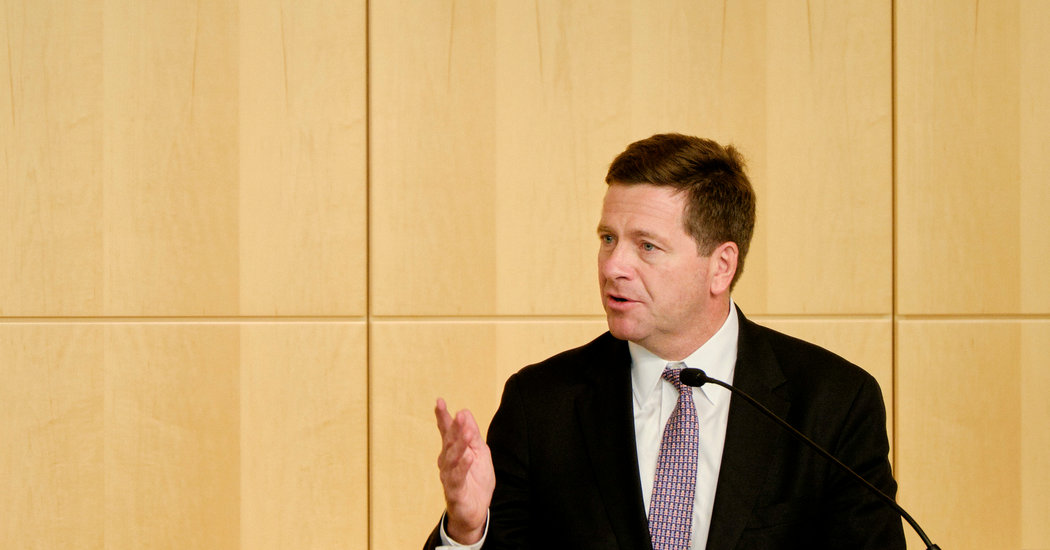 After three years at the helm of the Securities and Exchange Commission, Jay Clayton had made it known to colleagues, friends and the Trump administration that he was itching to go back to New York.

The longtime and highly-paid corporate lawyer, who had spent his career at Sullivan & Cromwell representing some of the world’s biggest financial institutions, including Goldman Sachs and Deutsche Bank, wanted to be closer to his family.

In a private discussion with Attorney General William P. Barr, Mr. Clayton, 53, expressed interest in becoming the top prosecutor for the Southern District of New York, according to a Justice Department official. After a lifetime of practicing securities law and prepping companies for initial public offerings, Mr. Clayton told friends he saw the job as a way to establish his litigation credentials, according to people who know him.

Mr. Barr did not object — the two lawyers have known each other for years — and Mr. Clayton has a good relationship with President Trump. The two played golf together last Saturday at the president’s club in Bedminster, N.J., according to people familiar with the matter, and he has golfed with the president several times in the past.

In recent days, talks about Mr. Clayton succeeding Geoffrey S. Berman, the current United States attorney for the Southern District of New York, picked up, according to a person briefed on the matter.

On Friday night, Mr. Clayton appeared close to getting the job he wanted. But within an hour, that dream job had morphed into a nightmare as Mr. Clayton found himself embroiled in a huge political fight after Mr. Berman refused to resign and the administration was accused of trying to force out a prosecutor whose office has been at the forefront of corruption inquiries into Mr. Trump’s inner circle.

On Saturday afternoon, Mr. Barr told Mr. Berman in a letter that Mr. Trump had fired him and that he had named the deputy U.S. attorney, Audrey Strauss, as acting head.

Even before the firing, Republicans suggested that confirming Mr. Clayton would not be easy. Democrats called on him to withdraw his name or face reputational ruin.

Both Mr. Schumer and Ms. Gillibrand said Mr. Clayton should drop out of contention and said not doing so was akin to allowing the administration to muzzle an independent prosecutor.

“Jay Clayton can allow himself to be used in the brazen Trump-Barr scheme to interfere in investigations by the U.S. Attorney for SDNY, or he can stand up to this corruption, withdraw his name from consideration, and save his own reputation from overnight ruin,” Mr. Schumer said on Twitter.

It is unclear whether Mr. Clayton was aware of the controversy that his nomination was going to elicit. Those that know Mr. Clayton said they found it hard to believe that he would have agreed to be nominated had he known Mr. Berman was not planning to step down. Mr. Berman said on Friday night that he only learned that he was “stepping down” from a Justice Department news release. Mr. Clayton and Mr. Berman know each other professionally and have established a good working relationship, according to people familiar with the matter.

While Mr. Clayton has golfed with Mr. Trump, he is not viewed as a political acolyte or someone who courts controversy in the way the president seems to relish. He did not contribute to the president’s 2016 campaign but has given money to candidates of both parties over the years. Mr. Clayton is not a registered Republican or Democrat.

His tenure at the S.E.C. has been fairly muted and Mr. Clayton has not played a high-profile role within the administration. But public scrutiny of Mr. Clayton is likely to increase with his nomination, particularly if he intends to see it through.

Mr. Clayton “will surely find himself under considerable pressure from his professional circle not to become a pawn in what will likely be a serious fight,” said Daniel C. Richman, a former federal prosecutor and Columbia Law School professor.

Rebecca Roiphe, a New York Law School professor of ethics, put it more simply: “I think he should withdraw his name,” she said. “The process has become politicized and the public would have little faith in him at this point, especially because he doesn’t have the traditional experience and profile of most people who have had the job in the past.”

Mr. Clayton has said little since the Friday night uproar. The only statement he has made was an email he sent, just after midnight on early Saturday, to all S.E.C. employees in which he said “pending confirmation, I will remain fully committed to the work of the Commission and the supportive community we have built,” according to a copy reviewed by The New York Times.

Just a day earlier, Mr. Clayton had emailed his staff to say that, while they were continuing to work remotely for the summer months, he looked forward to seeing them again in person, offering no indication that he was planning to leave the agency, according to a person briefed on the email.

Even without the controversy, Mr. Clayton was facing a tough path to confirmation. He is not a litigator or a former prosecutor — often prerequisites to being named as a U.S. attorney, particularly for a prestigious office like the Southern District, which is known for its independence, policing Wall Street and going after major corporate fraud cases. It has aggressively pursued cases involving insider trading and Ponzi schemes, including prosecuting Bernard L. Madoff, Steven A. Cohen’s SAC Capital Advisors (known now as Point72 Asset Management) and Representative Chris Collins of New York.

Before being named S.E.C. chair, Mr. Clayton was a partner at Sullivan & Cromwell, where he did work for banks, hedge funds and big corporations such as Goldman Sachs, Barclays and Alibaba. Within the firm he had a reputation as being a well-placed but cautious person not known for his political views.

His pick was seen as evidence that the Trump administration wanted someone in the position with strong ties to corporate America who might be inclined to take a lighter touch to enforcing securities laws and punishing corporate wrongdoers.

In many ways he was the classic Republican pick. At the time, he said he would divest himself of 175 investment funds and stock holdings that either he or his wife, who then worked at Goldman Sachs, held. The disclosure form listed Mr. Clayton and his family’s wealth at around $50 million.

One of the few whiffs of intrigue surrounding his nomination was that billionaire investor Carl C. Icahn, a one-time unpaid special adviser to Mr. Trump, had met with Mr. Clayton before his confirmation hearing before the Senate.

In joining the S.E.C., he took with him another Sullivan & Cromwell partner, Steven Peikin, a former federal prosecutor in Manhattan and longtime defense lawyer. Mr. Peikin was an assistant prosecutor in Manhattan during the time that James B. Comey, the former director of the F.B.I. who was fired by Mr. Trump, served as U.S. attorney for the Southern District.

The S.E.C. under Mr. Clayton has been aggressive in cracking down on fraudulent offerings of Bitcoin and other cryptocurrencies.

In his first speech as S.E.C. chairman, Mr. Clayton said his No. 1 concern was looking out for the “long-term interests of the Main Street investor.” In the speech before the Economic Club of New York, he peppered his talk with folksy language, referring to ordinary investors as “Mr. and Ms. 401(k).”

Mr. Clayton’s focus on mom-and-pop investors was seen just a few days ago when the S.E.C. raised serious questions about a plan by Hertz to raise up to $500 million in cash by selling stock to investors amid its bankruptcy case. In a bankruptcy proceeding, shares of a company are often wiped out and worthless so the stock offering raised considerable eyebrows on Wall Street.

On Thursday, the car rental company said it was withdrawing the planned stock sale in light of the S.E.C. inquiry.

But the commission’s actions sometimes appeared at odds with Mr. Clayton’s stated focus on ordinary investors.

The S.E.C. has proposed changes in auditor independence rules that some feared could relax standards meant to prevent conflicts of interest. And last summer the commission adopted a so-called best interest rule governing the conduct of stockbrokers that consumer advocates said actually did little to protect investors. Critics said the rule did not go far enough in defining what it means for a broker to act in a customer’s best interest.

There have also been few high-profile corporate enforcement actions during Mr. Clayton’s tenure. Many of the billions of dollars of fines that the S.E.C. has taken in have come from cracking down on Ponzi schemes. Last year, the commission imposed a $1 billion penalty on the Woodbridge Group of Companies and its former owner, which securities regulators contend had run a real estate scheme that defrauded 8,400 retail investors.

A review by The New York Times in 2018 found a significant decline in the size of penalties imposed by the S.E.C. on corporate wrongdoers under the Trump administration than in the final 20 months of the Obama administration.

His tenure, however, may be best remembered for sanctions the S.E.C. brought against Elon Musk to step aside as chairman of Tesla for three years and pay a $20 million fine because of misleading information he posted on Twitter about a potential buyout of the electric car company.

In that case, the S.E.C. moved far faster than it usually does — filing a civil fraud action against Mr. Musk just weeks after his post set off a firestorm. But some critics felt the settlement that regulators struck with Mr. Musk did not go far enough to punish the voluble entrepreneur.